Please ensure Javascript is enabled for purposes of website accessibility
Log In Help Join The Motley Fool
Free Article Join Over 1 Million Premium Members And Get More In-Depth Stock Guidance and Research
By Bradley Freeman - Feb 18, 2021 at 8:15AM

Why this company is the best way to invest in a growing space.

Drawn by the lure of tax dollars, states around the nation are quickly allowing sports gambling one at a time; and Governors like New York's Andrew Cuomo are hinting at more legalization to come. As a result, the market is expected to explode to $127.3 billion in sales by 2027, thanks to a brisk growth rate of 11.5% during that time.

Such strong sector tailwinds have attracted dozens of new entrants vying to capture this expansion. While there are many interesting ways to invest in the space, Penn National Gaming (PENN -8.63%) is by far the best. Here's why. 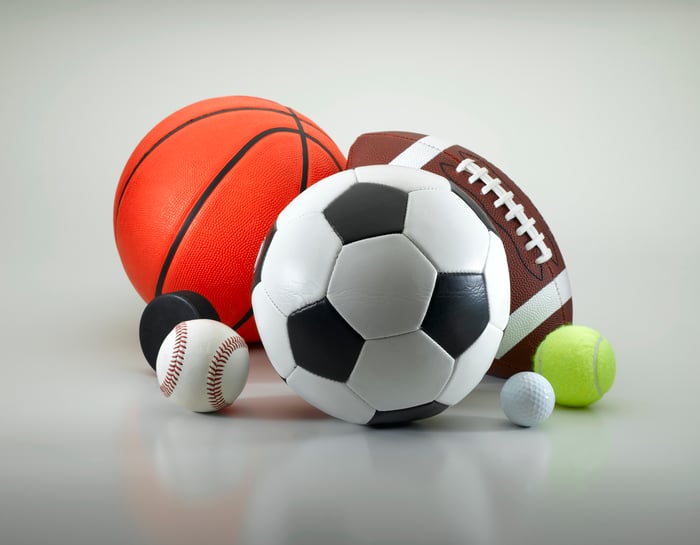 For the fourth quarter ended Dec. 31, revenue fell 23% year over year. The company had been trending ahead of analyst forecasts, but was forced to shut down some of its Midwest casinos due to the pandemic. While the decline isn't ideal, it was far less drastic than competition like MGM Resorts International and should remedy itself as the pandemic continues to ebb.

Despite this challenge, its operating margin and earnings before interest, taxes, and non-cash costs like depreciation and amortization (EBITDA) margin both expanded briskly, and its net income turned positive year over year. The positive profit trends are nice, but to continue delivering shareholder returns going forward, the company will need to grow its revenue once more. This is where Barstool Sports comes in.

Barstool Sports and Penn are thriving together

Penn National Gaming purchased a 36% stake in the sports-media company Barstool Sports in 2020 for $450 million. Together the duo released its Barstool Sportsbook app in Pennsylvania late last year, and broke download records despite being far outspent on marketing by the likes of DraftKings. How did this happen?

Barstool's army of 66 million monthly active users (as of 12 months ago) is how. These consumers gamble weekly at a 44% clip, in other words, just over 29 million weekly sports gamblers consistently consume Barstool's content. No competitor in the space has a built-in following like this, and it shows in download data, as well as in how Barstool's product is racking up market share in Pennsylvania thus far.

In just a few months, the company has built its total bet market share to 13.4% against far more aggressive incumbent competition -- Barstool's share continues to rise. More impressively, its revenue market share was a strong 40% as of Pennsylvania's most recent data release in December 2020. This again hints at Barstool having to spend and promote far less to rack up sales; its accepted bets are more directly translating into revenue.

Pennsylvania was just the beginning -- earlier this year, the product also debuted in the state of Michigan. This time, Penn and Barstool did have first-mover advantage, unlike in Pennsylvania, and the pair certainly capitalized. For the product's opening weekend in Michigan, its total first-time depositors and bet handle were both 68% higher than in Pennsylvania. These consumers are also engaging with the product on a daily basis 80% more frequently than versus Pennsylvania -- great for Barstool's advertising sales.

The digital sportsbook is set to open in at least eight more states this year, and if the first two debuts were any indication, that should be a very positive event for the company.

While the sportsbook garners a great deal of investor attention, Barstool provides so much more than that to Penn.

The sports media conglomerate hosts two of the nation's most popular 20 podcasts, and enjoys meaningful advertising and merchandise revenue streams. Perhaps as a result, despite sports' 2020 hiatus, the organization set sales and profitability records while some other sports media companies struggled.

The brand is also allowing Penn to improve and expand its brick-and-mortar footprint. Together, the combination plans to open Barstool-themed entertainment destinations in cities. When looking at the effect Barstool's name had on its East Chicago property, the decision makes perfect sense.

In the week following Penn's rebranding of its East Chicago casino to Barstool, betting handle rose by 35%, while table and slot volumes also immediately shot up more than 20% each. Additionally, in the brief time Barstool Sportsbook has been open in Michigan, 15% of its users have already converted to Penn National Gaming's loyalty program -- Barstool's clout is helping everywhere.

Penn is best in breed

There are dozens of ways to invest in sports gambling, but none with the relevant, gigantic following Barstool features. Its army of sports-loving, gambling fans is as ideal as it gets for Penn, and despite the share price's recent success, I believe we are in the early innings of its domination. This one is a large part of my portfolio, and I think you should consider it as well.