Please ensure Javascript is enabled for purposes of website accessibility
Log In Help Join The Motley Fool
Free Article Join Over 1 Million Premium Members And Get More In-Depth Stock Guidance and Research
By Keith Speights - Feb 18, 2021 at 6:05AM

The company's revenue soared, but so did its expenses.

Invitae (NVTA -9.47%) delivered a sizzling performance in 2020, with its shares skyrocketing 159%. That sizzle fizzled somewhat last month, though, after the medical genetics company announced a dilution-causing stock offering.

The company reported its fourth-quarter results after the market closed on Wednesday. The healthcare stock slipped a little in after-hours trading. Here are the highlights from Invitae's latest quarterly update. 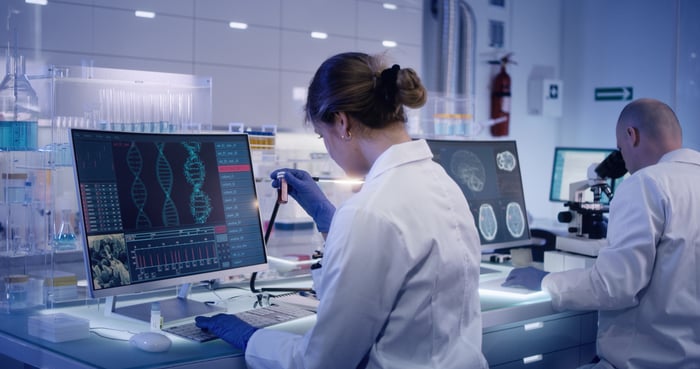 Invitae reported revenue in the fourth quarter of $100.4 million, a 51% year-over-year jump. This result topped the Wall Street consensus estimate of $98.4 million.

The company announced a net loss in the fourth quarter of $241 million, or $1.34 per share, based on generally accepted accounting principles (GAAP). In the prior-year period, Invitae posted a GAAP net loss of $76.9 million, or $0.79 per share.

Invitae's bottom line looked somewhat better on an adjusted non-GAAP basis. The company recorded a Q4 adjusted net loss of $113.1 million, or $0.63 per share. In the prior-year period, Invitae's net loss totaled $61 million. Analysts had projected a Q4 net loss of $0.55 per share.

There's no secret behind much of Invitae's growth. The medical genetics company completed the acquisition of ArcherDX on Oct. 5, 2020. This deal gave Invitae a broader offering of testing services.

However, the ArcherDX transaction was also largely responsible for Invitae's big increase in expenses during the fourth quarter. The company's general and administrative expenses soared more than tenfold year over year to $242.6 million. Most of this increase was directly related to the ArcherDX acquisition.

Invitae's research and development costs and selling and marketing expense also jumped significantly compared to the prior-year period. Again, the ArcherDX deal was a key factor behind these increases.

The company continues to project revenue growth of between 50% and 60% annually over the next few years. Invitae looks for full-year 2021 revenue of more than $450 million.

CEO Sean George stated that Invitae is "committed to maintaining the pace [the company has] set, making it ever-easier to integrate genetic information into healthcare decision-making by clinicians and patients at all stages of life." With the genetic testing market growing, Invitae should have strong growth prospects for the foreseeable future.