Please ensure Javascript is enabled for purposes of website accessibility
Log In Help Join The Motley Fool
Free Article Join Over 1 Million Premium Members And Get More In-Depth Stock Guidance and Research
By Taylor Carmichael – Feb 20, 2021 at 7:40AM

Trying to pick the stock that will win the year is a fun game to play. Not to mention, if you're smart in your selection, you can come away with massive returns. I came pretty close last year with my Novavax pick; the stock shot up 2,700% in 2020. Can I name the winner of 2021? It's unlikely, but I'll give it a shot -- Infinity Pharmaceuticals (INFI 2.10%). It's just a tiny biotech right now, with a market cap of $244 million. I'm hopeful that Infinity will have amazing returns this year. My family's investment in Infinity is small, because the risk is very large.

Shopify (SHOP 3.29%), on the other hand, is a major investment for us in 2021. That's because my conviction level is so high. Shopify gets my vote as the stock most likely to go up this year, next year, and over the next 10 years. If you're trying to get the highest possible returns in 2021, Infinity is my pick. But if you want to invest for the long term, Shopify is my favorite stock. Read more to find out why I like both of these names. 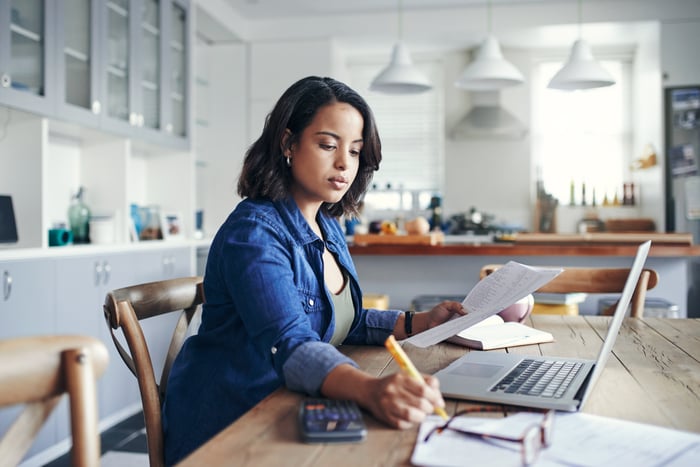 The risk/reward ratio for Infinity is appealing

One of the most interesting areas in biotechnology right now is the reprogramming of macrophages (a type of white blood cell that kills microorganisms) through the CD47 protein. CD47-focused drugs work by instructing our immune systems to use our natural defenses to attack certain blood cancers. Last year, Gilead Sciences acquired a company called Forty-Seven for $4.9 billion. (As its name suggests, Forty-Seven is focused on CD47). Right after the deal was announced, the stock of another biotech working on CD47, Trillium Therapeutics, ran up from $5 a share to $7.65. For the year, Trillium was a 13-bagger, making it one of the strongest healthcare stocks in 2020.

Like the CD47 stocks, Infinity Pharmaceuticals is also focused on reprogramming the macrophage. Its area of focus is the PI3K protein, and it's going after solid tumors by reprogramming our immune system. My investment thesis is that the market will discover Infinity this year, and the stock will have a nice run as it goes from micro-cap to small cap (similar to what Trillium did in 2020).

Infinity's lead candidate, eganelisib, is being evaluated in clinical trials for urothelial cancer, triple negative breast cancer, melanoma, and squamous-cell cancer of the head and neck. Bristol Myers Squibb (BMY 0.28%) and Infinity are running a phase 2 trial testing eganelisib in combo with nivolumab in urothelial cancer. And Roche Holdings (RHHBY -0.36%) has a phase 2 trial studying eganelisib in combination with two of its drugs for triple negative breast cancer.

I'm always happy to see big pharma interested in working with one of my micro-cap stocks. Infinity owns 100% of its drug candidate, so it hasn't sold off its future to acquire these partners. Bristol Myers Squibb and Roche are collaborating with Infinity because these companies believe that the micro cap's macrophage reprogrammer will make its checkpoint inhibitors more effective in defeating cancer.

So far, the phase 2 data has been positive. The stock is already up more than 75% in 2021. And the company has achieved Fast Track designation from the U.S. Food and Drug Administration (FDA) for eganelisib in both breast cancer and urothelial cancer. Infinity has $40 million in cash and is raising another $80 million via a secondary stock offering, with almost no debt.

Internet commerce has been a dominant trend for over 20 years, starting with the magnificent rise of Amazon late in the 1990s. Amazon has been a fantastic stock for investors, as its climbed from its IPO valuation of $438 million to a recent market cap of $1.6 trillion. As powerful a retailer as Amazon is, it owns just a slice of the $24 trillion retail market. So it still has room to grow. But there are also a lot of younger retailers that want to compete with Amazon. And more and more of those retailers are turning to Shopify to equip them for battle.

Shopify helps all the retailers in its network by giving them tools to conduct internet sales. These include website construction, logistics, marketing, payments, secure checkout, shipping, and other services.

Shopify has over 1 million internet retailers in its network, from the smallest mom-and-pop operations to Walmart. The company itself was originally a tiny start-up trying to sell snowboards online. The founders, Tobias Lutke and Scott Lake, were frustrated with the software available at the time. As Lutke put it, "The final straw was when I got a custom design made for my snowboard store and I couldn't get it to work in Yahoo stores." So the two men started from scratch, building the software that would be the genesis of Shopify. 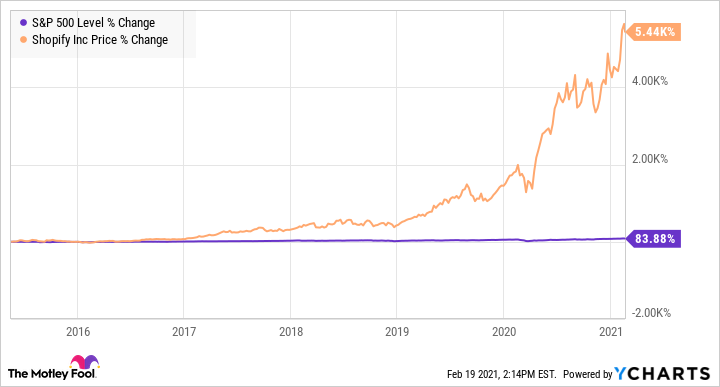 The stock has been incredible, running up 5,440% since its IPO in 2015. And it's up over 170% over the last 52 weeks. What makes Shopify so dominant is its huge network of happy subscribers. While it won't be the strongest stock in 2021, it's a no-brainer pick, the company most likely to be a 10-bagger over the next decade.

Investing for this year and the future

Fools should always invest for the long term. It's the safest way to invest, and the best way to maximize your wealth. Shopify is my favorite stock in this or any other year, for that very reason. Will it be the No. 1 stock in 2021? Almost certainly not. At a $172 billion market cap, Shopify is way too big to become a 10-bagger in a year.

Infinity, on the other hand, might pull it off. It's a micro-cap biotech that's currently undervalued by the market. The company has positive phase 2 trial data, impressive collaborators, and plenty of cash for a phase 3 trial. So I'm very bullish on Infinity over the next one to two years. Over the next 10 years, however, Shopify is my favorite stock.