Please ensure Javascript is enabled for purposes of website accessibility
Log In Help Join The Motley Fool
Free Article Join Over 1 Million Premium Members And Get More In-Depth Stock Guidance and Research
By Catherine Brock - Feb 21, 2021 at 8:17AM

You need a fund that solidly outpaces tuition inflation to save effectively for college.

Target may be the conventional place to register for baby shower gifts, but savvy parents will request college fund donations instead. Those donations, invested today in an ETF positioned for growth, will ultimately do far more for Junior than even Target's cutest pastel onesie.

Put compound earnings to work for you

Investing in an ETF in your kid's earliest days is a simple way to minimize out-of-pocket tuition costs. The longer you keep your money invested, the more you benefit from compounding earnings -- that's when your earnings start earning money too. 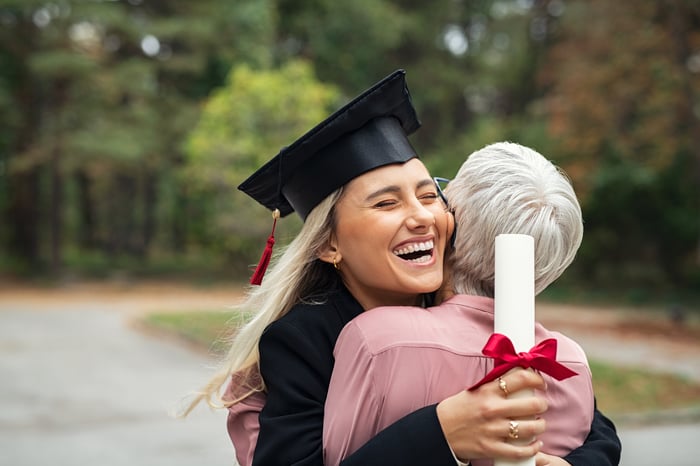 That increase in your returns from $9,000 in the first five years to $15,000 in the second five years shows you the power of compounding. Start early enough, and your kid's college fund will generate its own momentum, even if you don't add more funds after that initial deposit.

The rising cost of a college education

Planning for college expenses is extra complicated, because tuition costs go up around 5% every year. Today, four years of tuition at an in-state school might run you about $42,000. But in 15 years, 5% inflation drives that expense up to nearly $95,000.

A tech ETF for growth

A fund like the Vanguard Information Technology ETF (VGT 2.54%) might help you get there. VGT is entirely focused on the technology sector, and its shareholders have benefited from that approach. The portfolio replicates the MSCI US Investable Market Information Technology 25/50 Index, which includes 345 large to small tech companies. The top 10 holdings make up 57% of the portfolio, and they're all names you'll recognize: Apple, Microsoft, NVIDIA, and Visa top the list.

There are younger tech-focused funds that have shown high growth in recent years, but VGT has the advantage of history. The fund has been around since 2004 and has produced overall average annual returns just over 13% since inception. That includes an average annual return of nearly 30% over the last five years.

Saving for college would be vastly easier if you could count on that 30% annual growth indefinitely, but tech's strong run in recent years may not be sustainable. A better approach is to plan for 10% to 13% growth, in line with the fund's longer-term average.

At 10% to 13% growth, a starting balance of $15,000 to $22,000 would get you to $95,000 in 15 years, assuming you reinvest all dividends, and you pay any taxes out of your pocket (instead of pulling funds from the account). You could probably manage with a slightly lower starting investment, since you don't actually need the full $95,000 on the first day your kid heads off to college.

If you don't have that much money sitting around, invest what you do have and as soon as possible. That includes any cash gifts, either from the baby shower or birthday parties, plus whatever regular contributions you can afford over time. Even $20 to $50 each month will help your wealth-building momentum.

You may not reach the $95,000 milestone, but every penny of wealth you generate lessens your kid's dependence on student loans down the road. And that's a gift that keeps on giving.