Coming into its fourth-quarter earnings report, Appian (NASDAQ:APPN) had a lot to prove. The stock had nearly tripled since Nov. 5, the day before its third-quarter earnings report came out, which sparked a blockbuster rally over the subsequent weeks. There was little news out on Appian then, but a combination of strong third-quarter results and a growing awareness of the opportunity in low-code automation -- Appian's focus -- led to the stock's breakout.

Those gains were on the line when Appian reported fourth-quarter earnings Friday, delivering another round of solid results, even as the stock pulled back.

Appian's recent rally hasn't come without skepticism. A number of analysts are still expecting a pullback from here and have called the stock "detached from fundamentals." Indeed, the price-to-sales ratio is now close to 50, making it expensive even by cloud-stock standards, and the company is still unprofitable. However, the market seems to be recognizing the long-term opportunity in low-code software, and management underscored a few of Appian's advantages on the earnings call. 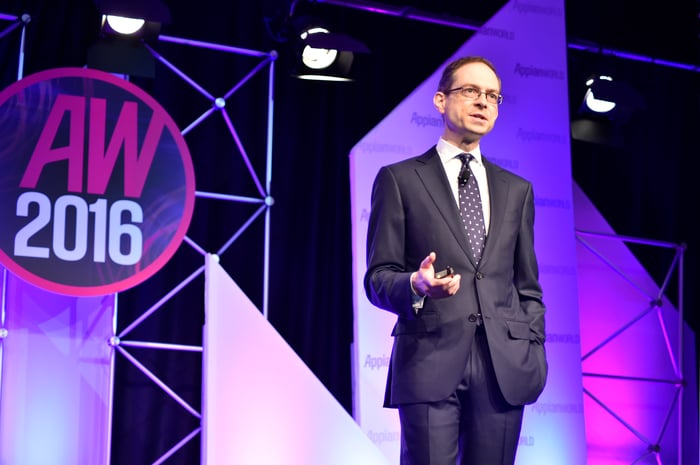 Low-code software, which helps enterprises quickly deploy new applications without the kind of coding normally needed to write software programs, sounds like a tool that may be best used for less sophisticated applications, but that isn't the case. On the earnings call, CEO Matt Calkins said, "Low-code is frequently and increasingly used for mission critical applications," and added, "IT developers need 10x productivity gains just as much as citizen developers do."

Calkins also saw the company's ability to handle mission-critical work as a differentiator from its competitors, saying that the company plays at the "top of the low-code pyramid." In an interview, Calkins added: "Different vendors are going to take different approaches and I think the vast majority of those vendors are going to be contesting the bottom of the pyramid. Very few have the technology and the credibility to contest the top of the pyramid."

Appian's technology and reputation as a low-code pioneer give it an advantage here, and serving companies building mission-critical apps is going to be of higher value and more profitable than those focused on the "bottom of the pyramid," as Calkins puts it.

In a previous interview, Calkins characterized the company's addressable market as $30 billion and growing, but the stock has surged as the potential market for low-code, a large-scale disruptive technology, is expanding.

Calkins said: "Low-code could become ubiquitous. It could just be that a decade from now people expect to communicate with machines by drawing a flowchart, or controlling with drag-and-drop means instead of writing instructions."

It's worth remembering that the $30 billion addressable market in and of itself represents a huge opportunity for Appian as the company just finished a year with $304.6 million in total revenue and $129.2 million from cloud subscriptions. Based on that math, Appian could grow its revenue 100 times based on today's market, but if low-code does become ubiquitous, that opportunity becomes much larger, which helps explain the stock's recent gains and lofty valuation.

Appian's long-term target of 30% growth may not be enough to please some analysts based on the stock's current valuation, but it helps to consider the stickiness of its product. Net retention rate increased 119% in its most recent quarter, showing that existing cloud customers spent 19% more with Appian than in the quarter a year ago, and 81% of its highest-value customers increased their spending on the platform. Most importantly, Appian had a gross renewal rate at the end of the year of 99%, up from 96% a year ago, indicating it experienced almost no churn, even during a year when a number of businesses cut back on their spending because of the pandemic.

On the call, Calkins said, "I feel great about the value we're delivering and the reception we're getting from our customers today and I believe that there's no better predictor for expansion than customer satisfaction." Indeed, that strong renewal rate shows the value of Appian's software and should serve as foundation for its future growth.

The valuation debate isn't likely to end after just one earnings report, and based on the company's revenue growth guidance of 16% to 17% for the year and 30% to 31% in cloud subscriptions, it's likely to face more skepticism. However, there's a huge market opportunity in front of the company. The COVID-19 pandemic has accelerated it, and the stock is benefiting from the broadening awareness of low-code.

Like much of the cloud sector, which has seen valuations inflate over the last year, Appian stock is vulnerable to a pullback, but the long-term appeal of a leader in a technology that could one day be "ubiquitous" is evident, even if it may take several years for it to get there.