We all know money is power. And women won't be equal with men until we are financially equal with men. Getting more money into the hands of women is good for women, but it's also good for their families, for the economy, and for society. -- Sallie Krawcheck, co-founder/CEO Ellevest, former Bank of America executive

Each of us, men and women alike, need to be financially literate and financially confident so that we can manage our finances well. That entails living below our means, paying bills on time, and saving and investing to meet financial goals such as down payments on homes, college expenses, and retirement. 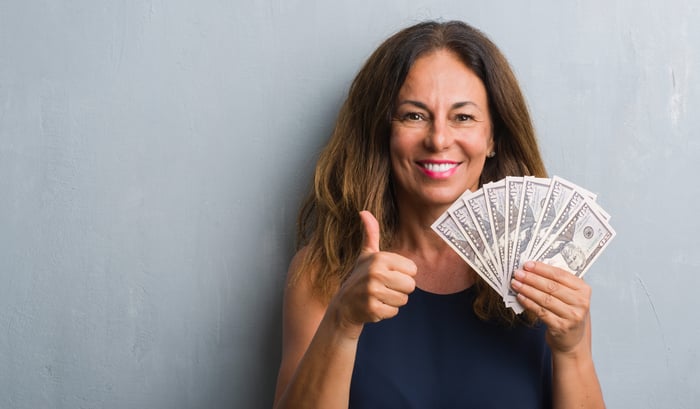 Part of the problem is that women are less confident than men when it comes to money. Here are three reasons they shouldn't be.

No. 1: Women are often short-changed financially

Women need financial confidence to tackle their finances more aggressively and build more security for themselves and their families. The sad news is that in many ways, the deck is stacked against women, financially. As of last year, for example, women earned an average of $0.81 for every dollar that men earn -- and Black, Hispanic, and Native American women earn even less. A bit of good news is that when you compare men and women in the same job with the same qualifications, that wage gap shrinks, with women earning $0.98 for every $1 men earn. But many women hold lower positions than men.

There's more: For every 100 men who get promoted or hired to a manager-level job, only 72 women are, according to the 2019 Women in the Workplace report by McKinsey.

Another headwind many women face is that they often work less than men. They may spend some years out of the official workforce and in the unofficial one, caring for young children at home, or caring for aging parents or others. When you combine lower earnings over fewer years working, it's clearly harder for women to save and invest significant sums for retirement and other goals.

No. 2: Women live longer and will need more money

Women having a harder time saving for retirement is a big problem -- in large part because they live longer, in general. The recent life expectancy at birth for women was 80.5 years, versus only 75.1 years for men, according to the National Center for Health Statistics.

So on average, a woman can expect to outlive her husband by more than five years. During that period, she will be collecting just one Social Security check instead of the two that used to come to the household. That's a huge hit to the household income.

Single women can end up even worse off, because a widow can collect either her own or her husband's Social Security benefit, whichever is larger. But single women only have their own benefits, which may be on the small side since they are likely to have worked less and earned less than men. Benefit amounts are based on how much you earn and how long you work.

The best way to protect yourself against financial struggles in retirement is to save aggressively and invest effectively while you're still working in order to have a nest egg that can support you in addition to Social Security. Amassing a big nest egg can be easier said than done, though. And a planned retirement age of 65 means that the money you save has to support you, on average, for 10.1 years if you're a man and 15.5 years if you're a woman. Of course, you shouldn't plan on an average-length life -- many people these days make it to 90 or beyond. In that case, you'd be needing to support yourself for 25 or more years.

No. 3: A lack of confidence is unwarranted

Here's some good news: If you're a woman, there's little reason to lack confidence about money matters and investing. Consider:

Clearly, there are lots of reasons why women need to be more confident investors. Perhaps the best one is this: They might amass a lot of money, giving themselves a more comfortable future. Look what might be accomplished over time by just sticking with a market-matching index fund:

Take some first steps now to be a more active investor. Start by reading one of the books mentioned above, and then see where it'll take you on your path toward financial independence.