Please ensure Javascript is enabled for purposes of website accessibility
Log In Help Join The Motley Fool
Free Article Join Over 1 Million Premium Members And Get More In-Depth Stock Guidance and Research
By Timothy Green - Feb 26, 2021 at 6:01AM

This safe investment will grow in value over years and decades.

The U.S. government has already sent two rounds of direct stimulus checks to most Americans in response to the COVID-19 pandemic, and it appears likely that a third round will be on its way soon. President Biden's $1.9 trillion stimulus plan, which includes $1,400 direct payments per person subject to income limits, could become law as soon as early March.

This stimulus cash should first be used for necessary expenses or for building up an emergency fund. You should never invest money you can't afford to lose. Get your house in order before even thinking about putting your stimulus check into the stock market.

If you decide to invest your stimulus payment, putting the money into an index fund is a good option. While the stock market plunges from time to time, index investing pays off over the span of decades as long as you avoid panicking when prices drop.

Another option is to invest the money in individual stocks. This strategy is riskier, since you can lose a big chunk of your investment if you make the wrong choice, even if the stock market rises. But investing in individual stocks can potentially lead to market-beating performance. 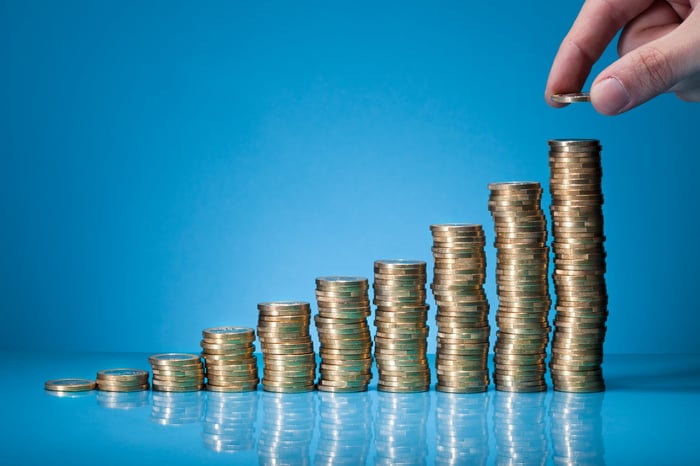 The stock market has soared over the past year, and many of the most popular stocks are now historically expensive. A stock's performance over the long run depends on how quickly the company can grow its profits, but it also depends on the price you pay. A company can do well, but its stock might fall off a cliff if the price starts out too high.

Of course, if you're looking to speculate with your stimulus cash and accept the chance of losing it all, you have a lot of options. But if you want to make a relatively safe investment that could still beat an index fund over the long run, the best stock for your stimulus check is Berkshire Hathaway (BRK.B -1.63%)(BRK.A -1.32%).

Warren Buffett is one of history's greatest investors. Buffett has built up Berkshire Hathaway, which started as a textile manufacturer, into one of the world's largest companies over more than 50 years. The Berkshire of today consists of a collection of top-tier subsidiaries as well as a sizable stock portfolio.

While Berkshire's stock price has had its ups and downs, the stock has handily outperformed the market over the long run. From 1965 through 2019, Berkshire stock has produced a compound annual return of 20.3%. That compares to just 10% for the S&P 500, including dividends.

Buffett also uses Berkshire's cash to invest in stocks. Berkshire owns large stakes in leading companies like American Express, Apple, Bank of America, and Coca-Cola, along with smaller stakes in a few dozen other companies.

Berkshire is now worth nearly $600 billion, so maintaining its historical growth rate will be tough due to its sheer size. But Berkshire's greatest asset, more valuable than its massive stock portfolio, is its optionality. Berkshire maintains a fortress balance sheet with over $120 billion of cash and U.S. Treasury Bills. This cash allows Buffett to make big deals when the market is thrown into crisis. During the Financial Crisis, for example, Buffett poured billions of dollars into Bank of America and Goldman Sachs, eventually reaping a hefty profit for Berkshire.

"Be fearful when others are greedy, and be greedy when others are fearful" is the mantra by which Buffett runs Berkshire. This can lead Berkshire to underperform during times of excess, since Buffett won't jump into a bad deal for the sake of taking action. But over the long run, through many market cycles, Berkshire has come out on top thanks to Buffett's patience and restraint during times of greed, and his willingness to make big bets during times of fear.

Buffett is now 90 years old, and Berkshire won't be in his hands forever. But as long as his successors stick to the core principles that have led to Berkshire's success, the company should make for a fine long-term investment.