Please ensure Javascript is enabled for purposes of website accessibility
Log In Help Join The Motley Fool
Free Article Join Over 1 Million Premium Members And Get More In-Depth Stock Guidance and Research
By Courtney Carlsen - Mar 3, 2021 at 6:35AM

The enterprise says complacency regarding inflation pressures could pose a significant risk to interest rates and the broader economy.

In January, Fannie Mae (FNMA -1.18%) released its latest economic and housing outlook, where it provided its forecast for the housing market and broader economy in the coming years. In that report, the enterprise expressed concern about the potential inflationary pressures we could see soon, along with the related effects they could have on interest rates. Inflationary concerns have been on investors' minds for a decade now, but current concerns are due to the massive amounts of stimulus injected into the economy as part of efforts to combat the COVID-19 pandemic. Here's what Fannie Mae has to say about the matter.

Fannie Mae forecasts a pickup in inflation beginning in the fourth quarter of 2021, continuing into 2022. Its primary concern is that we developed a sense of complacency regarding inflation because we haven't seen many warning signs since the financial crisis in 2008.

Last year, the Fed announced that it will let inflation "run hot" -- meaning it will let inflation go above its 2% target, and that it will tighten monetary policy, or raise its target interest rates, when needed. However, Fannie Mae isn't entirely comfortable with this guidance, saying "their guidance is insufficient to generate a high degree of confidence regarding how they will achieve this goal." Concerns about inflation have also been shared by former Treasury Secretary Larry Summers and former International Monetary Fund Chief Economist Olivier Blanchard. 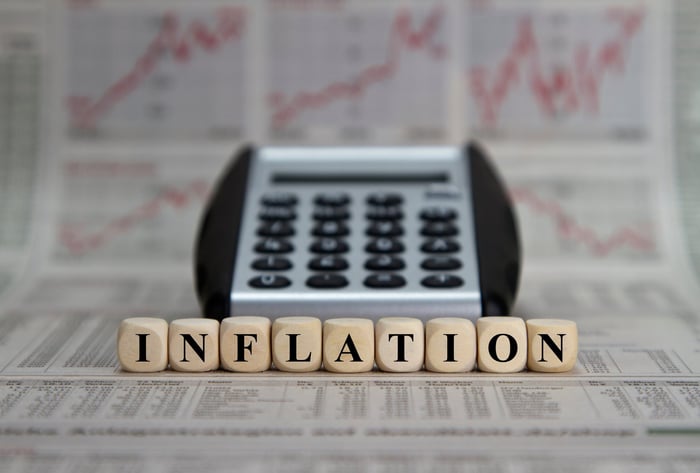 The reason why inflationary risks are higher now than in the past is due to the Fed's monetary policy measures, done in conjunction with unprecedented levels of expansionary fiscal policy. As a result of these policies, household checking accounts grew by $700 billion last year between the first quarter and third quarter, and the personal saving rate grew by 13% in December, twice the level it was before the pandemic.

Economists at Fannie Mae are concerned that production capacity could become constrained due to a restructuring of the economy and an alteration of supply chains. The spike of inflation would come when the labor market recovers and consumer spending is unleashed, pushing demand at a time when production capacity may not be ready for it.

With inflation increasing into 2022, Fannie Mae sees a drop in purchase mortgage originations growth to just 1% year over year as slower sales could reduce volumes. Fannie Mae still forecasts an elevated level of refinancing volumes in 2022, but it is expected to decline to $1.4 trillion from its $2.2 trillion projected in 2021.

A primary concern for Fannie Mae is how interest rates react in relation to inflation expectations. Its economists have noted that market-based measures of inflation expectations have trended up, with the five-year breakeven rate around 2.09% at the time of its report in mid-January, which is at 2.38% as of Thursday.

According to its economists, a meaningful rise in interest rates would "likely dampen economic, housing, and mortgage activity" and a sharp spike in interest rates "could cause an equity market sell-off and restrain home sales and prices, as low mortgage rates have been necessary to maintain affordability over this past year."

Concerns are overblown, per UBS

According to Mark Haefele, chief investment officer at UBS, "While we think inflation may spike in the near term as pent-up demand meets constrained supply, we believe fears about a persistent rise are likely to prove overdone." While these inflationary concerns could cause near-term market volatility, UBS recommends investors stay the course and go into cyclical stocks -- which benefit when the broader economy improves -- including sectors like financials, energy, industrials, consumer discretionary, and healthcare.

There are a few things you can do to protect your money against higher inflation, including checking your emergency fund and simply staying invested. However, nobody can know for sure when or even if we will see an uptick in inflation in the months ahead. As an investor, it helps to be aware of the current economic backdrop, but more importantly, to stay the course with a long-term investment perspective in mind.