In April 2020, the U.S. unemployment rate hit 14.8%, according to the U.S. Bureau of Labor Statistics. In other words, roughly 1-in-7 people looking for a job couldn't find one. That high rate, not seen since the Great Depression years, has fallen somewhat over the past nine months, but it still sits at a relatively elevated 6.3% as of January 2021.

Not surprisingly, Paycom Software (NYSE:PAYC) -- a provider of human capital management (HCM) solutions like payroll software -- had a rough year as a result of this elevated jobless rate. Revenue growth decelerated substantially, and the company's net income dropped 21% year over year in 2020.

The good news in this otherwise gloomy list of facts is that these are very likely just temporary headwinds. Paycom stock is still a buy and here are three reasons why. 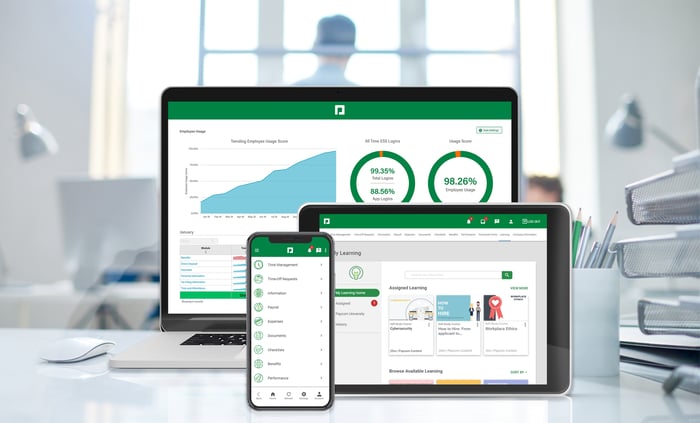 According to Paycom's management, the majority of operating companies use either a patchwork of cloud-based solutions or legacy on-premise software for their HCM requirements. But using multiple products can make payroll services unnecessarily complicated since it means human resources (HR) departments will have to manage employee information in multiple locations. Likewise, on-premise software can become outdated quickly, it often requires a large up-front investment, and it is more difficult to scale than cloud-based solutions.

As evidence of the company's ability to create value for clients, Paycom's retention rate was 93% in 2020. That would be a solid number under any circumstance, but it's even more impressive given the pandemic-driven surge in business closures and unemployment.

Despite competition from larger enterprises like Automatic Data Processing (NASDAQ:ADP) and Workday (NASDAQ:WDAY), Paycom has posted strong revenue growth in recent years. In fact, since 2017 the company has grown its top line more quickly than either of these rivals. 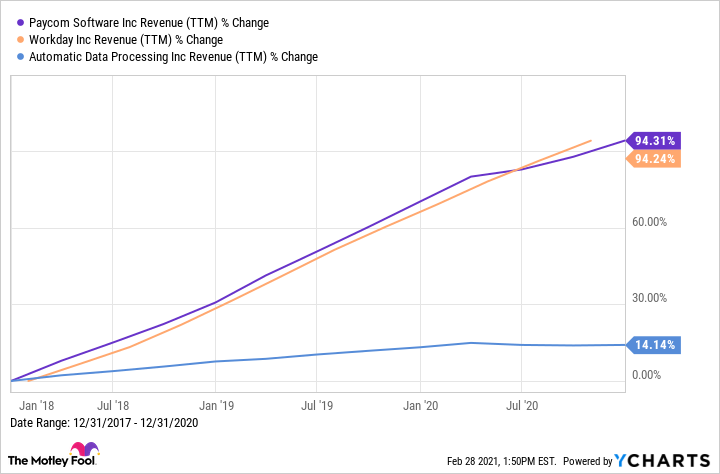 While ADP and Workday both have a greater market presence, Paycom's faster revenue growth suggests the company is gaining ground. That's encouraging.

To press this advantage, Paycom continued to spend heavily on research and marketing through the pandemic. The short-term consequence of that decision was a significant decline in the company's operating margin from 31% in 2019 to 22% in 2020. However, Paycom management believes this strategy will ultimately drive growth and further market share gains in the years ahead.

To keep tabs on this situation, investors should look for Paycom's revenue growth to reaccelerate and its operating margin to expand as the unemployment rate falls.

Paycom's software-as-a-service (SaaS) business model comes with several advantages. For example, by delivering its software through the cloud, Paycom has been able to achieve a gross margin in the mid-80% range. That figure is impressive, even for a SaaS business.

By comparison, Workday's gross margin was 72% and ADP's was 42% over the trailing 12 months. That suggests Paycom could be more profitable than both of its competitors.

Additionally, Paycom's SaaS business model means it can scale quickly. Rather than needing to partner with retailers and build extensive distribution networks, the company can deliver its software almost instantly to any connected geography. That flexibility allows Paycom to add and support new customers quickly without incurring heavy costs.

Investors should bear in mind that the HCM market is highly competitive. Workday in particular is a formidable foe, given the company's market share and strong sales growth.

That said, the market is big enough to support multiple long-term winners. And Paycom has several key advantages: The company is growing revenue more quickly, has significantly less debt on its balance sheet, and operates at a much higher gross margin than Workday. That's why this software company looks like a good long-term investment.