Please ensure Javascript is enabled for purposes of website accessibility
Log In Help Join The Motley Fool
Free Article Join Over 1 Million Premium Members And Get More In-Depth Stock Guidance and Research
By David Jagielski - Mar 6, 2021 at 6:10AM

This could be a huge month for the company.

Sundial Growers (SNDL -1.99%) has been one of the hottest pot stocks of 2021. With a valuation of $2.03 billion, it is up 174% since the start of January (the Horizons Marijuana Life Sciences ETF is up 61% during that same time) as of March 3. But the gains have been largely due to speculation, as the company hasn't released any financial results or announced a significant transaction with another pot sector player.

However, in March, the company is going to release its year-end results, which could be a catalyst for even more speculation and trading activity. Could now be a good time to buy the stock, or is it too risky given that a new earnings report is just weeks away? 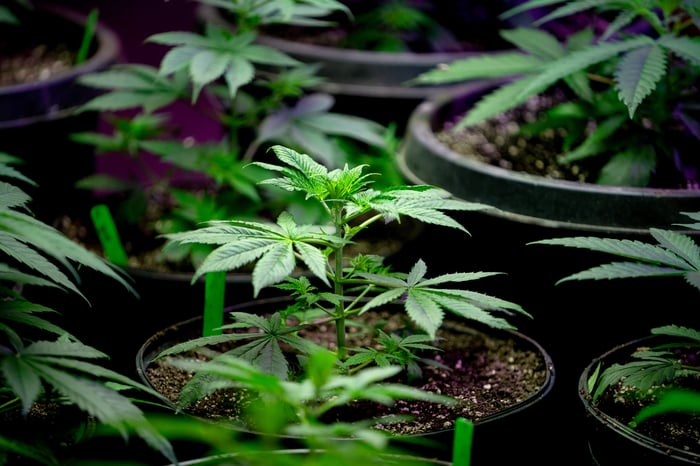 Why the earnings report will be crucial

Sundial Growers announced Tuesday that it will release its fourth-quarter results on March 17 (after the markets close) for the period ending Dec. 31, 2020. Investors will want to circle that day, set alarms, and do whatever they need to do to make sure they don't miss it the release. For an ordinary company, investors would be looking to see how the business has been doing, whether its sales are growing, and how strong its financials as a whole are.

But this isn't your typical company or stock.

A big part of the reason Sundial has been skyrocketing in recent months is because investors are expecting some sort of a deal. Whether the company is the buyer or seller is irrelevant; a merger or acquisition situation can instantly send shares of a stock soaring if an acquirer pays a large premium for it or if the company itself lands a great business at a cheap price.

If investors were concerned about sales or profits, they likely wouldn't have been investing in Sundial in the first place. The company hasn't reported earnings since Nov. 11, 2020, when its third-quarter numbers were released. At that time, net revenue of 12.9 million Canadian dollars for the period ending Sept. 30, 2020, was down a whopping 54% from the prior-year period. The company blamed the drop on its transition from wholesale to its focus on branded retail sales. Whether the move pays off is uncertain, but with operating losses of CA$110 million over the trailing 12 months, the company needs more than just a modest boost to its top line to get anywhere near profitability.

While some investors may be anticipating (or hoping for) a turnaround, my guess is that they will be looking for some sort of news in Q4 on the "strategic alternatives review" that Sundial's management said it was working on in Q3.

News of a deal in sight could ramp up speculation on the stock and send it into the stratosphere. But if there isn't news on that front and Sundial delivers lackluster results, it could have the opposite effect on the pot stock's shares. Whatever results or developments come out March 17, expect them to move this very volatile stock in a big way.

Should you buy the stock before or after earnings?

Sundial's stock can be unpredictable, which makes it especially dangerous to buy right now and hold into earnings. Sure, you could make a fortune if things go well and it doubles in value on a great report or news that a transaction is in the works. But you also run the risk that the share price crashes if management says there isn't a deal and its financials remain uninspiring. If you were to buy shares of Sundial, the time to do so would be after it reports earnings. Investors will then have a clearer picture of what the business might look like under its new retail-focused strategy.

There are some great reasons to be bullish on the stock -- including its new cash on hand in a cash-strapped industry. After its last two offerings, Sundial has more than CA$600 million in cash on hand. That's enough money to buy Auxly Cannabis Group, which has a valuation of just CA$264 million and claims to be in the top spot in the cannabis 2.0 market (edibles, vapes, etc.) in Canada. I'm not saying that will happen, but it's an example of the kind of potential Sundial has by just possessing that amount of money.

But until there is some clarity surrounding its future, Sundial remains a stock I would keep on a watchlist rather than buy. It isn't a stock that looks like a great investment right now, but after March 17, that could change.