Please ensure Javascript is enabled for purposes of website accessibility
Log In Help Join The Motley Fool
Free Article Join Over 1 Million Premium Members And Get More In-Depth Stock Guidance and Research
By Billy Duberstein - Updated Mar 7, 2021 at 9:57AM

Is this finally the banks' time to shine?

Shares of Bank of America (BAC -3.08%), US Bancorp (USB -1.11%), and Synovus Financial (SNV -2.57%) rose 17.1%, 16.7%, and 13.7%, respectively, in February, according to data provided by S&P Global Market Intelligence. All three banks had released their fourth-quarter reports in late January, and there wasn't much company-specific news during February. The big monthly move was therefore largely due to the same macroeconomic factors.

The gains were no less intriguing, however, and if the economic picture continues to improve along the same lines, more gains could be ahead for these rock-solid bank stocks. 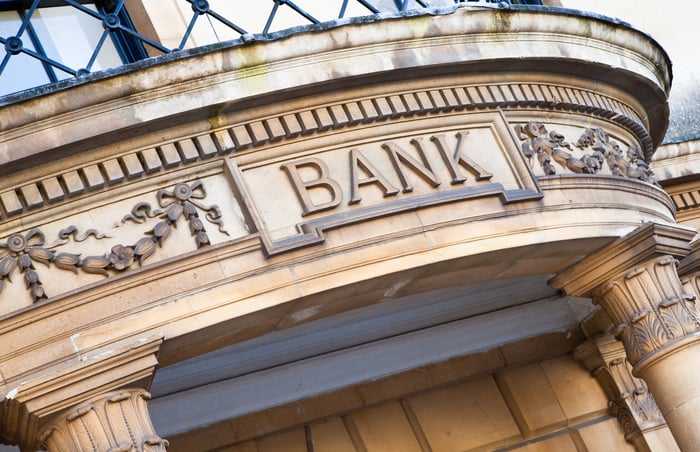 The common thread among these three banks is their dependence on interest rates and the yield curve. While the biggest U.S. banks are largely diversified among lending, investment banking, sales and trading, and wealth management, Bank of America is perhaps the most sensitive to straight-up lending among the four largest U.S. banks.

Still, a large part of each of these banks' revenue comes from loans and fee-based revenue linked to spending on things like credit cards and debit cards, making them sensitive to overall economic conditions. And the economic outlook for the U.S. improved greatly throughout February.

Most notably, it appears the economy is headed toward a faster reopening than previously thought. The Biden Administration is ahead of its goals to administer 100 million vaccine doses in its first 100 days; in fact, after the recent approval of the Johnson & Johnson (JNJ -1.86%) vaccine, the administration has moved the timetable for vaccinating all Americans to the end of May, from the original target date at the end of July.

In addition, it appears Congress is on track to pass the $1.9 trillion American Rescue Plan, which will inject much-needed stimulus into the economy while it's still partly shut down, and should ensure a speedier recovery once things reopen.

A faster reopening with more government stimulus has recently led to an increase in long-term bond rates, a benchmark against which many banks peg their loan rates. Yet at the same time, the Federal Reserve has pledged to keep short-term interest rates at zero for the foreseeable future, until the economy is back to full employment and inflation gets back to its 2% goal.

Since banks "borrow short term" and "lend long term," a steeper yield curve should lead to expanded net interest margins for lenders. Given the loan-heavy makeup of all three banks, it's no wonder that these three stocks rose in February.

There are also reasons to think that the recent moves upward in these bank stocks could continue.

First, thanks to fiscal stimulus and increased unemployment benefits passed throughout 2020, bank loans have held up largely better than many had thought at the beginning of the pandemic. In response, the Federal Reserve announced in late December that it would begin allowing banks to repurchase their shares once again, should the banks meet certain benchmarks for soundness. More share repurchases should help boost bank earnings, as share repurchases increase per-share earnings going forward, given the same amount of net earnings.

Second, banks are generally value stocks that trade at lower earnings multiples compared with much of the market. Rising long-term interest rates also mean investors will have to discount future earnings more than they did when long-term rates were lower. That means investors may gravitate more toward cheaper stocks that make more profits today, but may have lower growth, relative to the high-growth but unprofitable tech stocks that dominated 2020. In fact, we've already seen this shift begin in recent weeks: 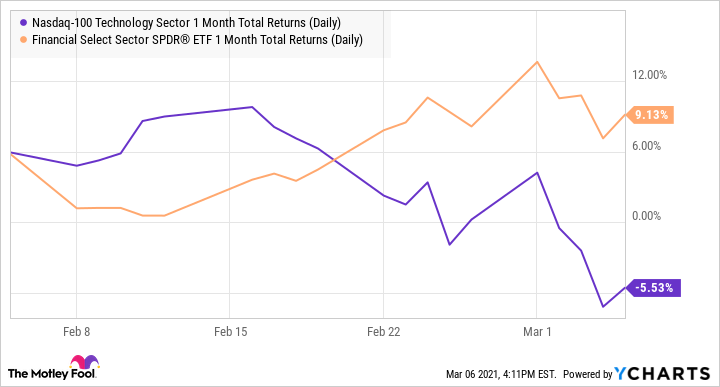 Despite their recent moves, it's quite possible bank stocks will continue to outperform in 2021 as the economy gets back to normal. For loan-heavy, economically sensitive banks, the economic reopening combined with fiscal stimulus is a recipe for continued gains in 2021.