Why Planet Fitness is a better long-term investment.

AMC Entertainment Holdings (AMC -10.32%) shares are spiking again this week, with the rise seemingly divorced from the theater chain's underlying fundamentals. AMC has been able to recently raise more equity to weather the financial storm its facing, but that comes with significant dilution and should not be taken as an all-clear signal for investors.

Let's explore why AMC stock should really be avoided these days and why another recovery stock -- Planet Fitness (PLNT -5.07%) -- should be considered instead.

The pandemic has been daunting for AMC -- through no real fault of the management team. Not only did COVID-19 containment efforts force most of its locations to shut down or restrict capacity, but the pandemic also emboldened content creators to seek alternative release options and cut AMC out of the entertainment equation. 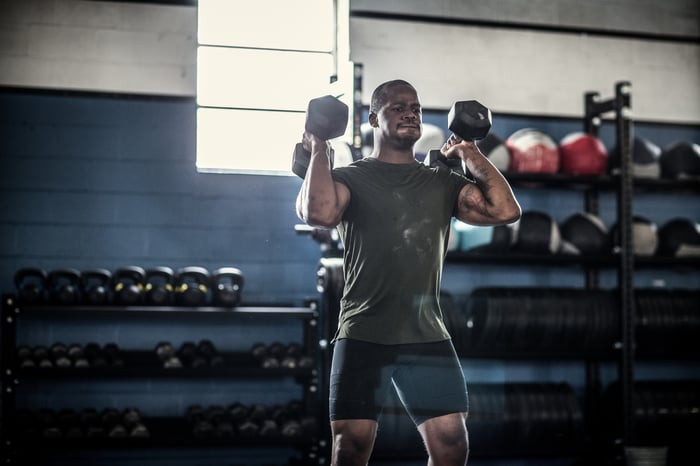 AT&T's WarnerMedia is co-releasing its 2021 film slate in theaters and also on its HBO Max streaming product. Walt Disney's various studios have been releasing various productions, including the hit movie Soul, to its Disney+ streaming service with some success, and Netflix is committed to releasing at least one in-house produced studio-level film every single week for 2021.

AMC relies on outside creators like these studios and others to distribute new films to its theaters on an exclusive basis before releasing them as DVDs, to cable, or to streaming services. AMC's reliance on this business model is growing more and more precarious as a result. In this scenario, those passionate about seeing new content on the big screen will likely continue to go to theaters. But there's no guarantee that the general public still will.

And despite this significant problem, AMC's share prices are soaring anyway. 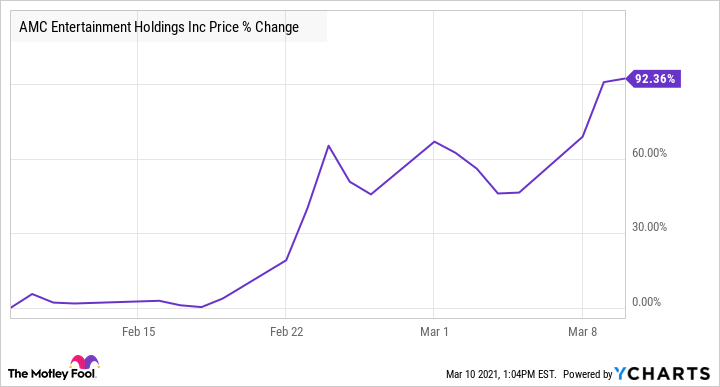 Why Planet Fitness is better positioned to succeed

In contrast, Planet Fitness doesn't rely on outside companies for its own success and it's much more self-sufficient. Planet Fitness offers consumers access to equipment and personal training for the industry-low cost of $10 per month. This creates a compelling value proposition that is not easily copied or made outdated by technology organizations.

Sure, Peloton Interactive can build out its at-home fitness offering and Amazon can sell other home-based fitness products. But building an in-home gym that offers what Planet Fitness can offer is exponentially more expensive, and it takes up more space than most fitness enthusiasts have available.

This stable niche business model perhaps explains how Planet Fitness actually gained market share on the back end of the last financial crisis just over a decade ago. It also explains why Planet Fitness management believes it will do the same this time as well.

Planet Fitness is seeing encouraging signs of an early recovery

As of today, 90% of Planet Fitness locations have reopened following temporary shutdowns related to the pandemic. The national chain managed to avoid any permanent location closures or bankruptcies and has already restarted its national marketing campaign. It's even boosting its marketing campaign amid strong demand.

Encouragingly, Planet Fitness returned to positive month-over-month membership growth in January this year for the first time since COVID-19 began. While it was not a large spike, memberships rose 2.2% to 13.8 million, an encouraging sign nonetheless.

The company's 47.3% month-over-month jump in new memberships in January comfortably beat other chains like LA Fitness and 24 Hour Fitness. That suggests it is gaining market share.

The company is even starting to win in digital. Its new Planet Fitness mobile app is among the top three being downloaded in the fitness category among both Apple and Android users. Roughly 70% of new members are using the app. There is steep competition in this category from the likes of Peloton and now Apple, but Planet Fitness is finding real success in this omnichannel pursuit.

The national gym chain is even testing a paid digital subscription for $5.99 per month and management says it remain encouraged by the trends it is seeing. Planet Fitness can use the draw and attraction of its popular brick-and-mortar assets to build out a more successful multi-channel ecosystem; AMC has an app as well, but hasn't been able to put it to much use over the past year.

Planet Fitness is the way to go

As an investor, chasing AMC's parabolic stock price rise can be tempting, but it's just not a good idea. Planet Fitness, in contrast, has the assets in place to deliver now while also forecasting much brighter days for shareholders in the future. That is where I would consider investing in a recovery.