Please ensure Javascript is enabled for purposes of website accessibility
Log In Help Join The Motley Fool
Free Article Join Over 1 Million Premium Members And Get More In-Depth Stock Guidance and Research
By Rick Munarriz - Mar 10, 2021 at 10:25AM

Remy's Ratatouille Adventure won't open until October, more than four years after it was unveiled.

You're going to have to wait for a rat infestation at Walt Disney's (DIS -0.70%) Epcot theme park in Florida. Disney World announced on Tuesday that the Ratatouille-themed ride that was initially slated to open last summer will wait until Oct. 1 to make its official debut.

The timing makes sense from a strategic perspective. The entire resort turns 50 that day, and it's when the world's leading theme park operator will begin an 18-month celebration of the beefy milestone. There will naturally be a flurry of activity at the resort's original Magic Kingdom, which opened on that day 50 years ago. Staging a grand opening of a new ride at Disney World's second park will help send some potential visitors to a different gated attraction.

Pushing out the ride's debut to what is essentially the start of Disney's fiscal 2022 makes sense for other reasons, too. Theme park fans expecting an earlier taste of Remy's Ratatouille Adventure may not be happy about having to wait until October, but it's a smart move. 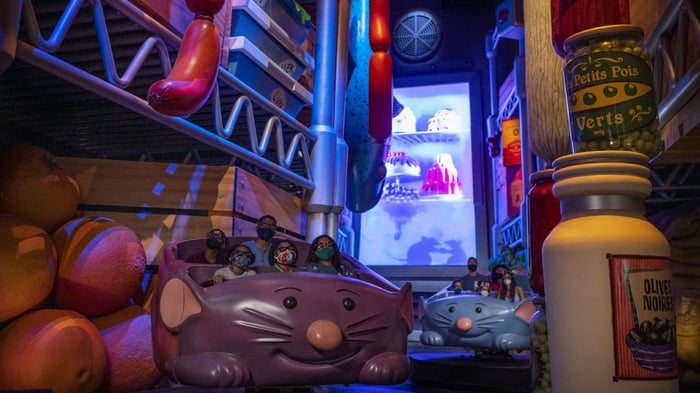 Too many rat chefs in the kitchen

It was four summers ago that Disney World wowed theme park enthusiasts with a flurry of new ride announcements in anticipation of the resort turning 50. The key pieces that were unrolled were a Guardians of the Galaxy-themed "story" coaster for Epcot and a Tron-fueled cycle coaster for the Magic Kingdom, but Remy's Ratatouille Adventure was another popular planned addition.

Remy's Ratatouille Adventure was widely expected to be one of the earliest attractions to open ahead of the celebration. Epcot was the park that needed the most attention, and the ride would slide in perfectly in the France pavilion of its World Showcase. The trackless attraction where guests board mouse-themed vehicles and travel through larger-than-life scenes inspired by the original Pixar film had opened in Disneyland Paris in the summer of 2014. In short, the blueprint and ride technology were essentially drawn up and battle-tested already.

By 2019, banners were up around the ride's construction site promoting a summer 2020 opening. We obviously know what happened last year. The pandemic shut Disney World, but the Florida parks were only closed for four months. The attraction should've been just about ready to go before the global COVID-19 crisis became a stateside reality.

There's still a method to the mouse-ness of an October premiere. Remy's Ratatouille Adventure could've probably opened last year or at the very least earlier this year. But the reality here is that Disney and its theme park peers are capping attendance to keep crowds manageable in satisfying social-distancing standards. Disney World is currently limiting in-park guest counts to just 35% of official capacities, and it's not having a problem filling the available admission slots. Why waste a new opening at a time when a park's already entertaining as many people as it feasibly can?

It's not just Disney playing this game. SeaWorld Entertainment (SEAS -2.27%) had major new coasters going up in all of its regional theme parks for 2020. Shortly after the pandemic hit, SeaWorld bumped all of its new thrill ride debuts to 2021.

It should be a whole new world by October for Disney World. President Joe Biden expects enough COVID-tackling vaccines being produced to cover all adults in this country by the end of May. So by this summer, there could be some degree of normalcy to a day at a theme park. But if not, the fall is a safer bet for Disney easing up on capacity limits and possibly even mask and social-distancing requirements. It will also only help that travel restrictions have a better shot at being eased by then, and that we will have clawed our way out of the recession that started early last year.