Please ensure Javascript is enabled for purposes of website accessibility
Log In Help Join The Motley Fool
Free Article Join Over 1 Million Premium Members And Get More In-Depth Stock Guidance and Research
By Keith Speights - Mar 11, 2021 at 6:08AM

They'll make you more money if you sit tight.

It's tempting to zip in and out of stocks to try to make fast money. That's especially the case with many of the super-volatile stocks that are popular among Robinhood investors. However, attempting to time the market through frequent trading is often a way to lose money in a hurry.

There's a better strategy that's more likely to generate great returns over the long term: Find well-run companies that have tremendous growth prospects, buy their stocks, and then sit back and wait. Here are three Robinhood stocks that smart investors will particularly want to buy and hold for years. 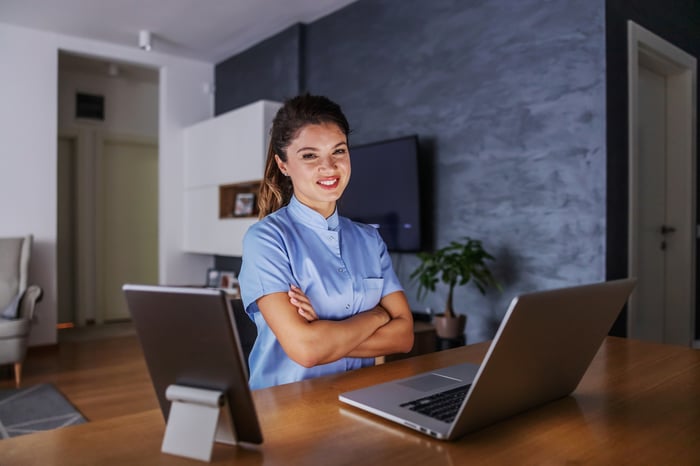 Amazon.com (AMZN 0.25%) ranks as the third-largest company in the world based on market cap. Don't think for a second, though, that the internet giant doesn't have massive growth opportunities.

The primary growth driver for Amazon in recent years has been its AWS (Amazon Web Services) cloud hosting platform. Look for AWS to continue fueling increased revenue and profits for the company for a long time to come, especially as artificial intelligence (AI) becomes embedded in most software applications.

Amazon's core e-commerce business will also almost certainly grow tremendously over the next decade and beyond. One often overlooked source of growth is advertising. Amazon already ranks as the No. 3 advertising platform in the U.S. and should enjoy continued momentum from selling ads throughout its ecosystem.

Then there's Amazon's expansion into new markets. Self-driving robotaxis and home robots represent just the tip of the iceberg. The company's move into healthcare could be its biggest near-term opportunity as Amazon seeks to capture a big chunk of the retail pharmacy market and potentially build a large-scale telehealth business.

PayPal Holdings (PYPL -0.91%) has been a big winner for investors, with the stock tripling over the last three years. But buying and holding the fintech stock for at least five years (10 years would be even better) should make you a lot more money than selling after quick gains.

The company is a leader in the shift from cash to digital payments. PayPal directly benefited from the COVID-19 pandemic as consumers shopped online like never before. However, the pandemic also spurred PayPal to launch QR code functionality that enables customers to pay for products purchased in brick-and-mortar stores with its app. Several major retailers already use PayPal's QR code payments with more on the way.

Paying back friends and acquaintances with cash is quickly going the way of the dinosaurs, thanks in large part to PayPal's Venmo peer-to-peer payment app. Venmo's total payment volume soared 60% year over year in 2020, with its customer base expanding by 32%. This momentum should continue in 2021 and well into the future.

PayPal also has a significant growth opportunity in supporting cryptocurrencies. The company recently announced plans to acquire Israel-based blockchain specialist Curv. With a market cap of a little under $300 billion, PayPal is already a big company. However, the growth in digital payments (including the use of cryptocurrencies) should enable PayPal to grow much larger over the next decade.

Warren Buffett is well known as a buy-and-hold investor. But he recently led Berkshire Hathaway to sell its stake in Pfizer (PFE 3.59%). Just because Buffett sold Pfizer after holding it for a short period doesn't mean it's a smart move for other investors, though.

Actually, the long-term prospects for Pfizer look better than they have in years. The big pharmaceutical company's growth has been held back in the past by older drugs that no longer enjoy patent exclusivity. Pfizer isn't weighed down by those drugs anymore, though, thanks to the merger of its Upjohn unit with Mylan last November.

The company now expects to generate annual adjusted earnings-per-share growth of around 10% -- at least over the next five years. With Pfizer's juicy dividend thrown into the mix, investors should see solid total returns.

It's important to note, however, that Pfizer's earnings-growth projection doesn't include the impact of its COVID-19 vaccine BNT162b2. Pfizer expects the vaccine to rake in well over $18 billion this year. Although the company will split profits equally with its partner BioNTech, Pfizer's fortunes will definitely receive a huge boost from BNT162b2 in 2021 and beyond. Investors who buy and hold this popular Robinhood stock will likely be glad they did down the road.