Please ensure Javascript is enabled for purposes of website accessibility
Log In Help Join The Motley Fool
Free Article Join Over 1 Million Premium Members And Get More In-Depth Stock Guidance and Research
By Alex Carchidi - Mar 12, 2021 at 7:23AM

They sell the tools that the marijuana industry needs.

It's a comedy cliche that smoking marijuana causes paranoia for some people. But if you're a cautious investor, it's completely reasonable to think that cannabis stocks are quite risky. Many of the industry's leaders haven't seen their stock prices grow consistently, and there's more than one story of collapse.

That said, progress toward full marijuana legalization makes me confident that in the long run, the market for cannabis in the U.S. will be much larger than it is today. In fact, according to a report by New Frontier Data, the regulated cannabis market may grow to reach $41 billion by 2025, which is nearly double its estimated size of just over $20 billion in 2020. Until then, investors will probably find that it's safer to buy stocks in companies that sell the products cannabis operators need to make money. Today, I'll be discussing three such competitors -- and they're already selling like gangbusters. 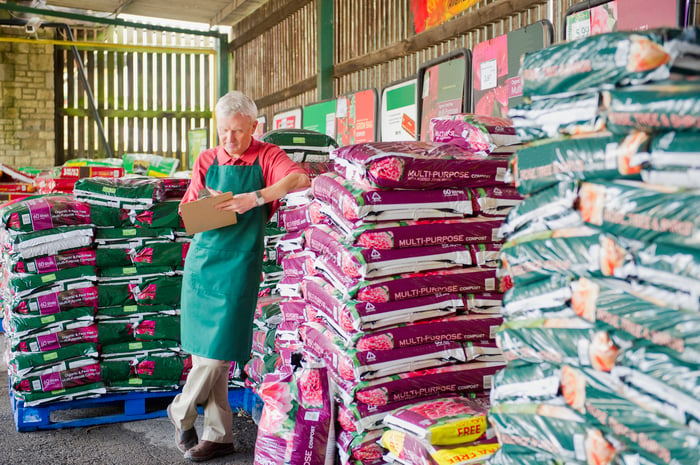 Scotts Miracle-Gro (SMG -0.38%) is a broad-based agronomy company, and nearly every segment within its business supplies something that marijuana companies need during the cultivation process. The company's brands include pest control solutions as well as lawn care products like Miracle-Gro. It also owns a handful of hydroponics equipment brands for consumer and commercial use.

More importantly, its sales volume is rapidly recovering from the impact of the pandemic. Compared to the first quarter of 2020, the company brought in 105% more revenue in the first three months of this year, reaching $748.6 million in total. That's a surprising result, as the winter months are rarely times when gardening gear is in high demand.

Moving forward, investors should expect Scotts to become more and more involved in the cannabis market. Its subsidiary, Hawthorne, launched a joint cannabis cultivation research center early last year. Over time, the center could pave the way for new product offerings or new revenue from issuing licenses for its growing methods. Investing a few thousand dollars in Scotts today will provide investors broad exposure to upside in the marijuana market -- but without the intense downside risk of a dedicated industry supplier with no consumer-facing business.

There's no single landlord for the medicinal cannabis industry, but if there were, it'd be Innovative Industrial Properties (IIPR 0.84%). IIPR buys indoor marijuana farming space and then leases it back to the prior owners, who are typically smaller cannabis companies. Its business is booming as its customers look to raise capital to take advantage of legalization, decriminalization, and medicinal use spreading across the U.S. In its portfolio of 67 cultivation properties, 100% of its floor space is leased, and its average lease length is for more than 16 years. That means its revenue is not only secure from downturns in the industry, but also highly recurring from year to year. Even amid the economic disruption of 2020, its revenue grew by 162% compared to the prior year.

Management is expecting even more demand for growing space in the future, leading the company to buy 13 new properties in the last quarter alone. Once these locations are rented out, they'll be generating revenue for a long time. And, with $126 million in cash, IIPR has plenty of money to expand even further as it sees fit. To sweeten the deal for investors even more, the company has steadily increased its dividend over the past few years. As its revenue and earnings continue to balloon, buying the stock now will ensure that you get the benefit of dividend growth over time, not to mention equity appreciation. 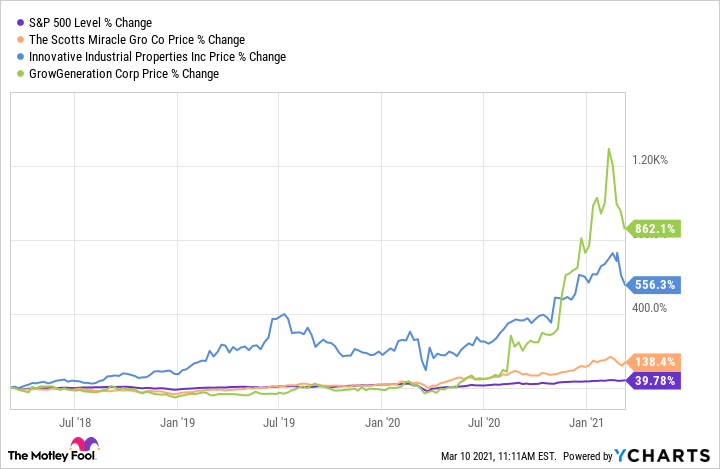 Hydroponics retailer GrowGeneration (GRWG -3.98%) makes the hardware that companies like IIPR buy to outfit their indoor growing spaces. Without using its growing lights, water-circulating systems, and packages of soluble nutrients, marijuana cultivators would need to use open-air growing fields, thereby risking potentially lower yields. Though the company is only thinly profitable, as of late it's on an acquisition spree, buying out local hydroponics companies in Colorado, Oklahoma, and California. With 140% year-over-year revenue growth in 2020 and a predicted doubling of its e-commerce business by the end of this year, it's no surprise that it's making moves to expand.

GrowGeneration's expansion strategy is focused around the cannabis industry, though its products are also useful in many other horticultural contexts. When it looks for areas to enter with an acquisition or opening of a new set of stores, management explicitly targets the regions that have the highest cannabis industry activity, as well as those that are expected to have higher activity in the future. As a result, the company is in a position to make sales as soon as the legislative environment allows the industry to proceed. And, in 2021, that's looking like a larger number of states than ever before, which is quite exciting for its investors.