Please ensure Javascript is enabled for purposes of website accessibility
Log In Help Join The Motley Fool
Free Article Join Over 1 Million Premium Members And Get More In-Depth Stock Guidance and Research
By Rekha Khandelwal - Mar 12, 2021 at 7:24AM

This midstream energy giant can generate steady earnings -- and provide investors with stable income -- even when crude prices are volatile.

West Texas Intermediate crude oil prices have largely been above the $60 per barrel mark since mid-February. Prices rallied further last week after Saudi Arabia announced it would extend its voluntary production cut of 1 million barrels of oil per day through April. Moreover, other OPEC countries have decided to keep their outputs constant through April.

Overall, oil prices tend to rise and fall based on numerous factors that are largely out of individual companies' control. So for investors, it's wise to select oil companies that can remain resilient in the face of short-term fluctuations in crude prices. Enbridge (ENB 2.60%) is one such stock. Here's why I think it's the best oil stock to buy right now. 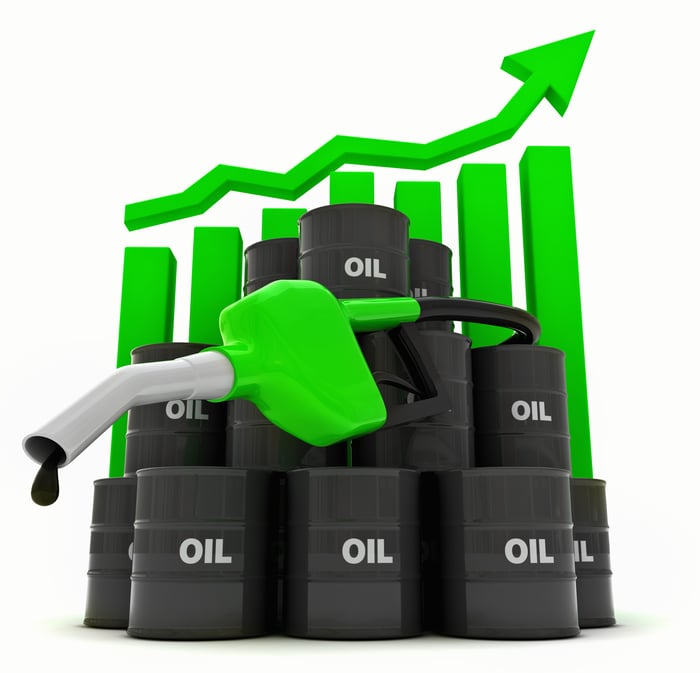 Enbridge's reported earnings last year fell largely due to a non-cash impairment charge of $1.7 billion relating to its investment in DCP Midstream. The company's adjusted EBITDA, however, remained flat year over year. Several factors contribute to the stability of Enbridge's earnings.

Why Enbridge's earnings are resilient

First, Enbridge's natural gas distribution and transmission operations are largely regulated, so the cash flows from them are quite steady. Second, tolls on its key liquids pipeline system -- called the Mainline system -- are governed under a framework agreed to by the company, the Canadian Association of Petroleum Producers, and the shippers. The rates, approved by the Canada Energy Regulator, are agreed to for the long term, providing further stability to Enbridge's earnings.

In addition, the demand for the pipeline's capacity remains robust. That's because it provides much-needed takeaway capacity from Canada's oil sands to refineries along the Gulf Coast, which are best designed to process the heavy and cheap crude that's extracted from those oil sands. Changing to other grades of crude wouldn't be efficient for these refiners. That explains why most of the volumes lost on the Mainline pipeline due to COVID-19 have already returned.

Moreover, getting the required approvals to build a new pipeline from Alberta's oil sands is nothing short of daunting. Plans for big Canadian pipelines have been shelved by companies due to the regulatory and environmental difficulties involved, as well as lower energy prices that made those projects less attractive economically. These include Enbridge's Northern Gateway project, and more recently, TC Energy's Keystone XL project. Kinder Morgan sold its Trans Mountain pipeline and its expansion project to the Canadian government due to ongoing legal battles over the project.

With new pipeline capacity harder to come by, demand for existing takeaway capacity should remain strong for years to come.

Further, Enbridge's transmission assets, as well as a chunk of its remaining assets apart from regulated distribution assets and Mainline pipeline are backed by take-or-pay contracts. Under such contracts, the customer pays a penalty if it doesn't uses the contracted capacity. Only 2% of the company's cash flow is directly exposed to commodity prices.

Enbridge's steady operations have allowed it to raise its dividend for 26 years in a row. At current share prices, that dividend yields around 6.9%. What's more, the company expects to place CA$10 billion of growth projects into service in 2021, which should help fuel further payout growth. The company expects healthy per share annual distributable cash flow (DCF) growth of 5% to 7% through 2023.

It also expects to pay 60% to 70% of its DCF as dividends. Enbridge's debt-to-EBITDA ratio at the end of 2020 was 4.6, within its target range of 4.5 to 5. That means not only are Enbridge's dividends well covered by DCF, but the company also has a strong balance sheet to lean on should earnings fall a bit.