Please ensure Javascript is enabled for purposes of website accessibility
Log In Help Join The Motley Fool
Free Article Join Over 1 Million Premium Members And Get More In-Depth Stock Guidance and Research
By Alex Carchidi - Mar 12, 2021 at 6:10AM

It could be a good growth pick, but it probably won't repeat its recent blastoff.

Timing the market is inadvisable, because it's very hard to do it correctly. But sometimes it's tempting, even for the savviest of investors. Innovative businesses rarely make disruptive moves without telling everyone what they're planning on doing beforehand to build hype -- and that's often the nudge that prods people to buy stock in a hurry. And, as counterintuitive as it may sound, sometimes that's a profitable move, like it might be with the pet health company Zomedica (ZOM 9.56%).

Zomedica is launching its first product later this month, a diagnostic device called Truforma that's intended for use in veterinarian's offices. That's an obvious potential catalyst for growth, but it also constitutes a concentrated risk that investors shouldn't discount. After all, if the company's only product launch is weaker than expected, or a major flaw is revealed once the device is being used in the real world, there won't be anything preventing a free fall in stock price. Let's take a look at the case for buying it now versus the case for waiting or avoiding the stock altogether to get a better understanding of the risks and potential for upside. 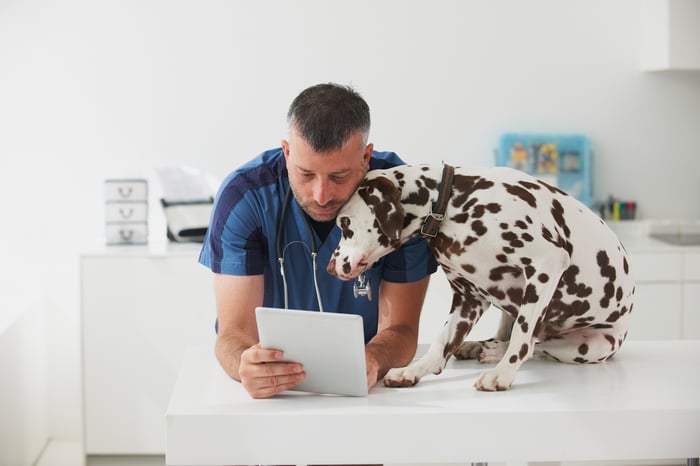 Truforma is a diagnostic platform that can tell vets several key pieces of information about the health of their feline and canine patients. In particular, it can detect a pet's level of cortisol, thyroid stimulating hormone (TSH), and free T4 (thyroxine), depending on which test the practitioner chooses. The system has two main components: the Truforma analyzer machine itself, and the test cassettes that vets load with biological samples from Fido. Then, the vet pops the cassette into the device, and it delivers a readout shortly after.

The true innovation of Truforma lies in the fact that clinics don't need to send their samples off to an outside lab to get results. While it isn't the only product that fills this role, having the diagnostics in-house means that practitioners can make decisions about patient care much faster, which could lead to better outcomes. Plus, there's a chance that cutting laboratories out of the loop could lead to cost savings for animal healthcare offices. In short, the convenience of Truforma is highly appealing, and it could drive substantial revenue growth for Zomedica.

After it launches in March, sales will slowly ramp up through the end of the year. In the meantime, Zomedica will develop and release new tests that are compatible with the machine, expanding its utility to vets. Increasing the device's portfolio of tests is critical, as each new functionality will likely require customers to purchase new consumables on an ongoing basis. In other words, each new diagnostic will increase the potential for recurring revenue, which could stimulate stock growth.

Finally, while Zomedica isn't profitable yet, that could easily change once Truforma starts bringing in revenue. In the meantime, it probably won't run out of cash anytime soon thanks to a recent stock offering.

The biggest reason to avoid an investment in the short term is that the market may have already priced in the economic impact of the launch of Truforma, thereby curbing any benefit of a stock purchase this month. (Year to date, the stock is up over 780%). This is a compelling argument, because in aggregate, investors already know what the product does, what its potential market size is, and (very roughly) the value of the intellectual property used to make it. So, buying the stock right now might not result in any additional upside when Truforma starts being distributed, or later, when Zomedica reports its earnings from early sales.

But potential buyers should keep this line of reasoning in the appropriate context. While it's probably true that the market eventually prices in all of the available information about a stock, it can't predict the future. If revenue from Truforma is larger than what is expected in the quarters after launch, there could still be significant upside for early investors. Just keep in mind that it probably won't be equal to the impressive growth that Zomedica's stock posted over the last six months.

There's also a risk that Truforma could be a commercial flop if veterinarians can't afford the device or if they find it to be ineffective. However, there's no evidence that this will be the case because the product hasn't hit the market yet.

At present, I think that Zomedica could be worth an investment that is small relative to the size of your portfolio. If the company performs well throughout the rest of this year and next year, it might be worth increasing your holdings further. Until then, it's a speculative purchase, even if it's one that I'm optimistic about.

For me, the risk of Truforma flopping isn't as significant as the argument that the market has already priced in the device's release and expected earnings in the near term. Right now, the stock probably isn't going to repeat its quadruple-digit percent growth anytime soon, even with the launch of Truforma.

So, if you keep your initial investment relatively small, you can still benefit from the potential upside of the launch and the next few earnings reports without worrying about major losses if things don't go as planned.