Investors are excited about the prospects for these two companies.

The stock market was turbulent again on Friday, aiming to finish the week with the same discontinuities that we've seen for quite a while. Today, it was the Nasdaq Composite's (^IXIC 0.00%) turn to shine, with the index rising more than 100 points just after noon EDT. That stood in stark contrast to declines or flat performances from most other major market benchmarks Friday at midday.

Helping to push the Nasdaq higher were strong performances from a couple of leading stocks. Facebook (FB 0.71%) has been doing quite well lately and is pressing toward all-time highs, while Peloton Interactive (PTON -2.46%) is well off its record levels after last month's Nasdaq correction. Both companies, however, have a lot of prospects to press higher in the months and years to come. Below, we'll take a closer look at what's happening with Facebook and Peloton.

Facebook's in a fighting mood

Shares of Facebook rose 5% at midday Friday. The company released an interesting new product to go with some of its cutting-edge technology, but it also had tough words for rival Apple (AAPL -1.07%). 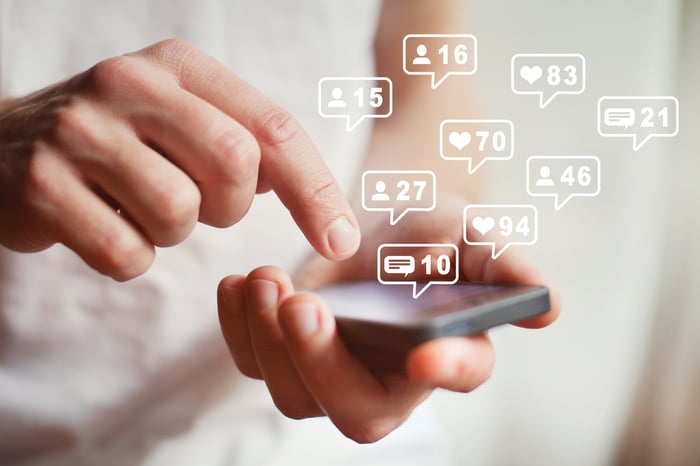 Facebook CEO Mark Zuckerberg expressed his dissatisfaction with changes that Apple recently made to its privacy policy. Of particular concern is Apple's tool for getting information on how various apps track user information, as Facebook has argued that the tool could put third-party content and service providers at a disadvantage to those within Apple's own ecosystem. Moreover, Facebook is just one of many companies criticizing the portion of in-app purchases Apple takes. Zuckerberg hopes that Apple users will see what the company is doing and make moves toward Facebook's platform.

Meanwhile, Facebook released a wristband product that will work with its augmented reality glasses. The new product will be part of Facebook's efforts to change the way humans and computers interact. Although it could take years for AR systems to get fully developed, Zuckerberg thinks that within the next decade, AR devices like this will enjoy widespread adoption.

It's easy to dismiss Facebook as a mature social media company. But there's a lot of growth happening at Facebook, and that makes the stock look attractive to many investors.

Elsewhere, shares of Peloton Interactive picked up nearly 5%. The maker of interactive fitness equipment got favorable comments from some Wall Street analysts.

The kind words for Peloton Friday came from B of A Merrill Lynch, which maintained its buy rating on the stock and its $175 per share price target. B of A Merrill admits that the company could face some headwinds as the stay-at-home trend comes to an end, but Peloton has an ambitious pipeline of products in development for the future. Whether people work out at home or in fitness centers and gyms, Peloton has opportunities to cater to them wherever they are.

Peloton has seen its stock sink substantially in 2021 and was close to B of A's price target in January before losing about 30% to 40% of its value in the correction. With the fitness equipment maker looking to solve production backlogs and move forward on multiple fronts, Peloton's stock looks intriguing at current levels.