Stocks closed the week on a mixed note again on Friday, as the disparities in performance across different sectors of the stock market persisted. It was the Nasdaq Composite's (^IXIC 0.00%) day to lead the pack higher, but the Dow Jones Industrial Average (^DJI 0.60%) fell sharply. The S&P 500 (^GSPC 0.95%) was mostly flat on the day.

The financial sector accounted for more than half of the Dow's drop on Friday, and a couple of government moves were behind the declines. One involved the Federal Reserve and a decision that will affect shares of Goldman Sachs (GS 0.30%), JPMorgan Chase (JPM 0.70%), and other bank stocks. The  other hurt shares of Visa (V 0.60%), and fellow card company American Express (AXP 3.14%) also fell in sympathy.

Shares of JPMorgan Chase and Goldman Sachs were down between 1% and 2% on Friday, making the financial sector one of the weakest performers on the day. The banks got word that they'd no longer be able to take advantage of some special treatment they'd received since the COVID-19 pandemic started. 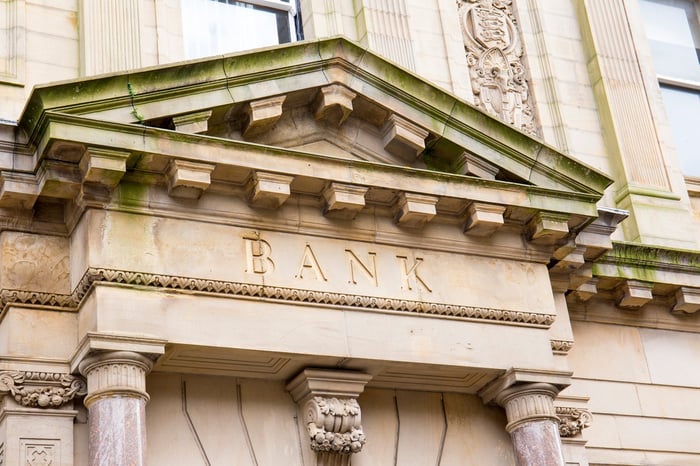 The specific provision at issue was the supplementary leverage ratio, or SLR, which the Fed imposed on certain banking institutions in the aftermath of the financial crisis in 2008 and 2009. The idea behind the SLR is to require that banks keep adequate capital to protect against potential losses.

However, when the pandemic began, the Fed relaxed the rules to ensure that banks would be able to continue lending. In particular, it allowed banks to exclude deposits with the Fed as well as their Treasury holdings from their capital reserve requirements. Those rules are set to expire on March 31, but banks had hoped they'd be extended.

Today, though, the Fed said that the SLR exemption would end as scheduled. That potentially puts banks in a bind, especially as savings rates among Americans have risen dramatically. Banks might have to turn away deposits if they would result in having to retain more capital than otherwise necessary.

The Fed did say it would look at ways to change the SLR rules to better reflect risk and leverage. However, for now, investors aren't happy that banks might have to pull back on their plans to return capital to shareholders through dividend increases and stock buybacks.

Meanwhile, shares of Visa were down more than 6%. The card giant said that the U.S. Department of Justice is investigating the way it handles its debit card business. Shares of fellow card issuer American Express (AXP 3.14%), which doesn't have as much debit card exposure as Visa, were down between 1% and 2% on the day.

Visa didn't offer a huge number of details on the DOJ investigation, saying that the government agency is looking at "Visa's U.S. debit practices." Multiple news sources reported that the focus of the investigation might center on antitrust-related allegations, with a look at how much power merchant customers of Visa and other debit-card issuers have to use cheaper alternatives for routing transactions.

This isn't the first time that credit and debit card companies have faced scrutiny over their practices. Many policymakers argue that the interchange fees that provide so much revenue for Visa and its peers are higher than they need to be. Moreover, concerns about a debit-transaction monopoly played a key role in preventing Visa's planned merger with fintech company Plaid.

Many bank investors were concerned that changes in Washington following the 2020 elections could lead to different positions on key issues. That appears to be happening today, and shareholders will have to wait and see if there's more coming down the road.

These After-Hours Winners Are Defying a Down Market

These 2 Dow Stocks Made All the Difference Friday

Dow Jones Rises Despite Rough Reports From Boeing and Visa