It's the latest sign of rotation on Wall Street.

The stock market has held up well even in the face of new challenges, and Monday brought continued optimism from market participants.

Some investors are nervous about the current macroeconomic environment and what it means for growth over the long run. But some of the factors they were most worried about were brought in check Monday, as Treasury bond yields sank to relieve pressure on interest rates. As of shortly before 11 a.m. EDT today, the Dow Jones Industrial Average (^DJI -0.88%) was up by 81 points to 32,709. The S&P 500 (^GSPC -1.66%) had picked up 25 points to 3,938, and the Nasdaq Composite (^IXIC -2.78%) moved higher by 143 points to 13,358.

Largely forgotten amid the rise of technology companies, transportation stocks have recently come to the forefront. As investors anticipate a massive economic recovery in 2021, they're looking for a rebound in activity for these industrial powerhouses. That argument got a big boost on Monday amid a huge planned merger in the railroad industry that could signal more merger-and-acquisition activity ahead for the industrial sector.

The news came from Kansas City Southern (KSU), a Missouri-based railroad with an extensive rail network across the U.S. and Mexico. Its stock shot upward by nearly 13% Monday morning after it and fellow railroad Canadian Pacific (CP -1.61%) announced that they would merge. 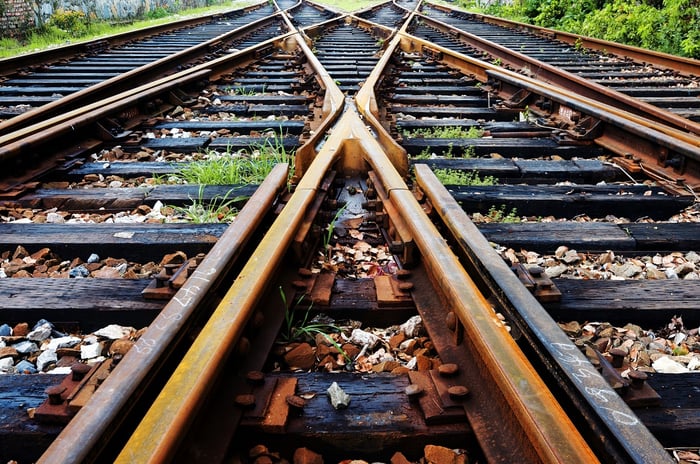 Strategically, the impact of the merger would be far-reaching for North American trade. The post-merger Canadian Pacific would become the first company with a rail network spanning Canada, the U.S., and Mexico, greatly facilitating movement of goods across the three nations. Kansas City Southern's Mexican operations include railways serving northeastern and central Mexico as well as key port cities including Veracruz, Tampico, and Lazaro Cardenas. That would be an important competitive advantage for a railroad that would still rank last in revenue among the six U.S. Class 1 railroad operators.

Will the deal get done?

Investors are excited about the potential for a railroad tie-up between Kansas City Southern and Canadian Pacific. However, it's far from a done deal given the need for regulatory approval.

In particular, the two railroads specifically reminded investors that a merger would be subject to getting the nod from the U.S. Surface Transportation Board. The regulatory obstacle proved to be one of the sore points when Canadian Pacific tried to buy Norfolk Southern (NSC -1.57%) in 2015 and 2016, as well as in earlier consideration of possible merger with CSX (CSX -1.28%) in 2014.

One advantage here, though, is that Kansas City Southern is notably smaller than either Norfolk Southern or CSX. That makes the competitive impact of a combination less severe. Moreover, both companies have looked at measures to appease any concerns among regulators, including an unusual two-step process for the merger. That will introduce a longer time period in getting a deal done, but it makes risks for investors less extensive as well.

Other railroad stocks were mixed, with CSX and Norfolk gaining ground while Union Pacific (UNP -0.75%) and Canadian National (CNI -1.96%) were down 2% to 3%. It's unlikely that the Canadian Pacific-Kansas City Southern merger will lead to further consolidation among the top railroads in the industry because of regulatory issues. Nevertheless, the merger does signal confidence in the future of North American trade relations, and that could have positive ramifications for merger activity elsewhere among transportation stocks in areas like trucking, shipping, and air freight.