Please ensure Javascript is enabled for purposes of website accessibility
Log In Help Join The Motley Fool
Free Article Join Over 1 Million Premium Members And Get More In-Depth Stock Guidance and Research
By Keith Speights - Mar 23, 2021 at 6:04AM

The "if" probably should really be "when."

The cannabis industry could soon be in a New York state of mind. Gov. Andrew Cuomo and state lawmakers continue to negotiate on a deal that could lead to the legalization of adult-use recreational marijuana. While no final agreement has been reached, it seems to be a question of when and not if.

There are several marijuana stocks that should be poised for explosive growth in the lucrative New York market. Here are three stocks to buy if and when the big state legalizes recreational marijuana. 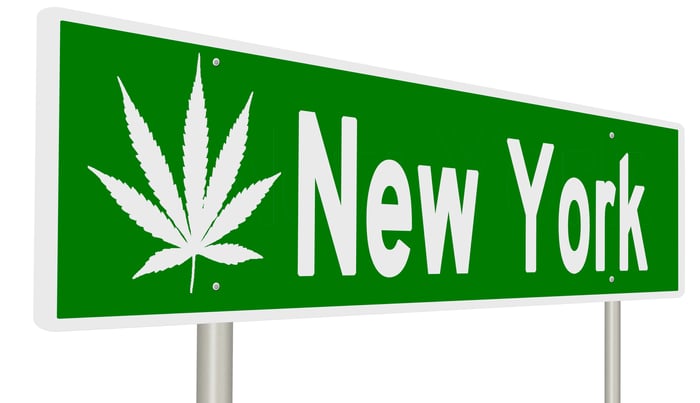 Curaleaf Holdings (CURLF -1.39%) ranks as the biggest multistate cannabis operators (MSOs) in the U.S. based on market cap and revenue. It's also one of the best-positioned MSOs to win should New York legalize recreational pot.

The company currently claims a market share in New York's medical cannabis market of over 25%. That's enough to make Curaleaf the No. 1 player in the state's cannabis market right now. Curaleaf operates four retail dispensaries and one cultivation center in New York.

CEO Joe Bayern thinks that adult-use marijuana legalization in New Jersey will help push New York, as well as Connecticut and Pennsylvania, to legalize recreational marijuana. He recently stated that these markets "present an enormous growth opportunity" for Curaleaf.

Growth has been seemingly easy for the company so far. Curaleaf's revenue more than tripled year over year in Q4 and jumped 26% from the previous quarter. The company expects 2021 to be another record year. If New York legalizes adult-use cannabis, the year will likely be even better than expected.

The latter example offers a parallel to New York. Cresco already operated a medical cannabis dispensary in Arizona before the state legalized recreational pot. It's likely that the company would pursue a similar path should New York move forward with adult-use legalization.

One advantage that Cresco has over Curaleaf from an investing standpoint is valuation. Curaleaf's market cap is more than 3.5 times larger than Cresco's, but its revenue isn't nearly that much greater than Cresco's.

There's an even more attractively valued cannabis operator that could jump into the New York market: Ayr Wellness (AYRW.F -1.28%). Its shares currently trade at a lower price-to-sales multiple than any of the leading MSOs.

Ayr doesn't compete in New York's medical cannabis market right now as Curaleaf and Cresco do. However, the company expects to close on an acquisition in Q3 that will give it a presence in neighboring New Jersey. The opportunity in New York could be hard for Ayr to pass up if the state legalizes recreational marijuana.

The MSO is also moving quickly to expand into other attractive markets. Ayr's acquisition deals in Arizona and Ohio should wrap up any day now. It's also planning to purchase Liberty Health Sciences to become a major contender in Florida's medical cannabis market.

Ayr continues to generate strong revenue growth. It also consistently delivers positive and growing adjusted earnings before interest, taxes, depreciation, and amortization (EBITDA). The stock is less of a sure thing for the New York market as Curaleaf and Cresco. However, the likelihood that Ayr will enter New York along with its relatively low valuation make it a stock investors will want to consider buying.