Please ensure Javascript is enabled for purposes of website accessibility
Log In Help Join The Motley Fool
Free Article Join Over 1 Million Premium Members And Get More In-Depth Stock Guidance and Research
By Jim Halley - Updated Mar 30, 2021 at 11:26AM

The ammunition maker's stock dropped this week with President Joe Biden calling for more gun control in the wake of a mass shooting in Colorado. Does it make sense to buy the stock on the dip?

Vista Outdoor (VSTO -6.91%) was among those stocks associated with shooting sports that took a hit in the market on the news. A key factor is that Vista Outdoor doesn't sell guns –- it gave up that side of its business by selling its Savage Arms and Stevens firearms brands in 2019 –- but it is one of the largest manufacturers of ammunition in the country. 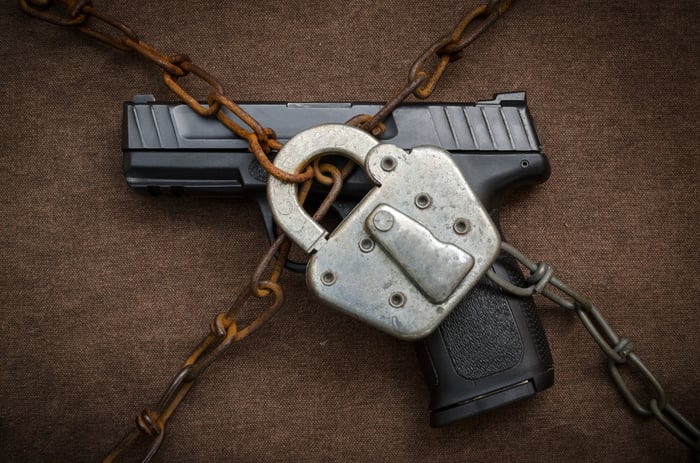 For every action, there's a recoil

Ironically, while calls for more gun control may have hurt the company's share price in the short term, they will likely help the company's bottom line.

It's a well-known phenomenon: Every time the national discussion about gun control heats up, people go out and buy more guns and ammunition. Those concerns manifested themselves before and after the November elections and already appear to be doing so this month.

According to the FBI's National Instant Criminal Background Check System (NICS) firearms data, there were 3.7 million background checks for firearm purchases in the U.S. in February, compared to 2.8 million in the same month in 2019. So far this year, NICS firearms checks are running nearly 41% ahead of last year's pace.

That trend will drive sales for Vista Outdoor products, and the company already has had a great run lately. In its recent report for its fiscal third quarter, which ended Dec. 27, sales came in at $575 million, up 35% year over year. Gross profit rose 84% percent to $163 million, and fully diluted earnings per share were reported as $1.31, compared with $0.25 in the prior-year quarter.

The segment that did the best was Vista's shooting sports, which reported sales of $402 million in the quarter, up 41% compared to the same period in fiscal 2020. Gross profit for the division was $114 million, up 120% year over year. The company's outdoor products segment also did well, thanks to the pandemic increasing people's interest in doing something -- anything -- to get out of the house. The division's sales were up 24% year over year to $173 million and gross profit was $50 million, up 35% compared to the same period in 2019. 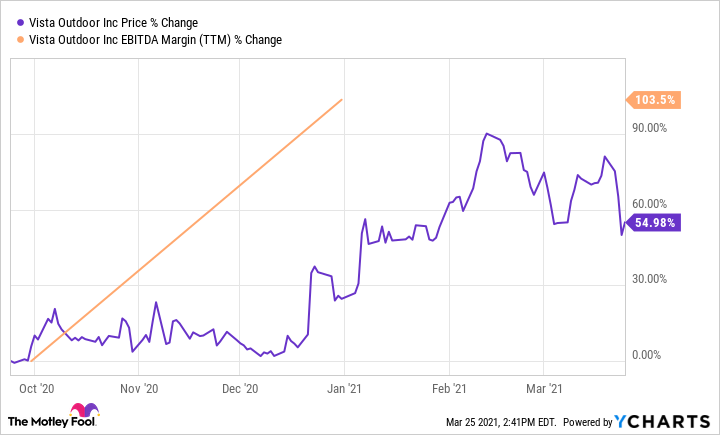 What concerns some investors

If more effective gun control is adopted, either through executive order or by legislation, the worry for some in the industry is that it will put a damper on gun sales. That could definitely happen, although the likelihood of the Senate passing significant gun control legislation is dim as long as the filibuster is intact.

Other factors could hurt Vista's sales. In 2019, Walmart quit stocking ammunition, and other retailers, in light of the recent shootings, could do the same this year. Of greater concern is if the talk of gun control goes away, then gun sales would drop as much as they did in the first few years after Donald Trump was elected president in 2016.

However, even if effective gun control is passed, that's not likely to slow Vista's ammunition sales for the near future. First, the prospect of legislation will likely spark a buying frenzy of guns and ammunition, as was seen prior to the November election and during the Obama administration.

A bigger concern for gun owners is that there's already an ammunition shortage -- but that works to Vista Outdoor's advantage. CEO Chris Metz, in the company's second-quarter earnings call in November, said the company had a year's backlog of ammunition orders, about $1 billion worth. That explains why the company spent $81.4 million in October to acquire Remington Arms' ammunition and accessories businesses, its Arkansas manufacturing facility, and Remington's intellectual property. Metz wouldn't go into great detail in the company's third-quarter earnings call regarding the backlog, only saying it still continues and demand has increased.

Vista Outdoor's share slump is likely to be short-lived, certainly not past the company's next quarterly report.

The company's revenue will be driven by two trends that are unlikely to go away anytime soon. Gun enthusiasts' worries about stricter gun control will continue to drive gun sales –- and Vista's related gun products' sales – for the next few years.

On the other side of the company's business, the rise in outdoor activities that was sparked by the COVID-19 pandemic will continue. It may, in fact, change some peoples' habits even after COVID-19 concerns subside, whenever that may be.