Please ensure Javascript is enabled for purposes of website accessibility
Log In Help Join The Motley Fool
Free Article Join Over 1 Million Premium Members And Get More In-Depth Stock Guidance and Research
By Zhiyuan Sun - Mar 27, 2021 at 6:10AM

This fast-growing marijuana company comes with a surprise.

Village Farms International (VFF -2.79%) has been one of the top-performing marijuana stocks over the past 12 months. During that period, the pot producer's shares saw a mind-boggling 358% return. For comparison, the industry benchmark Horizons Marijuana Life Sciences Index ETF's (HMMJ -5.79%) total returns grew 128% during the same period. What makes Village Farms international so unique among its peers?

As it turns out, pot-growers that are well-capitalized, growing their sales year-over-year, and turning a solid profit are in short supply. Village Farms happens to satisfy all three categories and then some. Let's look more closely to see why this is a top marijuana stock to buy now. Right now, Village Farms has the best-selling dried cannabis brand in Canada's most populous province, Ontario. Its product selection also includes vape cartridges, pre-rolls, oils, and gummies. The company owns 100% of its pot-growing subsidiary, Pure Sunfarms, which has operations in five provinces covering 70% of the legal marijuana market in Canada. 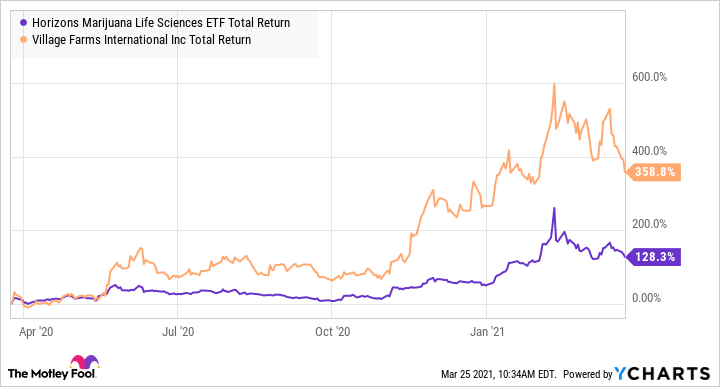 Its goals include capturing a 20% share of the dried cannabis market in terms of sales volume and reaching one of the top two positions nationally in other branded products. Since the company relies on a distribution-based model rather than operating its own dispensaries -- 97% of its cannabis sales were to other pot-growers back in 2019 -- its costs are kept to a minimum.

For these reasons, Village Farms managed to increase its assets net of debt to $205.3 million last year, a significant improvement over the $126.5 million in net assets it had in 2019. What's more, the company is also investing in a state-of-the-art 130-acre marijuana cultivation facility in Texas to take advantage of the booming weed market across the border. Village Farm also owns a 6.6% stake in Asia-Pacific cannabidiol (CBD) start-up, Altum International. That subsidiary recently opened Asia's first dedicated CBD consumer outlet in Hong Kong.

Not just about pot

Village Farms is about more than just growing marijuana. It also runs a successful operation cultivating tomatoes, cucumbers, and peppers. That might sound a little more boring than pot, but the company is highly competent at what it's doing. In its 30 years of operations, the company now has five high-tech greenhouse operations to grow up to 500 acres of produce.

Last year, its revenue increased by 18% over 2019 to $170.1 million. Correspondingly, its stock is trading for 4.5 times sales, which is a pretty fair price to pay for that kind of growth. What's more, Village Farms is consistently profitable. Its net income increased by a staggering five-fold from 2019 to 2020 for a total of $11.6 million. Village Farms is on a hot streak -- this was the company's eighth consecutive quarter of profitability.

Village Farms enjoys (relatively) massive 14% insider ownership, great revenues, continuous profitability, ample diversification, plus a reasonable valuation. Typically, less than 10% of pot-grower shares are owned by their insiders. All of these traits paint a great picture of Village Farms, and make a solid argument for marijuana investors to add this jewel to their portfolios.