Please ensure Javascript is enabled for purposes of website accessibility
Log In Help Join The Motley Fool
Free Article Join Over 1 Million Premium Members And Get More In-Depth Stock Guidance and Research
By Manali Bhade - Mar 28, 2021 at 6:11AM

These companies are set to keep riding upward thanks to long-term secular trends.

What do a leading fintech player, a mobile communications company, and a key supplier to the bioprocessing industry all have in common?

The businesses in question are PayPal (PYPL 5.96%), Digital Turbine (APPS 6.47%), and Repligen (RGEN 6.83%), and they've all gained ground amid the pandemic -- and over the longer term, all have grown into dominant players in their respective niches. These fundamentally strong companies are riding structural tailwinds, and look to be buy-and-hold gems for the long haul. 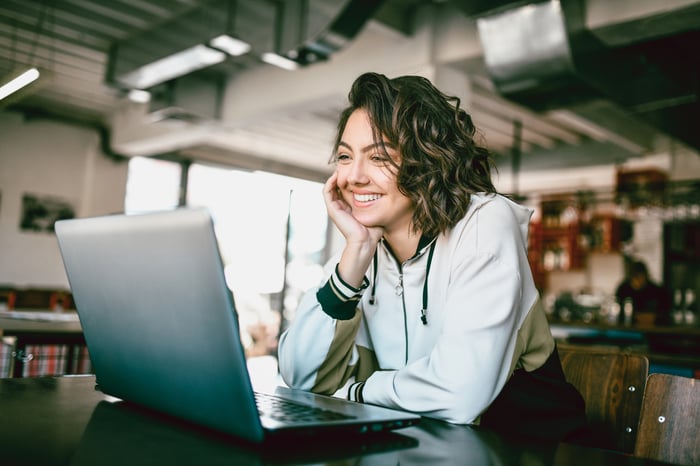 Going beyond its core online payments business, the fintech leader has launched several cashless payment features for in-store purchases including tap-and-pay, payment cards, and QR codes. Currently, PayPal payment options are accepted by more than 600,000 retailers. With merchants experiencing double-digit-percentage increases in average basket size from customers using QR codes, expect more sellers to begin accepting them. In 2020, almost 10 million customers used PayPal's services to make in-store purchases worth over $20 billion. Management has forecast that the in-store retail purchase market will be worth $8 trillion by 2025.

In 2020, PayPal introduced features such as "buy now and pay later," bill payment, direct deposits, and check cashing to its PayPal and Venmo wallets. The "buy now and pay later" option has already been used by 3 million customers and accounted for $750 million of TPV in the first full quarter after it was launched. The company is also allowing individuals to buy, sell, and hold cryptocurrencies through their PayPal accounts -- and it plans to allow them to use cryptocurrencies to make purchases at its 29 million merchants this year.

PayPal stock has already gained more than 140% in the last year. However, this is a rock-solid secular growth story that can continue to reward investors for many years to come.

Digital Turbine acts as an intermediary between advertisers, Android mobile original equipment manufacturers (OEMs), and mobile operators. It helps advertisers place their apps on phones of partner OEMs and carrier networks, either by preloading them into new devices or by later suggesting them to users based on their specific interests. The company's Single Tap technology has further improved the chances that users will install the recommended apps.

Digital Turbine has already installed its core software platform, DT Ignite, on over 570 million mobile devices. In its fiscal 2021 third quarter, which ended Dec. 31, the company added 65 million devices, a year-over-year rise of over 50%. Most of this growth came from international markets, but some was also attributed to the 5G-driven upgrade cycle in the U.S. These tailwinds will continue to drive its growth.

Digital Turbine's targeted advertising strategy has resulted in higher consumer engagement and better return on investment for advertisers. The company's revenue per device rose year over year by more than 25% in the U.S. and over 65% in international markets in its fiscal third quarter. Network effects have also created a strong moat. Beyond its application media revenues (from DT Ignite and Single Tap), the company's content media products have diversified its revenue base and boosted margins.

In its fiscal Q3, Digital Turbine's revenues jumped 150% year over year to $88.6 million. Almost half of these revenues are recurring in nature, mostly derived from the content media business. The company's adjusted net income also soared year-over-year by 300% to $20 million. It also has a strong balance sheet with $43.7 million in cash and $19 million of debt.

Digital Turbine is currently trading at a forward price-to-earnings multiple of 88.7, which is rich. However, considering that the company has penetrated less than 16% of the 3.6 billion smartphone user base, it still has much scope for growth. This is a multiyear opportunity and investors can earn significant returns from this stock, even if they invest in it at these elevated levels.

Repligen supplies technology, systems, and consumables to the bioprocessing industry. The company has become a dominant player in filtration and pre-packed chromatography -- processes used to purify and improve the yields of biologics during bioprocessing. Recently, Repligen entered the process analytics field, developing technologies that take real-time measurements of proteins, plasma DNA, and nucleic acids while bioprocessing is ongoing.

The rapid pace of clinical development and commercial-scale production of biologics, gene therapies, and cell therapies, as well as COVID-19 vaccines and therapeutics, has dramatically driven up demand for bioprocessing. Repligen has estimated its total addressable market to be worth $3.7 billion, which is only a part of the $12 billion global bioprocessing market.

The company's offerings are highly suited to single-use type manufacturing and continuous manufacturing, two major trends that are poised to make bioprocessing more flexible, less susceptible to contamination, and more productive. The company is prioritizing capacity expansion and increasing penetration in gene-therapy bioprocessing in 2021.

Trading at a forward P/E multiple of over 91, the stock is not cheap. Repligen also competes with bigger players such as Danaher (DHR 5.87%), MilliporeSigma, and Thermo Fisher (TMO 5.97%). However, despite the competitive pressures, Repligen has managed to make its mark. With a market capitalization of just over $11 billion, this high-growth company could also become an attractive takeover target in the coming years. The stock has gained over 130% in last year, and it has the potential to soar even higher in the coming decade.

3 Unstoppable Stocks That Can Leave Dogecoin in the Dust

3 Top Stocks That Will Make You Richer in April (and Beyond!)