Please ensure Javascript is enabled for purposes of website accessibility
Log In Help Join The Motley Fool
Free Article Join Over 1 Million Premium Members And Get More In-Depth Stock Guidance and Research
By Alex Carchidi - Mar 28, 2021 at 9:14AM

These companies are perfect for investors with a long time horizon.

If you're considering investing your family's stimulus funds in the stock market, it's paramount to be responsible. Building wealth is a marathon, and there's generally money to be made by playing the long game.

After you've conquered the financial-health basics -- like establishing an emergency fund and paying off high-interest debt -- picking the right investments will maximize the chance of growing your principal through thick and thin. It's key to look for stocks that have an evergreen business model and a long history of successful execution, rather than tempting targets like hot-shot penny stocks or speculation plays. Let's investigate two solid options that fit this bill. 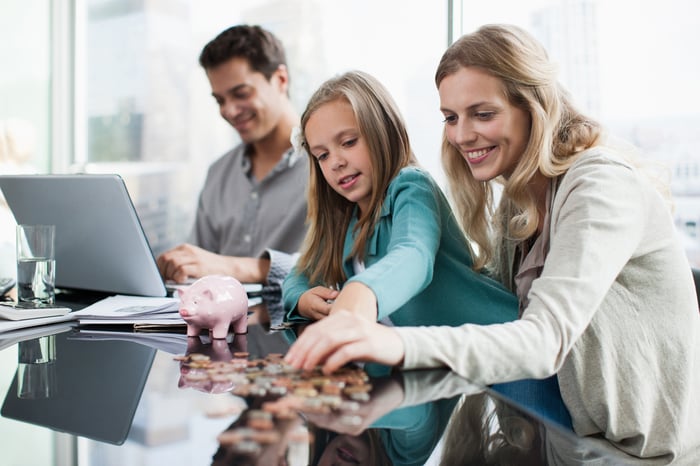 As its name somewhat implies, STAAR Surgical (STAA 2.62%) makes surgically implantable lenses for ophthalmology that correct a variety of ocular issues ranging from nearsightedness to astigmatism. While the market for vision correction might not sound very dynamic or prone to long-term growth, STAAR is a stalwart competitor nonetheless. It's profitable, it has minimal debt compared to its $163.46 million in trailing-12-month revenue, and its gross margins are slowly increasing over time.

STAAR's revenue is also growing at a steady clip, with a three-year compound annual growth rate (CAGR) of 22%, and its stock price is expanding as well. . Plus, the number of people who could use its products is projected to keep growing through at least 2050, when nearly 5 billion people will be nearsighted, representing about half the total human population.

It's a bit concerning to hear that a larger and larger proportion of the population will be myopic, but at least there are effective solutions already lined up. If the success of corrective technologies like glasses and contact lenses are any indication, there will be quite a few people interested in STAAR's lenses.

To top it off, while the pandemic dampened sales for several of the company's competitors in the surgical tools industry, it couldn't stop STAAR from reaching its 2020 sales targets. With demonstrated resilience like that, investors will need to pay a premium to buy the stock -- but the long-term upside will be worthwhile.

Whereas STAAR Surgical competes by excelling in a specialized and in-demand niche, Johnson & Johnson (JNJ 0.40%) takes the opposite approach by making a plethora of different mass-market products that people need to live. Simply put, Tylenol and Band-Aids seem to never go out of fashion, and it's hard to imagine anything coming along that could disrupt their prevalence in a significant way. Thanks to Johnson & Johnson's product portfolio, which is packed with similar consumer healthcare goods, the company's long-term prospects have been favorable for quite some time. 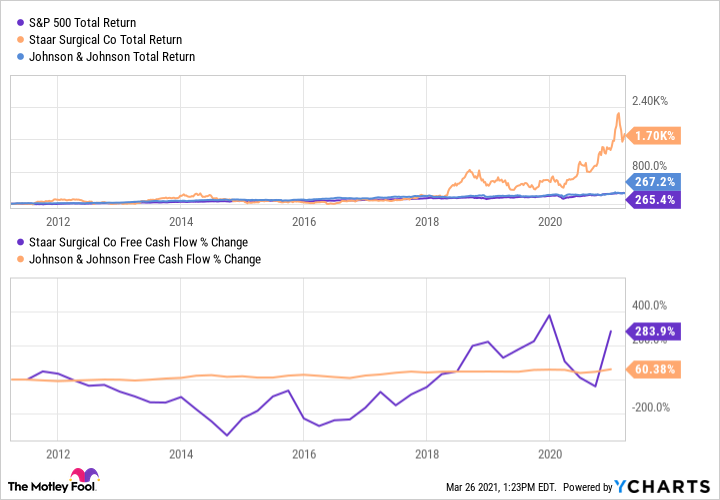 But that doesn't mean it's going to grow as quickly as a smaller company might. In 2020, its sales increased by 0.6% compared to 2019, and its earnings dropped by 8.1% as a result of a punishing fourth quarter. Potential investors shouldn't be rattled, as it has endured many such setbacks in its many decades of operation.

Over the last decade, its free cash flow has increased by more than 60%, so it's safe to say that it isn't going anywhere anytime soon. Typically, the company puts a hearty helping of its cash into research and development, which safeguards future revenue by packing its pipeline with promising new products, like its recently released coronavirus vaccine.

Perpetually rising free cash flow is great for Johnson & Johnson's long-term health, but it's also good for shareholders, who have benefited from its ever-increasing dividend and occasional share repurchases all the while. The stock might not always beat the market in total shareholder returns, but if management's predictions for performance this year are any indication, it might be better to buy sooner rather than later.