Please ensure Javascript is enabled for purposes of website accessibility
Log In Help Join The Motley Fool
Free Article Join Over 1 Million Premium Members And Get More In-Depth Stock Guidance and Research
By Billy Duberstein - Mar 29, 2021 at 7:06AM

Yet each cannabis stock was down for the week, some materially so. That was despite not only good company results, but also positive developments on U.S. federal and state regulations. So is the post-earnings dip a buying opportunity for these companies? 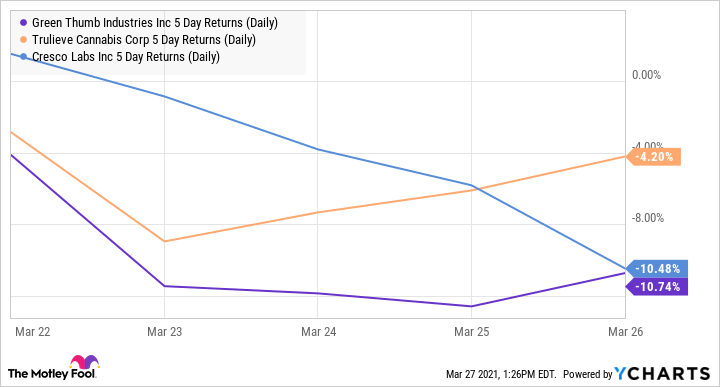 With cannabis dispensaries' designation as essential businesses during this stressful time, and with new stimulus checks for Americans to spend, cannabis has been flying off the shelves in the U.S. across many states.

The trend continued into Q4 2020, with these three leading U.S. MSOs each topping their revenue estimates, while reporting solid profitability on an EBITDA basis:

All three companies are posting strong growth and good margins, at least on an adjusted EBITDA basis. Green Thumb has the widest distribution among the three, with operations in 12 states. It's seeing rapid growth and margin expansion, especially in the core markets of Illinois and Pennsylvania.

Meanwhile, Trulieve is growing slower but has a higher margin. That's a function of its focus on a single state, Florida, where it has over 50% market share and vertical integration. But it's also embarking on three new states -- Pennsylvania, Massachusetts, and West Virginia. It's unclear whether its margin will remain quite as high as it grows, but the new states should help it sustain higher growth rates in the future.

Meanwhile, Cresco has grown very aggressively, pursuing large-scale production and wide distribution as it pursues its branded wholesale strategy, more like a regular consumer packaged-goods company. Revenue growth has been huge, as Cresco ramped up new facilities in several states during 2020. While it's growing faster and margin has expanded, its margin is lower than those of the other two companies, probably because of its emphasis on wholesaling. 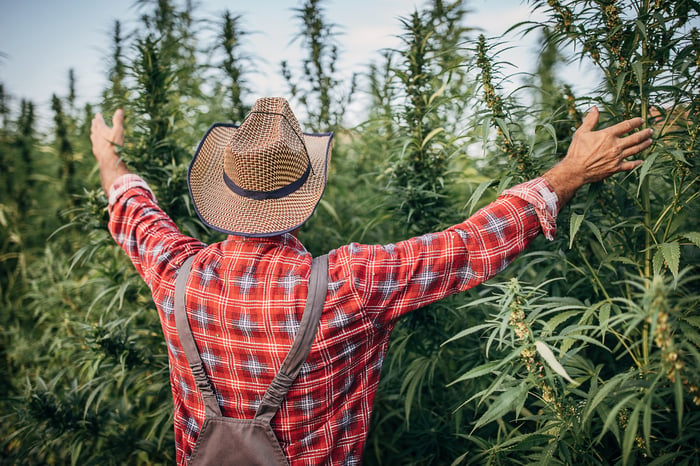 Yet their stocks went down

Despite these great results across the board, all three stocks fell during the week. The declines seemed to be related to profit-taking, with already-rosy expectations somewhat baked in. After all, these three stocks have more than doubled over the past six months. 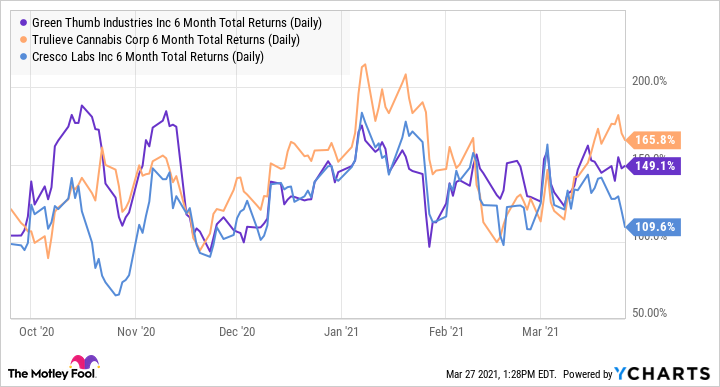 All of these stocks are much more expensive than they used to be, but that's a reflection both of great results over the past few quarters and expectations that the Democratic Congress might roll back federal cannabis regulations. Since there hasn't been too much news on the latter front lately, as Congress focuses on other matters, U.S. cannabis stocks were due for a pullback, much like other technology winners from 2020.

Cannabis stocks may not rise materially from here unless there are more regulatory rollbacks. But one bill may be coming soon. The SAFE Banking Act, introduced in the House of Representatives in 2019, is back under consideration. The difference between now and then is that a Democratic Senate is also on board. The Senate bill also has bipartisan support, as it's co-sponsored by Oregon Democrat Jeff Merkley and Montana Republican Steve Daines.

The SAFE Act would allow national banks to do business with state-legal cannabis companies without fear of prosecution. That would help lower both operational costs and the costs of capital for these U.S. cannabis companies.

In addition, New York legislators recently cut a deal on legalizing adult-use cannabis in the state -- a place where Green Thumb and Cresco already operate medical dispensaries. Though adult-use operations may be far off, as complex rules on distribution, social equity, licenses, and tax revenue are worked out, it's yet another instance of more state-level momentum gathering for cannabis. And New York is a very populous state at that.

After their big run, each of these companies was probably due for a consolidation period. However, there was certainly nothing wrong with their operating results, so it could be an opportunity for longer-term-oriented investors.

After all, the U.S. cannabis industry is set to grow from roughly $60 billion today to $100 billion by 2030, according to investment bank Cowen. However, less than a third of the U.S. market is in legal cannabis sales. Cannabis news site Leafly estimates that 2020 legal cannabis sales were only $18.3 billion, although that figure was up a whopping 71% from 2019.

That industry growth should benefit all participants as legal sales take more share from the illicit market, especially the large first movers that are establishing their brands early.

One big headwind to note

Though so many things are going in cannabis companies' favor, one big headwind remains. All of these companies are still being taxed at an exceptionally high rate based on gross margin, and that will remain the case even if the SAFE Act passes. For instance, last year, Trulieve, the highest-margin cannabis company, still paid $94.5 million in taxes on $157.5 million in pre-tax income -- equal to a 60% tax rate!

Since interest rates are moving up, high-growth but unprofitable businesses such as cannabis and tech are feeling the pain. Cannabis companies would be highly profitable if they were allowed to escape Section 280e of the IRS code, which states that "no deduction or credit shall be allowed in running a business that consists of trafficking a controlled substance." Until then, these stocks will probably act like high-growth tech stocks.

Still, the more legitimate the cannabis business becomes across more states and the more people it employs, the more pressure there may be on lawmakers to pass the STATES Act, which would allow state-legal cannabis businesses to escape being taxed on gross margin under Section 280e, therefore allowing them to make profits.

Without the STATES Act, or a decriminalization of cannabis that the MORE Act would provide, it will be hard for these companies to make a lot of net income. Still, if the SAFE Act passes, it could help these stocks break out of their recent funk and potentially foster optimism that more sensible cannabis regulation is coming in the near future.