Please ensure Javascript is enabled for purposes of website accessibility
Log In Help Join The Motley Fool
Free Article Join Over 1 Million Premium Members And Get More In-Depth Stock Guidance and Research
By Keith Noonan - Mar 29, 2021 at 8:40AM

Investors should be ready to buy great stocks when the market takes a turn for the worse.

March has probably been at least a little painful for many tech-focused investors. After posting impressive gains for much of the last year, valuations in the sector have recently been under pressure due to rising bond yields and a possible investor pivot to less volatile sectors, including energy and industrials. It could be that the worst has yet to come.

The next market crash is always a question of when, not if. And the technology sector could be hit particularly hard after its huge rally. But buying high-quality growth stocks during a crash is likely to dramatically improve your long-term investment performance.

Read on for a look at two industry-shaping tech companies that could deliver big wins for your portfolio. 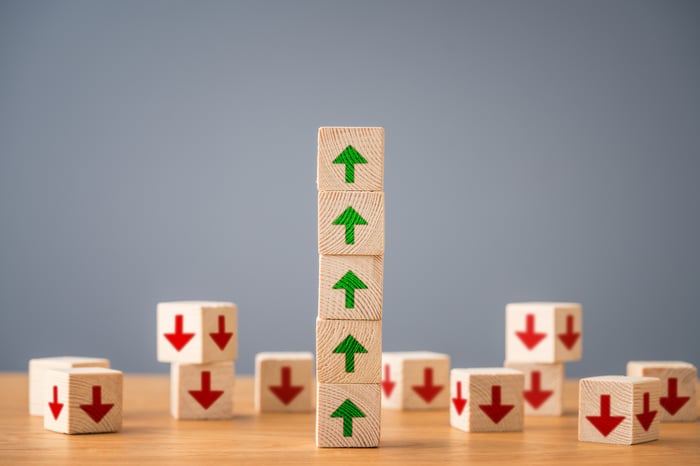 Banking and investment magnate Nathan Rothschild, who died in 1836, has been credited as the originator of the famous quote, "Buy when there's blood in the streets, even when the blood is your own."

Within that mold, Bumble (BMBL -3.94%) is a stock that's already in my portfolio, and it's one that I'd be eager to build a bigger position in if shares were to take a dive during a market crash.

The dating app specialist held its initial public offering in February, and shares already present plenty of long-term upside after having fallen roughly 18% from the stock's first-day opening price of $76 per share. But I won't complain too much if shares move lower, creating an opportunity to add to my position -- even if a crash would put a dent in my current holdings.

Taking a long-term approach to investing allows you to ride out otherwise painful price swings, and online dating is an industry that should continue to see big growth through the next decade and beyond.

Bumble's namesake app is well differentiated in the space. It's built around women sending the first message to potential romantic interests. This represents a substantial break from the norms of the dating app world, where men typically make the first move, and it's a feature that's helped the app stand out and quickly attract a sizable user base (2.7 million paid users as of the end of last year).

The company also owns Badoo, a more traditional dating app that has a large user base in Europe, Latin America, and other international markets.

Overall sales surged 31% year over year in the fourth quarter, and growth accelerated sequentially as easing coronavirus restrictions helped boost user engagement. Revenue for the Bumble app specifically increased 47% in the quarter, and it looks like the company's growth story is still just heating up.

More people already meet their romantic partners online than through friends, at bars, or any other way, but Bumble is still just starting to tap into its large -- and growing -- addressable market. If shares were to go on sale in a market crash, investors who seize the buying opportunity could put themselves in position to enjoy fantastic returns.

Video games have seen heightened levels of engagement amid the social distancing required by the coronavirus pandemic. Activision Blizzard (ATVI -0.07%) has been a major beneficiary of that trend, and the company continues to have a favorable growth outlook even if pandemic-related tailwinds dissipate. It's another top stock in my portfolio that I'll be looking to build on the next time the market tumbles.

The company scored a huge hit when it released the first big-budget installment in its Call of Duty franchise for mobile platforms in late 2019, and the game's long-term sales outlook relative to its development budget has the title on track to be hugely profitable. The game is on the way to generating over $1 billion in player spending by the end of 2021, and it looks like Call of Duty: Mobile will continue to be a performance driver far past that point. The franchise is also poised for continued longevity on PC and consoles.

With impressive performance across multiple platforms, Call of Duty has been Activision's most visible franchise lately, but it's far from being the company's only asset. The video game publisher's major properties include World of Warcraft, Candy Crush Saga, Overwatch, Diablo, and other hits.

Activision is still in the early stages of building its mobile franchises, expanding in many international markets, and pursing potentially explosive growth categories such as esports and product licensing. The long-term outlook for interactive entertainment and franchises in the video game space remains very promising, and Activision Blizzard should be able to hold onto its position as an industry leader and deliver strong returns for investors.