Please ensure Javascript is enabled for purposes of website accessibility
Log In Help Join The Motley Fool
Free Article Join Over 1 Million Premium Members And Get More In-Depth Stock Guidance and Research
By Patrick Bafuma - Updated Apr 1, 2021 at 8:12AM

Which healthcare company is a better play for the next decade?

Abiomed (ABMD 2.05%) and Guardant Health (GH -2.09%) both sport market caps just north of $13 billion, but these companies represent very different ways to invest in healthcare stocks for the next decade.

Abiomed is the maker of Impella, a temporarily implanted device meant to help protect the heart when it's been damaged or during complex procedures. Guardant Health, meanwhile, utilizes a blood test to perform a liquid biopsy to determine whether a patient has cancer, and if so, what treatment regimens would be best. The company's tests also detect "minimal residual disease" -- that is, "Is there still evidence of cancer and does the patient need more treatment?" 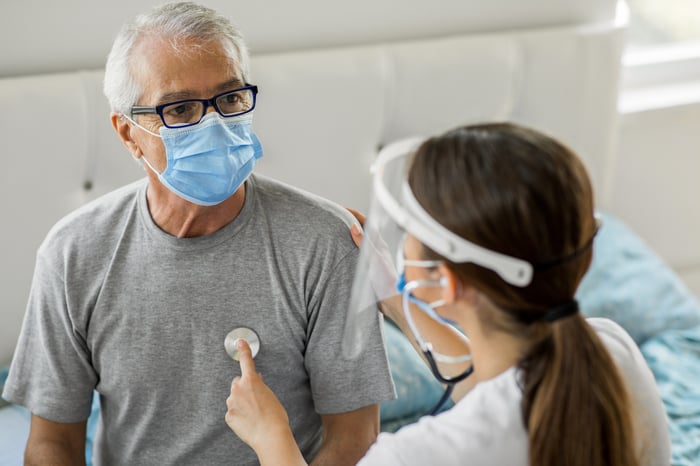 Will the good times continue?

Over the years, Abiomed's Impella technology has improved (in part by becoming smaller in size) and its indications have expanded, as evidenced by the company's compound annual growth rate (CAGR) of about 25% since 2005 and a stock price that has tripled in the past five years. Guardant, too, has more than quadrupled since its October 2018 IPO, and seemingly every few months posts exciting data demonstrating that its blood test can predict responses to specific cancer therapies. This means oncologists are likely to not only continue using Guardant's tests, but increase their usage of Guardant's tests as oncologists learn how to better tailor therapy to the patient in part due to Guardant's growing ability to better predict patient response to treatment.

But while Abiomed is a cash cow, profitable since 2012 and sitting on a cool $788 million, Guardant posted an adjusted EBITDA loss of $85 million for fiscal year 2020. Abiomed sports juicy margins in the 78% to 83% range, while Guardant had 64% gross margins in 2020.

Part of the reason for this difference is the landscape in which the two companies operate. Guardant is an innovator in a large, growing market. The worldwide liquid biopsy market is estimated to be worth about $6 billion annually, while worldwide testing for minimal residual disease is estimated to be $15 billion annually. This has attracted many other competitors, including Roche's (RHHBY -0.54%) Foundation Medicine, Illumina's (ILMN 0.89%) Grail, Exact Sciences (EXAS 1.13%), Natera (NTRA 0.51%) CareDX (CDNA 2.53%) Veracyte (VCYT 1.06%), and Invitae (NVTA -1.16%), to name a few. Abiomed, on the other hand, has little competition.

Also, while both companies have significant market penetration, only one appears to be growing. Abiomed has nearly saturated the U.S. market. Its devices are found in 1,492 of 1,788 U.S. hospitals, and that penetration is evident in the company's 2% decline in year-over-year U.S. patient growth in fiscal 2020 (it saw 3% growth in Europe and 37% growth in Japan). Management is hoping that the COVID-19 pandemic may have affected those numbers and is guiding for about 10% growth in fiscal year 2021.

Compare this to Guardant, which posted revenue gains of 34% year over year for 2020. That amounts to $288 million in revenue, with clinical testing revenue increasing 70% over the prior year. While just more than 75% of U.S. oncologists ordered a Guardant test in 2020, the company still only has 5% of the colorectal testing market and 13% of the lung cancer market, demonstrating plenty of runway for growth. Guardant is guiding for revenue of $360 million to $370 million for fiscal 2021, representing 26% to 29% growth year over year, with clinical volumes for 2021 expected to be greater than 90,000 tests, growing at least 42% over 2020 numbers.

With significant penetration into oncology practices and positive data for disease monitoring (also known as minimal residual disease) regularly being released, I expect Guardant's testing volume and revenue to continue to increase. Guardant has demonstrated early success despite heavy competition, and it doesn't need to conquer the entire market in order to reap massive rewards for investors. While Abiomed's profitability and cash pile may limit its downside, the slowing of Impella's growth and the company's overall lack of innovation make me believe that multi-trick pony Guardant is the better play for healthcare investors for the next 10 years.