Please ensure Javascript is enabled for purposes of website accessibility
Log In Help Join The Motley Fool
Free Article Join Over 1 Million Premium Members And Get More In-Depth Stock Guidance and Research
By Zhiyuan Sun - Apr 2, 2021 at 6:20AM

Here's how shares a diversified e-commerce firm, an immunotherapy biotech, and an electronic agreement company can make you rich.

The Nasdaq 100 has had an absolutely wild year. Over the past 12 months, the blue chip tech index returned an astonishing 68% to investors. Among the best performers of the index are companies with the most innovative products or services. Shares of Sea Limited (SE 22.70%), Fate Therapeutics (FATE 11.05%), and DocuSign (DOCU 13.36%) have all gone up anywhere between 124% to 434% over the past year. Let's look at how they can continue to add muscle to your portfolio in 2021 and beyond. 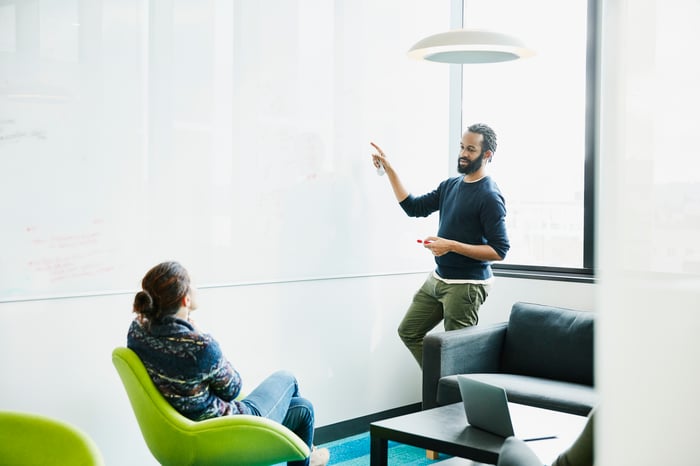 As a holdings company, Sea Limited is simultaneously an e-commerce retailer, video game publisher, and financial services company. It currently holds the most market share in e-commerce in Southeast Asia with its subsidiary, Shopee. Shopee is an online shopping platform similar to Amazon. In Q4 2020, Shopee's revenue increased by 178.3% to $842.2 million. 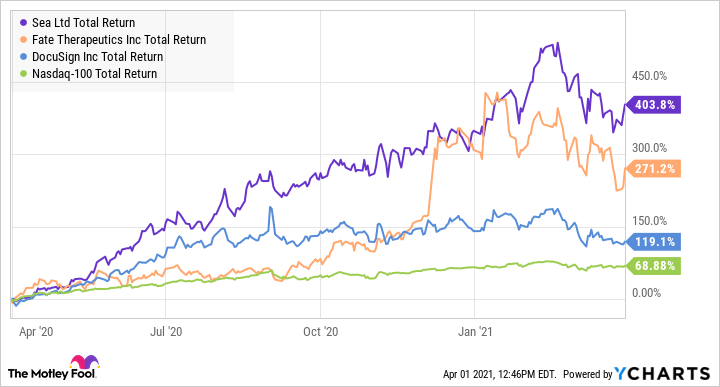 During that time, the company's battle royale-style game, Free Fire, became the most downloaded game in the world. Its multi-player gaming platform, Garena, also saw its quarterly active users increase by 72% year over year to $610.6 million. Overall bookings in its video game segment more than doubled annually to $1 billion.

There are also now more than 23.2 million users utilizing SeaMoney for payment solutions. Roughly half of these users are from Indonesia. Despite its high growth rate in adding to its customer base and sales, Sea Limited's net loss accelerated to $524.6 million from $281.9 million in 2019.

However, many investors believe in the potential of Sea Limited's stock. Through equity offerings, the company's cash balance actually increased from $3.19 billion in 2019 to $6.17 billion in 2020. With a rapid expansion rate and solid capitalization, Sea Limited is still a worthy e-commerce stock. This year, the company expects it can continue its momentum by growing its revenue to $9 billion. For these reasons, I believe paying a premium of 25 times sales for the stock is well justified.

Fate Therapeutics is a leader in building the next generation of immunotherapies for cancer treatment. By mass cloning stem cells and differentiating them via genetic engineering, the company can create more than 200 types of therapeutic targets that correspond to various cancer types. It has more than 300 issued patents protecting its technology.

Thus far, it has eight immunotherapies are in phase 1/2 clinical testing. Thirty-five patients with lymphoma, acute myeloid leukemia, and solid tumors have received the company's biologics. In one cohort, three out of four cancer patients who failed between two and four courses of prior treatments saw their tumor's diameter shrink by 30% to 100% after being treated with Fate's therapeutics.

Although early on in its investigations, the efficacy is pretty astonishing. Investors who are interested in biotechnology should consider Fate a promising growth stock for this sector. Even though the company has no product, revenue, the payoff on its spectacular even if it manages to bring one of its immunotherapies to market. These days, large-cap biotechs can acquire smaller competitors that successfully develop just one immunotherapy drug for between $5 billion to $21 billion. So there's a lot of room to fly for Fate and its $7.7 billion market cap.

DocuSign is the world's No. 1 e-signature solutions company, with over 892,000 clients across various industries in over 180 countries. Over the past year, its revenue increased by 49% from 2019 to $1.5 billion. The company plays a huge role in simplifying paperwork, allowing customers to authorize contractual obligations instantly.

It should be no surprise that the company's clientele has been growing at a rate of 42% year over year since 2013. The service has a net retention rate of 123%, meaning revenue from existing users is piling up with each year that passes. DocuSign is also looking to expand its solutions to cover contract risk analysis, life cycle management, and online notarization as well. With its profits nearly quadrupling to $215 million last year, this is definitely one hot tech stock you don't want to miss.

It expects to take its sales further to $1.97 billion by the end of the year. A 28% growth rate seems a little low considering its stock is trading at 26 times revenue. However, I think the company may be a little pessimistic with its guidance, as the company's e-sign services have a lot of growth potential on the international level, and is highly scalable. I'd definitely grab some shares before its next earnings session around June.