Over the course of the past year, Americans have dealt with a seismic shift in their everyday lives, donning masks before leaving their homes -- or simply not leaving at all. The rising number of Americans who have received the vaccine inspire hope that the worst is behind us, but there seem to be plenty of challenges that remain.

With the unemployment rate hovering around 6% and the emergence and spread of COVID-19 variants, many people are concerned that a recession is on the horizon. Savvy investors recognize, however, that during a recession, smart investing moves can lay the foundation for impressive gains over the long term, so let's take a look at several stocks that can fortify portfolios during an economic downturn: American Water Works (NYSE:AWK), Brookfield Renewable (NYSE:BEP) (NYSE:BEPC), and Franco-Nevada (NYSE:FNV). 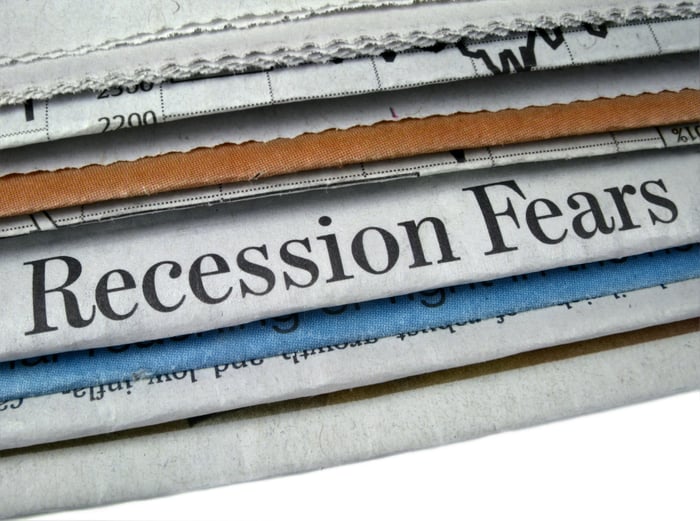 Investing in a water utility may not rival the excitement of a new SPAC announcing a merger, but when looking to gird your portfolio against a recession, a boring business can be the best choice. For this reason, American Water Works certainly warrants the attention of those worried about a recession. Since its founding in 1886, American Water Works has grown to be the largest publicly traded water and wastewater utility in the United States. While many Americans may curb their indulgence in extravagant drinks from Starbucks or pause their Netflix accounts to help make ends meet, there's little chance that they'll cancel their water and wastewater services.

Accounting for 3.5 million customers in 16 states, the regulated businesses segment makes up the lion's share of the company's operating revenue -- about 86% of the company's overall operating revenue in 2020. Because American Water Works relies primarily on its regulated businesses segment, management has good foresight into future cash flows and is able to plan accordingly for capital expenditures.

Consequently, it seems likely that even if the U.S. sinks into a recession, American Water Works would likely achieve its guidance of achieving an earnings per share (EPS) compound annual growth rate of 7% to 10% through 2025 from the $3.91 EPS that it reported in 2020.

Pivot to a power producer to protect your portfolio

If dipping your toes in a water utility investment doesn't pique your interest, perhaps you'd be more charged up about a renewable energy-focused powerhouse like Brookfield Renewable. The company has a global portfolio of green energy assets that represent 20 gigawatts (GW) of operating capacity. Hydroelectric accounts for the largest portion of the company's power generation capacity -- about 66%; wind and solar represent 28% and 11% of capacity, respectively. And that's not all. The company has 23 GW of projects in its development pipeline.

Similar to American Water Works, Brookfield Renewable would be well suited to weather a recession because of the nature of its business. Brookfield Renewable primarily keeps the lights on by entering into long-term power purchase agreements. According to the company's recent annual filing, for example, at the end of 2020, about 84% of its "generation (on a proportionate basis) was contracted over the following five years under long-term, fixed price contracts with creditworthy counterparties."

Unsure of just how prepared Brookfield Renewable is to handle a recession? Besides having an investment-grade credit rating of BBB+ from S&P Global Ratings, the company has $3.5 billion in available liquidity.

One of the most common strategies for protecting one's portfolio during a recession is to turn to gold. Recognized as a safe-harbor investment, investors will oftentimes turn to buying bullion as a bulwark against the volatility associated with an economic downturn. Instead of buying gold bars and coins, however, a better approach would be to pick up shares of a royalty and streaming company like Franco-Nevada.

While a stock's previous performance is no guarantee that it will perform in a similar manner in the future, it's certainly worth noting how Franco-Nevada has not only outperformed the S&P 500 over the past 10 years, but the price of gold as well. 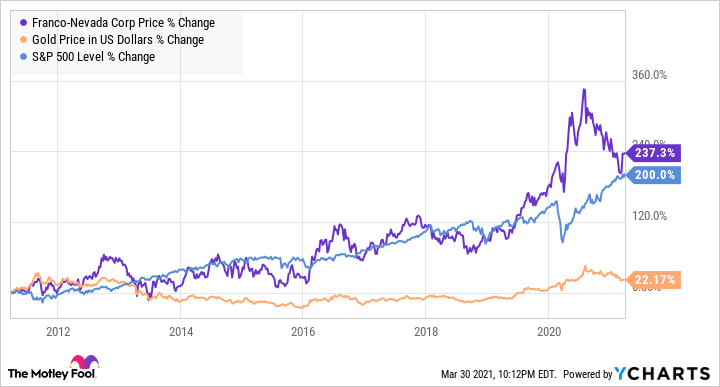 Clearly, investors who had simply stocked their safes with bullion would've only seen a 22% increase in the price of the yellow stuff; likewise, those who had invested in an S&P 500 index fund wouldn't also seen inferior returns to the 237% rise in Franco-Nevada's stock.

In terms of its financial position, the fact that Franco-Nevada has no debt on its balance sheet and $534 million in cash and cash equivalents at the end of fiscal 2020 suggests that the company's in sound financial health.

And with the recent dip in the price of gold bringing gold-oriented stocks lower, now seems like an advantageous time to pick up shares of Franco-Nevada. The stock is currently trading at 29.8 times operating cash flow, representing a discount to its five-year average multiple of 32.1 according to Morningstar.

Utility stocks like American Water Works and gold stocks like Franco-Nevada are some of the most conservative approaches investors can take when bracing for a recession. For those interested in taking the orthodox route -- and paying bargain bin prices while doing it -- Franco-Nevada seems like the obvious choice. For those willing to take on slightly more risk while gaining exposure to renewable energy, however, Brookfield Renewable is a viable opportunity.