Please ensure Javascript is enabled for purposes of website accessibility
Log In Help Join The Motley Fool
Free Article Join Over 1 Million Premium Members And Get More In-Depth Stock Guidance and Research
By Patrick Bafuma - Apr 3, 2021 at 6:12AM

These under-the-radar stocks have had incredible growth over the last 5 years, and are all off over 15% from their highs.

Cancer diagnostics has been a major growth sector over the last few years. Lucky for investors, three monster stocks have recently gone on sale. Let's look at these very different companies, each with their own unique twist, and see which one may have the best combination of growth and value for today's healthcare investor. 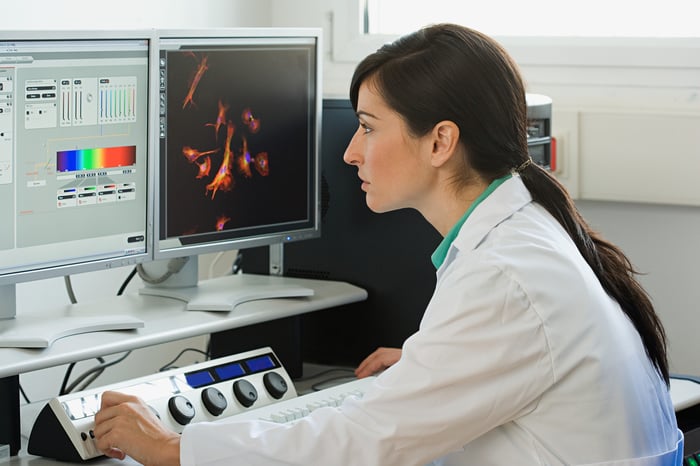 1. Veracyte: master of the undifferentiated

Veracyte (VCYT 5.01%) offers a suite of diagnostics to solve the dilemma of the inconclusive test. There are over 500,000 thyroid biopsies each year in the U.S., and up to 30% of those are inconclusive, meaning you cannot rule cancer in or out based on the results. This can lead not only to increased patient cost, frustration, and anxiety, but patients with inconclusive biopsies are often nudged toward surgery which often yields benign results (i.e., not cancerous) up to 80% of the time. Basically, the patient goes through an unnecessary surgery up to 80% of the time.

Now, using Veracyte's Afirma test on the sample obtained from the original biopsy, the company can identify up to 70% of patients whose biopsies were actually benign -- and thus avoid what would have likely been an unnecessary surgery. This is how Veracyte's tests aim to help patients avoid unnecessary invasive procedures. The company offers a similar test for lung nodules after bronchoscopy (where doctors look in the lungs with a camera), as well as for breast and prostate cancer.

All of this has rewarded investors, with the company going up nine times in value over the last five years. However, the recent market decline has discounted Veracyte about 40% from its 52-week highs, despite 16% revenue growth from fiscal year 2020 ending Dec. 31, 2020 over fiscal year 2019. The company is guiding for $190 million to $200 million in revenue -- 65% higher than in fiscal year 2021, which takes into account about 15% organic growth as well as revenue from a recent acquisition of Decipher Biosciences.

Not only has Veracyte continued to post steady growth over the years while chipping away at their $2 billion total addressable market in the U.S. (and $10 billion globally) across all their product lines (while maintaining margins in the mid-60% range), but the company also is developing a nasal swab to screen for lung cancer, which the company believes is a $5.5 billion addressable market globally and is on track for U.S. Food & Drug Administration (FDA) approval in the second half of 2021.

Up next is CareDx (CDNA 1.49%), a market leader in transplant diagnostics and surveillance of the health of a transplanted organ. This company, which only sports a $3.6 billion market cap, is the go-to company for transplant diagnostics, with greater than 70% of U.S. kidney transplant centers and more than 90% of U.S. heart transplant centers utilizing the company's testing diagnostics to screen and monitor the health of their patients. This market dominance has been recognized by Mr. Market, with CareDX going up more than 12 times in the past five years, but has taken over a 26% cut from its 52-week highs.

I think there is plenty more growth here, as the company recently put up 51% year-over-year revenue growth for fiscal year 2020 ending Dec. 31, 2020 to hit $190 million -- with 70% margins to boot. The company believes there is still plenty of addressable market left in the $12 billion total addressable market for organ transplants, and CareDx has also set their sights on the $5.5 billion stem cell transplant diagnostics market, having recently launched testing to determine if a patient's stem cell transplant is present and functioning (stem cell transplant being a treatment option for patients with certain types of cancer like multiple myeloma). I wouldn't be surprised if CareDx found a way to further develop testing for this market to grow larger than that $5.5 billion stated addressable market -- much like how the company expanded offerings to screenings to assess for risk of rejection and transplant injury.

Natera has dominated the reproductive health market, having run approximately a million tests in 2020 (up from about 800,000 in 2019), including a blood test that can be run early in pregnancy to evaluate for chromosomal abnormalities such as Down Syndrome.

It's not enough for Natera to control one market; it wants to move into transplant and oncology as well -- having developed a test to evaluate the likelihood of kidney transplant rejection, as well as blood tests to monitor the response to certain cancer treatments in late 2018. Unfortunately, the company does not break out sales between the two markets, but the combination of oncology and transplant testing produced $106 million in revenue in fourth quarter 2020, up from 43% from fourth quarter 2019. These two markets add up to an over $20 billion total addressable market -- clearly Natera only needs to win a little bit here to make investors happy.

While investors may want to do some spring cleaning, I think all three companies can provide continued growth as they are all leaders that have a proven ability to develop and grow a given market within their respective niches, and I suspect all three will continue to find ways to bring value to patients and clinicians, while also bringing growth to shareholders.

In the end, I favor CareDx. I'm concerned about Veracyte's nasal swab having serious uptake issues when blood tests are becoming ubiquitously available, and its growth rates are the lowest of the three. Natera comes in a close second, and while they do not need to claim a significant amount of the cancer diagnostic market, there is fierce competition with a lot of bigger companies vying for market share.

I like the focus of CareDx; it has the largest growth rates of the three, and has already shown an ability to land and expand a given market -- so I feel most comfortable with its ability to continue growing with their expansion into the stem cell market. At a 25% discount to its 52-week highs, I think CareDx is the safest of the three to continue its above average growth.