Please ensure Javascript is enabled for purposes of website accessibility
Log In Help Join The Motley Fool
Free Article Join Over 1 Million Premium Members And Get More In-Depth Stock Guidance and Research
By Nicholas Rossolillo, Anders Bylund, and Billy Duberstein - Apr 4, 2021 at 7:00AM

One bargain and two high-flying semiconductor manufacturers top this list.

March was a rough month for tech stocks, but there are plenty of buys out there after the sell-off. Some of those names in technology even pay a dividend -- and since tech is a growing industry, tech dividend payers are promising dividend payout increases over time. For the month of April, three Fool.com contributors think Amdocs (DOX 2.23%), Kulicke and Soffa Industries (KLIC 2.77%), and Taiwan Semiconductor Manufacturing (TSM 2.31%) are top dividend stocks right now.

Anders Bylund (Amdocs): Communications-oriented software and services specialist Amdocs can be found in Wall Street's bargain bin right now. The stock plunged 14% on Wednesday as a short-selling firm issued a scathing report on the company. Claims of outright accounting fraud from people with a negative financial interest in the stock should always be watched with a raised eyebrow, and this is no exception. I agree when well-respected analyst firm J.P. Morgan calls this situation a buying opportunity, driving share prices lower and effective dividend yields higher.

Here's the thing. It's not hard to make Amdocs look bad in a handcrafted report that highlights a few interesting events but doesn't give readers and investors the whole story. The company runs an incredibly complicated business model in order to cut down tax expenses and maximize its bottom-line returns. Pinch an unusual number here, put some spin on an accounting practice there, and you'll end up with a credible-looking fraud claim.

Founded in Israel and managed from Chesterfield, Missouri, Amdocs is registered in semi-British tax haven Guernsey for accounting purposes. Tax expenses stopped at $85 million in 2020, based on top-line revenue of $4.2 billion. Free cash flows are consistently higher than the tax-burdened net income. In the end, this company likes to pass its rising cash profits on to shareholders in the form of opportunistic buybacks and rising dividends. Quarterly payouts have nearly doubled in five years, and I expect the dividend boosts to continue: 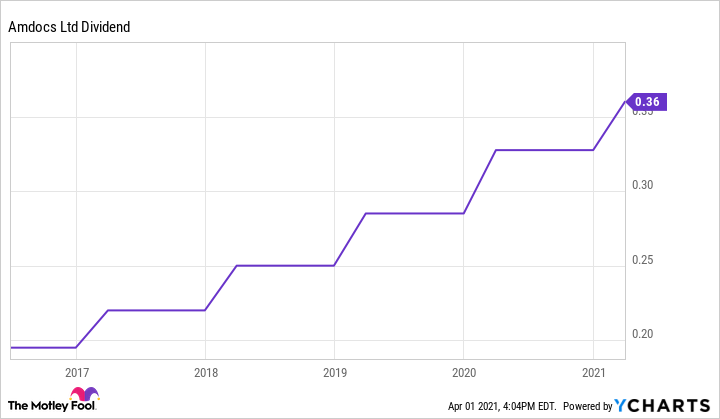 I think it's a mistake to frown too hard at accusations from the short-seller report. Amdocs' stock is trading 13% below the multi-year highs that were set last week, and the dividend yield is a meaty 2%. There's no need to back up the truck here but Amdocs looks like a useful addition to income-oriented portfolios at this deep discount.

This semiconductor equipment leader is taking off

With manufacturing constrained and demand soaring from accelerated digitization trends brought on by the pandemic, the semiconductor sector is in a shortage. Meanwhile, $50 billion of semiconductor investment is currently included in the newly unveiled American Jobs Plan, the new infrastructure bill put forth by the White House. That's an effort catch up to leading Taiwan-based chip foundry Taiwan Semiconductor Manufacturing, which just announced a $100 billion investment plan over three years. That announcement followed the $116 billion 10-year plan recently announced by Samsung (OTC: SSNLF), and the recent announcement by Intel (INTC 1.85%) that it will build a new $20 billion foundry in Arizona.

This intense global race for new and better chips all bodes well for Kulicke & Soffa, which makes machines for back-end assembly processes that connect semiconductors into multi-chip packages. Back-end assembly is becoming crucial as chip system designs become more complex, increasing capital intensity in bonding, lithography, and other processes into which Kulicke sells its machines.

Currently, Kulicke & Soffa's business is booming. Last quarter, revenue surged 85.6%, and adjusted (non-GAAP) earnings per share of $0.86 nearly tripled. Management also guided to sequential growth in the current quarter. Annualizing last quarter's EPS yields $3.44 in earnings, which may be somewhat conservative, given the strong current quarter guidance. At just over $51 today, Kulicke's stock only trades around 15 times that annualized earnings estimate. But K&S also has an excellent balance sheet, with over $9 per share of cash. Factoring that in, the stock's enterprise value-to-earnings ratio is only around 12.5.

Obviously, the market is skeptical this historically cyclical stock can maintain these high levels of earnings. But with the current chip shortage likely to last through the year, along with the huge multi-year investment plans going on in advanced semiconductors all over the world, it's possible the industry could have permanently higher levels of equipment spend. If that's the case, K&S is still far too cheap.

An epic confluence of events for the world's largest chip fab

Nicholas Rossolillo (Taiwan Semiconductor Manufacturing): It may not be a household name here in the states, but Taiwan Semiconductor has surpassed Intel as the world's largest chip manufacturer in recent years. The company claims an incredible 57% of the global chip fabrication market, hauling in $45.6 billion in sales over the last trailing 12 months.

As Billy mentioned above, TSM is investing heavily to expand its chipmaking capacity -- including building a new plant in Phoenix, Arizona. TSM has the most advanced manufacturing process around. Its 5 nm chip architecture (the smallest and most powerful computing semiconductors) is way ahead of the 7 nm chips of its rivals, and it's already working on even smaller 3 nm architecture to stay ahead of the pack. Besides benefiting from the global shortfall in tech hardware right now, TSM is setting itself up for years of dominance as it handles advanced silicon for everything from AI to 5G mobile networks.

Granted, TSM stock has more than doubled since the start of 2020 -- even after pulling back over 10% from all-time highs last month. But shares trade for a reasonable 36 times trailing-12-month earnings considering the company's growth profile. Management forecasted Q1 2021 revenue to increase at least 23% year over year, and for operating profit to increase a similar amount. Revenue and earnings should continue to rise throughout the year as TSM churns out parts to keep up with its customers' demand. And as for the dividend, TSM is committed to at least holding its quarterly payout steady and increasing it over time as its capacity increases. Currently, shares yield 1.4% a year.

If you're looking to bet on manufacturing, it's hard to go wrong with Taiwan Semiconductor. It's the global leader providing tech's basic building blocks, and isn't going to be unseated from that leadership position anytime soon. And with its manufacturing lines running at max capacity this year and the company investing heavily to grow the next few years, now looks like a timely opportunity to make a purchase for the long haul.