Please ensure Javascript is enabled for purposes of website accessibility
Log In Help Join The Motley Fool
Free Article Join Over 1 Million Premium Members And Get More In-Depth Stock Guidance and Research
By John Rosevear - Apr 5, 2021 at 11:00AM

Despite tight inventories, Ford moved a lot of trucks, SUVs, and electric vehicles in the first quarter.

Ford Motor Company (F 1.15%) said today that its U.S. retail sales jumped 23% in the first quarter from a year ago, as it scrambled to fill surging demand for its trucks, SUVs, and the new electric Mustang Mach-E amid a global shortage of semiconductors.

With its production still constrained by the chip shortage, Ford has been prioritizing higher-profit retail sales over deliveries to its fleet customers. Overall U.S. sales were up just 1% from a year ago, reflecting the production issues. 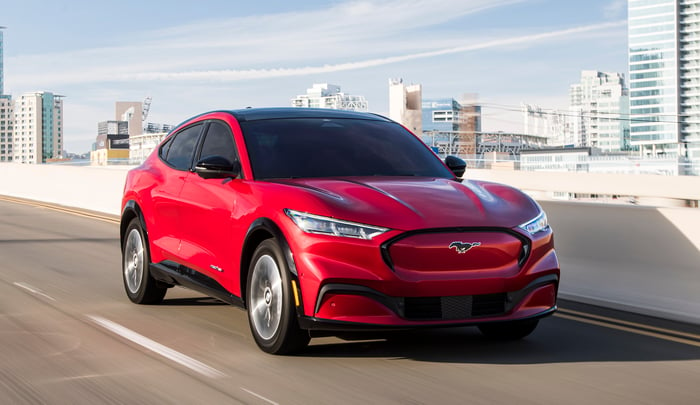 Of particular interest to auto investors, Ford's most profitable products were among its sales standouts in the quarter. Retail sales of F-Series pickups, powered by the all-new F-150 and a new hybrid variant, rose 23% from a year ago. Ford said that demand for the hybrid F-150s increased steadily through the quarter.

Overall F-Series sales, including fleet results, were up 9.2% in the quarter despite chip-related production disruptions at the two U.S. factories that build the F-150.

Sales of SUVs to retail customers also surged in the quarter, rising 37% on high demand for the new Bronco Sport and the electric Mustang Mach-E. Ford sold 6,614 Mach-Es in the quarter, with vehicles selling just 7 days after reaching dealers, on average -- exceptionally quick by industry standards. The larger Explorer was also a standout among the Blue Oval's SUVs, with overall sales (including both retail and fleet sales) up 15.9% from a year ago.

The results bode well for Ford's first-quarter earnings report, expected later this month. Wall Street analysts polled by Thomson Reuters expect the company to report a profit of $0.15 per share for the quarter, up from a loss of $0.23 per share in the first quarter of 2020.