Non-fungible tokens, or NFTs, play a key role in this next chapter of Topps' history.

Topps, one of the premier names in baseball cards, will soon be a publicly traded entity. The company will be folding itself into the special purpose acquisition company, or SPAC, currently called Mudrick Capital Acquisition Corporation II (MUDS 0.10%). Eventually though, it will trade as "Topps" using the ticker "TOPP."

Former Walt Disney (DIS 1.90%) CEO Michael Eisner is a key player in the transition. He co-purchased Topps with Madison Dearborn Partners LLC in 2007, and while he's exiting his stake now, he will remain chairman of the newly public company. GAMCO Investors and Wells Capital Management are key investors of Mudrick Capital Acquisition Corporation II, injecting much of the capital that will generate net proceeds of $571 million.

The deal values the Topps company at $1.3 billion, versus last year's revenue of $567 million. 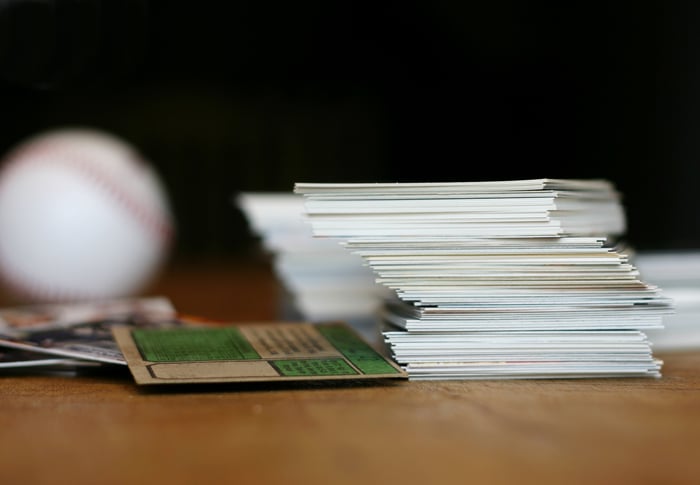 While known as a maker of professional sports memorabilia, Topps is much more. It also owns of Bazooka Joe bubble gum, maintains licensing partnerships, and even manages a suite of digital apps.

Perhaps its most exciting venture, however, is also its newest: non-fungible tokens, or NFTs.

Non-fungible tokens are encrypted identifiers linked to digital collectibles varying from images to audio files to videos including clips of sports action. Stored on blockchain, NFTs are meant to validate the rights of ownership to a particular digital asset and, ultimately, protect the monetization rights of those digital files. Mudrick Capital founder Jason Mudrick commented on the sports card company's non-fungible token potential by saying Topps is "well situated with a universally recognized brand to capitalize on the fast emerging market for collectible NFTs."

The process of going public through Mudrick's special purpose acquisition company should be completed by the early part of this year's third quarter.