Shares of the Lucid Motors owner pulled back on a broader rotation in the market.

Shares of Churchill Capital Corp IV (CCIV) were pulling back last month as investors rotated out of high-priced growth stocks like those in the electric vehicle (EV) sector and moved into value stocks and cyclical companies likely to do well in the recovery.

Churchill Capital, a special purpose acquisition company (SPAC) that acquired EV maker Lucid Motors in February, was one of those hard-hit growth stocks, and ended March down 25%, according to data from S&P Global Market Intelligence.

The chart below shows the stock's trajectory for the month. 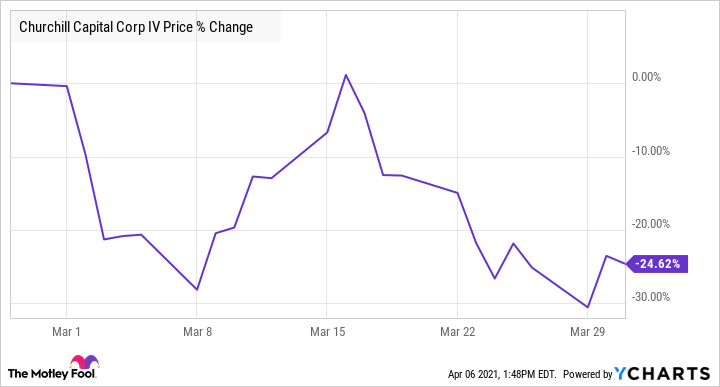 Churchill Capital shares plunged in February when the SPAC announced its merger with Lucid Motors, as it became clear that investors had bid CCIV shares to unreasonable levels, up more than 400% from a starting point of $10. The timing of the deal also came shortly after the Nasdaq peaked, and tech stocks and growth stocks began to pull back as interest rates rose.

That pattern accelerated in the first week of March as CCIV stock plunged 28% as the Nasdaq bottomed out and interest rates churned higher. Shares rebounded the following week, though there was no news out on the company, but the stock slumped again through the second half of March.

There was little news out on the stock over the month, but CCIV seemed to move in tandem with other EV makers, including Nio and Nikola, which finished March down 15% and 23%, respectively, a reflection that some of the air in the EV bubble may be starting to leak out.

Lucid Motors has yet to release a vehicle, and the company is targeting the second half of 2021 for its debut luxury sedan, the Lucid Air. The stock currently has an implied market cap around $40 billion, meaning high expectations are priced into the release -- though given the success of Tesla, the stock has plenty of upside if the EV market retains its current valuation.

Expect the stock to continue to be volatile as investors debate the prospects of an EV stock that is still in its development stages without a product on the market yet.