Please ensure Javascript is enabled for purposes of website accessibility
Log In Help Join The Motley Fool
Free Article Join Over 1 Million Premium Members And Get More In-Depth Stock Guidance and Research
By Harsh Chauhan - Apr 9, 2021 at 8:01AM

Micron Technology (MU 0.34%) stock has been on fire in 2021. Despite facing some volatility amid the sell-off in tech stocks, it has beaten the broader market's returns by a substantial margin, and the company's latest quarterly results make it clear why. 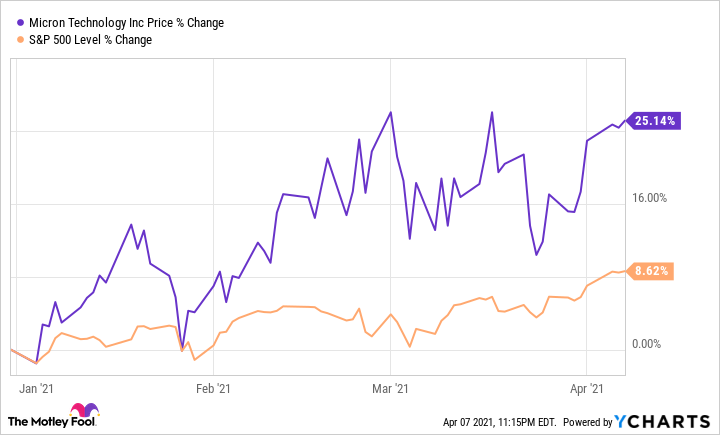 The memory specialist's fiscal second-quarter 2021 revenue and earnings exceeded Wall Street estimates and were at the higher end of Micron's guidance range. What's more, the company's Q3 forecast also crushed expectations and indicates that the company isn't going to run out of steam any time soon, making it an ideal bet for investors looking to buy a growth stock right now. Let's take a closer look at the reasons why Micron remains a solid buy even though its shares have more than doubled in the past year.

In its fiscal 2021 second quarter, which ended March 4, Micron Technology's revenue shot up 30% year over year to $6.24 billion, and adjusted earnings more than doubled to $0.98 per share from $0.45 per share in the year-ago quarter. The chipmaker enjoyed impressive margin growth as well, thanks to rising memory prices and cost declines. Its non-GAAP gross margin rose by 3.8 percentage points year over year to 32.9%.

All of those numbers were at the higher end of Micron's recently upgraded guidance ranges, which called for earnings between $0.93 per share and $0.98 per share on revenue between $6.20 billion and $6.25 billion. Its adjusted gross margin was expected to land between 32% and 33%.

The good news for Micron investors is that the company's margin growth is expected to accelerate. The chipmaker expects a non-GAAP gross margin of 41.5% this quarter, which would be a massive jump over the prior-year period's figure of 33.2%. In fact, Micron's gross margin performance could improve even further this fiscal year as the cost reductions in the DRAM (dynamic random access memory) business are expected to be higher than previously forecast.

At the same time, Micron management anticipates the supply and demand imbalance in the DRAM and NAND flash memory markets will worsen, allowing manufacturers to boost prices further. "As a result of the strong demand and limited supply, the DRAM market is currently facing a severe undersupply, which is causing DRAM prices to increase rapidly," says CEO Sanjay Mehrotra. "We see the DRAM market tightening further through the year."

The DRAM segment supplied 71% of Micron's revenue last quarter, so the favorable demand-supply dynamics in this market should be a tailwind for the company. More specifically, Micron expects DRAM bit demand growth of 20% in 2021, higher than its previous expectation of growth in the high teens.

NAND flash bit demand is expected to increase in the low-to-mid-30% range, exceeding the company's prior forecast of 30%. Micron says that NAND pricing is expected to remain stable in the near term, but efforts on the part of memory industry participants could lead to an improved pricing environment. That is the reason why Micron anticipates that its bit supply growth of both DRAM and NAND will be lower than the industry's supply growth in 2021.

The positive impact of all these tailwinds can be seen in Micron's guidance. The chipmaker expects $7.1 billion in revenue in the current quarter, a jump of more than 31% over the year-ago quarter. Throw in the huge margin gains, and it isn't surprising to see that the company expects its adjusted earnings to jump to $1.62 per share this quarter from $0.82 per share in the year-ago period.

The stage is set for Micron Technology to deliver strong top- and bottom-line growth in the near future, but there are reasons to believe that the company will enjoy a favorable demand and pricing environment over the longer term as well.

Micron's management is forecasting that DRAM bit demand will grow by percentages in the mid-to-high teens annually over the long run. NAND bit demand is expected to increase at a compound annual rate of around 30% over the long run. The rising demand for memory chips to be used in data centers, smartphones, personal computers, graphics processors, and vehicles is expected to drive that impressive long-range growth.

The huge increase in demand hasn't prompted the participants to increase their capital expenses by big margins. Micron, for instance, has outlined $9 billion in capital expenses for fiscal 2021, an increase of just 13% over the prior year that pales in comparison to the huge growth anticipated in bit demand.

In the end, it can be said that Micron Technology looks primed for multi-year growth as favorable memory market conditions look set to prevail. All of this makes Micron an ideal bet for investors looking to buy growth stocks to hold for the long haul, especially considering that it trades at a reasonable 18 times forward earnings despite its rapid growth rate.