Please ensure Javascript is enabled for purposes of website accessibility
Log In Help Join The Motley Fool
Free Article Join Over 1 Million Premium Members And Get More In-Depth Stock Guidance and Research
By Billy Duberstein - Apr 12, 2021 at 7:00AM

Think the stay-at-home tech growth trade is over? Think again.

With the accelerated rollouts of COVID-19 vaccines, you may think the stay-at-home trade is over, and the "reopening" stocks are the ones to buy today. But is that really true?

Don't look now, but after a rough start to the year, stay-at-home technology stocks surged last week and have been generally beating the market since mid-March. In fact, the tech-heavy Invesco QQQ Trust (QQQ 0.81%), which mirrors the Nasdaq 100, is now ahead of the more cyclical and value-oriented small-cap index the iShares Russell 2000 ETF (IWM 0.35%), not only for the week, but also over the past month. That's a reversal of the trend from January and February. 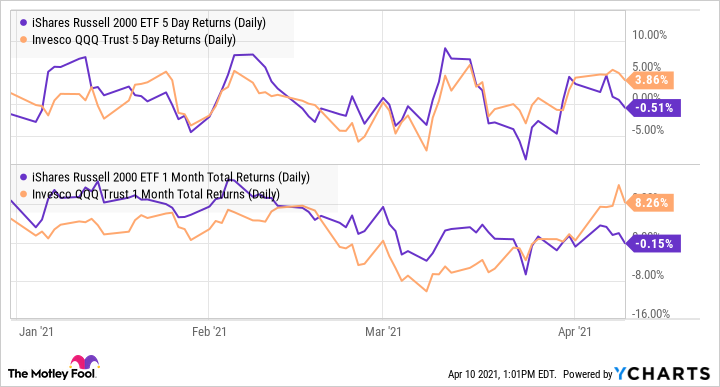 Here's why investors may be counterintuitively looking to e-commerce, software, security, and other stay-at-home stocks these days, even as the economy is on the cusp of reopening -- and why the rotation back to large-cap growth stocks could continue. 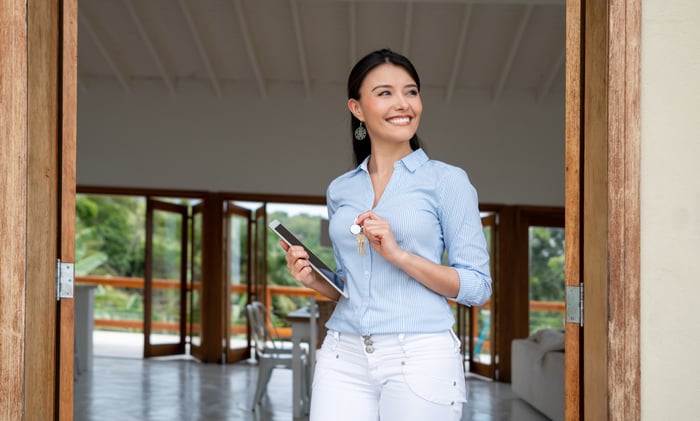 The 10-year yield may have topped out

One of the reasons low-priced value and cyclical stocks surged in the first quarter, while "expensive" growth stocks fell or remained subdued, was a rapid rise in the 10-year Treasury Yield. The 10-year is a benchmark against which banks price many products, and which investors use as a baseline for their discount rates used in measuring the intrinsic value of a stock. Basically, the higher long-term rates are, the less future are earnings are worth relative to today.

However, the 10-year yield has recently put in a top -- at least in the near term. After increasing in January, February, and then March, the yield on the 10-year has stalled out and actually dipped in the early part of April. 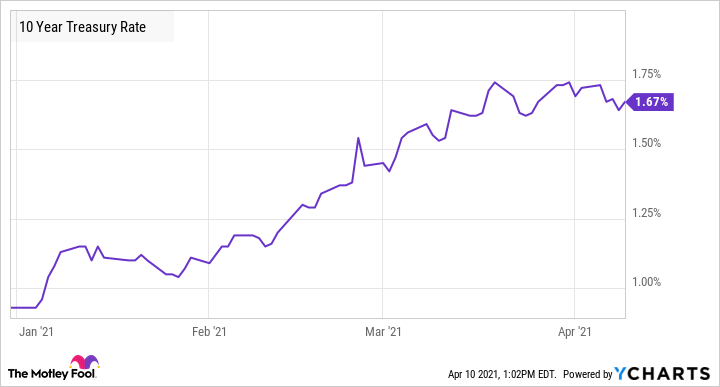 Now, it's hard to say where rates will go from here. After all, the 10-year yield is still a little bit below where it was just before the pandemic. Assuming the COVID-19 relief bill overstimulates the economy, and/or President Biden's infrastructure bill is passed, rates could still go higher.

Nevertheless, there were valid reasons for the low rates seen before the crisis, including demographic headwinds, technological disruption, and bond-buying from the Federal Reserve. Should rates stall out here, the growth stocks that were doing so well before and during the early part of the pandemic could regain their momentum.

The market is forward-looking

The economy is just on the cusp of reopening, which should benefit cyclical and "out-of-home" stocks. The only problem? The market already knows this. Starting with the news of successful COVID vaccines in November, and then accelerating with falling COVID cases starting around February, investors have likely extrapolated a full economic reopening by now.

In fact, investors may have anticipated not only a reopening, but an economic boom. For instance, all the major cruise line stocks have risen recently, with most analysts pricing these companies off of their 2023 earnings estimates (the soonest "normal" year). Currently, analysts predict 2023 operating earnings will be higher than 2019 (though EPS will be lower, because of higher interest payments from more debt, and more shares from dilution taken in 2020).

And the cruise lines are just one example. Many online travel agents, casinos, and other reopening plays have all recovered or exceeded pre-COVID levels, even with low current earnings, higher debt burdens, and higher shares outstanding.

With beaten-down reopening plays having rebounded strongly over the past six months, it's quite possible these stocks are pricing in as much good news as investors are willing to give them. That leaves high-growth tech stocks, which have either flatlined or even corrected a bit, as more attractive alternatives.

After all, interest rates are still historically low, and although digital companies got a big boost during the pandemic, most were riding secular long-term tailwinds that would occur anyway, with or without COVID. And of course, the pandemic also could have changed some habits permanently, such as the use of e-commerce and home fitness.

New variants are worrisome for humanity, a potential boon for tech

Finally, another factor that could boost the fortunes of stay-at-home tech stocks, at least relative to reopening stocks, is the emergence of new COVID variants. Currently, the U.S. has seen several new variants emerge from overseas, including the U.K., South Africa, and Brazil, along with two other variants that appeared to emerge in California. Just last week, the CDC declared the more contagious and more virulent U.K. variant as the new dominant strain in the United States.

While current vaccines on the market appear to be effective against these new variants, other new variants could emerge this year that may be better able to thwart current vaccine antibodies. Although the U.S. is on track to vaccinate three-fourths of the population by June, there is still a significant number of people who don't intend to take the vaccine.

In addition, the rest of the world, especially emerging markets, remains far behind the progress of the United States. It's estimated that only 28% of emerging markets will be vaccinated by the end of the year.

If a new vaccine-resistant variant emerges from overseas and gains a foothold in the U.S., it could lead to serious problems. It's not out of the realm of possibility that we could have more lockdowns if that happens later in the year. And as we've learned, that could boost digitally oriented stay-at-home tech stocks.

The possibility of outcomes is wide

It has been the common wisdom that the economy will boom upon reopening on the back of fiscal and monetary stimulus, a glut of savings, and pent-up demand. That could very well happen. But it also might not, especially if new COVID variants take hold.

With the consensus now fully behind the reopening and value stocks and many such stocks now trading back to, or even exceeding, pre-COVID levels, investors are now refocusing on long-term growth trends and industries once again. That means stay-at-home e-commerce, software, cyber stocks, and others like them could be in for a much stronger second quarter. It appears as if this reversal has already started.

Basically, it's time to look at stocks in a "normal" operating environment again based on long-term potential, as the reopening catalyst may already be factored into many stocks today.