Please ensure Javascript is enabled for purposes of website accessibility
Log In Help Join The Motley Fool
Free Article Join Over 1 Million Premium Members And Get More In-Depth Stock Guidance and Research
By Jason Hawthorne - Updated Apr 13, 2021 at 10:53AM

Government stimulus can't hold off reality for these borrowers forever.

With the unemployment rate at 6%, the lowest level since before the pandemic, and the Institute for Supply Management's manufacturing gauge hitting its highest reading since 1983, the economy is definitely gaining strength. Nevertheless, underneath the strong economic numbers are a few data points that could spell trouble for one group.

By the end of the summer in 2007, long before Americans knew the great financial crisis was beginning, default rates for subprime mortgages spiked. Lenders may have seen the writing on the wall, because the total volume of subprime loans also dropped.

A similar story is currently playing out in auto lending. While the industry doesn't influence the economy nearly as much as housing, the numbers should get the attention of investors in Capital One Financial (COF 2.52%), Ally Financial (ALLY 2.06%), and Credit Acceptance Corp. (CACC 4.71%). If the yellow flag turns red, it could dent the stocks and stall any share price appreciation over the next few years. 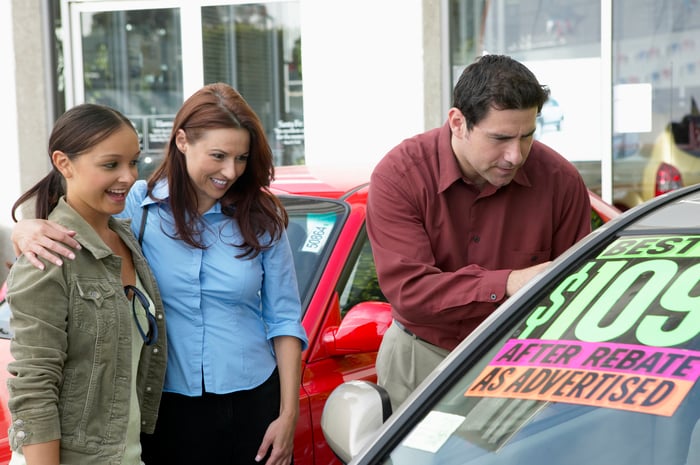 Breakdown of the consumer debt market

It's important to preface any discussion of economic drivers with some facts. First, the U.S. economy is the largest in the world. The country's gross domestic product was $21 trillion last year. Consumer spending accounts for about 70% of that total. When those consumers have debt, it makes it harder for them to spend, and one significant category of consumer debt is auto loans.

Counterintuitively, consumers will typically stop paying their mortgages and credit cards before they ever skip a car payment. That's because most need their car to get to work. It's also much easier to repossess an automobile than foreclose on a house. So when borrowers start defaulting on car loans, it can be a sign that trouble is ahead.

That's why it's worrisome that despite the government's moratorium on student loans and evictions, 10.9% of subprime auto loans were more than 60 days delinquent in February. That's up from 8.7% in February 2020 and 4.6% when the number bottomed in 2012. On top of the escalating default rate, TransUnion reported a year-over-year decline in auto lending in the fourth quarter of 2020. That was the same combination that served as a prelude to the subprime housing issue.

Not necessarily the canary in the coal mine

Of course, there are a few reasonable explanations for the numbers. First, we're in a pandemic. Sure, more purchases and financing are moving online to platforms like TrueCar and Carvana, but fewer loans could simply be the result of fewer people on the car lot. Lenders have also gone out of their way to help struggling borrowers, and some of those programs could be ending.

On its fourth-quarter earnings call, Capital One said its assistance programs had a positive, albeit temporary, impact on defaults. To date, the company has assisted 19% of outstanding auto loans, but only about a third of those loans go to subprime borrowers. The percentage of its borrowers from the lowest credit category actually increased in 2020 despite the average credit score for Americans going up last year.

Other lenders have taken a more conservative approach with the riskiest cohort of borrowers.

For Ally Financial, what it calls non-prime loans made up 9% of auto lending in its fourth quarter, ending in December. That was significantly less than the 12% from the same period of 2019. The increase in credit quality of the average borrower didn't hurt volume, which was flat year over year. On the most recent earnings call, CFO Jennifer LaClair said the company is planning for retail auto charge-offs -- debt the company doesn't think it will collect -- to average 4% later this year, more than double the 1.3% to 1.6% it historically experiences. That's significant considering the company is the market leader, with 7.7% of all U.S. auto loans.

When it comes to subprime auto loans, Credit Acceptance Corp. is a straightforward way to invest. The company offers financing programs that allow consumers to purchase vehicles regardless of their credit history. In fact, 95% of the loans made in 2020 were to borrowers with FICO scores below 650. Like Ally, the company seems to be getting more careful. In a February earnings call, CEO Brett Roberts explained that the company lost market share because others were willing to be more aggressive than Credit Acceptance. He also highlighted data showing subprime borrowers had curbed auto purchases in the fourth quarter of last year. One thing is certain: Government stimulus will delay any reckoning in the market. The company reported that collections for January were up 16% year over year thanks to the program signed into law at the end of December. That was even before the latest payouts from Uncle Sam in March.

No certainty in a probabilistic world

The economy is complex, and dozens of indicators can point in different directions at the same time. That said, subprime mortgage defaults and declining loan volume were early signs of trouble in the great financial crisis. Although auto loans aren't responsible for nearly the same amount of consumer debt as mortgages, the same scenario is playing out.

Shareholders of Capital One, Ally Financial, and Credit Acceptance Corporation don't need to panic, but the numbers and executive comments should be a yellow flag. Crises are typically not neatly packaged with the same metrics as the last calamity, and even if one comes, the stocks might not react the way most would expect. For now, shareholders should monitor the numbers and listen for a sense of urgency when executives speak about credit quality and each company's exposure. A safer way to invest in the economic rebound might be to find consumer lenders with little exposure to subprime auto lending.