Please ensure Javascript is enabled for purposes of website accessibility
Log In Help Join The Motley Fool
Free Article Join Over 1 Million Premium Members And Get More In-Depth Stock Guidance and Research
By David Jagielski - Updated Apr 14, 2021 at 10:31AM

After missing last year's deadline, lawmakers in New York didn't want to make the same mistake in 2021 and legalized pot in March.

The big news in the cannabis industry this year is that New York has legalized marijuana for recreational use, making it the 15th state to do so. It likely won't be until sometime next year that recreational sales commence, but for investors, it's not too early to start thinking about which companies will capitalize on what's sure to be the next hot market for the industry.

There will likely be a surge in companies looking to make moves in New York in the coming months. However, three stocks that already have a presence in the state and that could be among the big winners from this news are Cresco Labs (CRLBF 4.20%), Green Thumb Industries (GTBIF -0.38%), and Columbia Care (CCHWF 4.12%). And now may be a great time to invest in them. 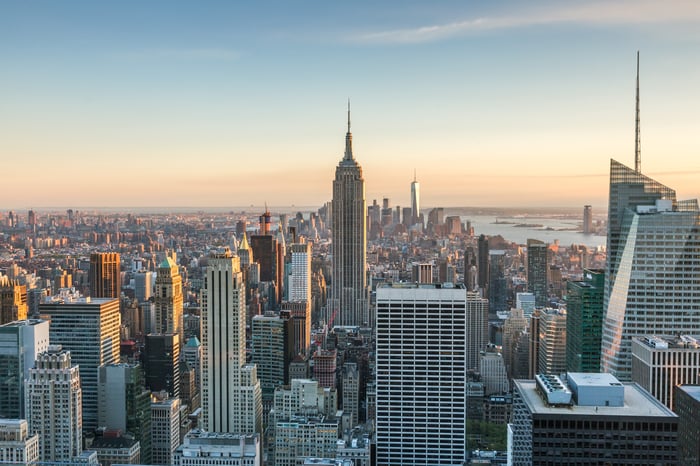 Multistate cannabis producer Cresco Labs is in great shape to take advantage of the New York market. The company has four Sunnyside retail locations already set up and operating there. But investors should look for more moves from Cresco. In a recent press release, CEO Charlie Bachtell said that "we look forward to deepening our position in the state ahead of adult-use sales commencing."

Cresco Labs is an appealing investment, because unlike some larger multistate operators, the company isn't overly aggressive in its expansion. In six of the nine markets that the company is in, their annualized run rates are at more than $1 billion. By picking its spots carefully, Cresco can not only generate strong sales numbers, but record a healthy bottom line while doing so. In 2020, its sales of $476.3 million grew 271% year over year. And its adjusted EBITDA of $116 million represented more than 24% of its top line.

Investors should watch for Cresco Labs as it may try to secure some key positions in the state before recreational sales begin. The opportunity for that, coupled with strong financials, makes this a solid pot stock to add to your portfolio.

In addition to New York, Green Thumb has a presence in neighboring New Jersey, which legalized marijuana earlier this year. It has two stores in the Garden State, and in New York, it three locations under the FP Wellness brand (a fourth is on the way), including one in Manhattan. For more aggressive investors, Green Thumb is an attractive option as on March 31 it opened its 56th Rise retail location in the country. That's one-third more since launching its 42nd retail location a year ago.

Like Cresco Labs, Green Thumb has also been delivering impressive earnings results. Its 2020 sales of $556.6 million grew by 157% while its adjusted operating EBITDA of $179.6 million was more than six times the $27.8 million it reported in the previous year. And at 32%, this was also a high percentage of its total revenue.

But given its relatively small presence in New Jersey and New York (in Pennsylvania, for instance, it has eight Rise locations), Green Thumb is just scratching the surface in terms of potential growth opportunities in the near future. And with an aggressive growth strategy, it wouldn't be surprising to see a lot more expansion in these markets soon. If that happens, Green Thumb could prove to be one of the hottest pot stocks to buy.

New York-based Columbia Care is another cannabis company that should do well in its home state. With four locations there (plus one in New Jersey), its business is already in good shape to meet the needs of these new pot markets. And for investors worried about the pandemic, Columbia Care has adapted well to changing trends. It now offers home delivery in many New York counties. The company's Virtual Care experience also makes it easy for people to shop online. And that isn't just by browsing products: Customers can interact with Columbia Care's team and feel like they are inside the store. Patients can also connect with a doctor. It's the latest from a company that has been one of the more innovating ones in the industry; in 2019 it launched a credit card that can be used at its dispensaries.

In 2020, the company's sales totaled $197.9 million and increased by 151% from the previous year. It is the only company on this list that didn't record a positive adjusted EBITDA for the year. But with a relatively narrow loss of $4.1 million (just 2% of its revenue), it didn't miss by much. And with more growth opportunities ahead, 2021 could be a fantastic year for the company. Columbia Care has a presence in 17 markets, including Arizona and Virginia, which are two other states that recently legalized marijuana. However, in the latter state's case, sales will not start until 2024.

Nonetheless, Columbia Care is positioning itself for some solid growth prospects over the long term. And with a flexible shopping experience for its customers, this is another pot stock that could do great things in New York and other new markets.