Names involved in hydrogen and other segments of alternative energy are dropping today.

Shares of many renewable energy stocks have been declining on Thursday. Included in that are companies hoping hydrogen becomes an important source of energy for the transportation sector in the future. As of 3 p.m. EDT, shares of Nikola (NKLA -0.84%), FuelCell Energy (FCEL 0.80%), and Bloom Energy (BE 2.30%) were down 8%, 12%, and 4%, respectively.

Stocks in the business of hydrogen fuel are not the only ones dropping as a group today. Those related to other alternative energy solutions and electric vehicles also are on a downtrend. There is no company-specific news from any of these three hydrogen fuel-related companies today, but they each have a lot at stake regarding the future of hydrogen fuel cell technologies. 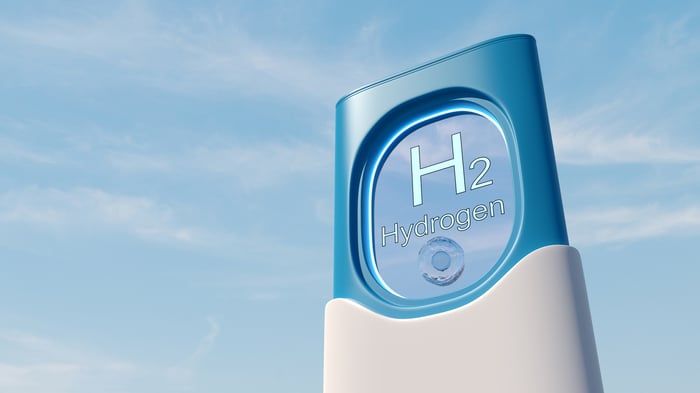 Yesterday, Nikola announced it was planning to form a partnership with European pipeline network company OGE and IVECO, a brand of CNH Industrial (CNHI 0.60%), to support the distribution of hydrogen in Germany. The companies plan to provide production and storage solutions along with fueling locations to serve industrial needs. Besides IVECO, other CNH Industrial brands include the New Holland and Case brands of agriculture and construction vehicles.

FuelCell Energy and Bloom Energy have also joined in supporting the development of hydrogen fueling. Last month, FuelCell Energy announced it joined Hydrogen Europe, a leading European group of large companies creating a community working to significantly advance and accelerate the hydrogen economy. Jason Few, FuelCell president and CEO said in a statement, "We, at FuelCell Energy, have set our sights on becoming a leading global player in the distributed hydrogen production market."

Similarly, Bloom Energy has expressed its support for growing the renewable energy alternative in the U.S. with its participation in Hydrogen Forward, an initiative focused on advancing hydrogen development domestically. That group is a coalition of 11 companies including industrial gas suppliers, auto and industrial truck makers, energy companies, and others that believe supporting the advancement of hydrogen technologies will benefit both the economy and the environment. The group believes that hydrogen is key to help reduce carbon emissions from various sectors, "including shipping and transportation, power generation, refining, steelmaking, chemical production, mining, manufacturing, and other industries."

Investors in this sector know that it's a longer-term story to begin with. One day or even an extended downturn when the market is rotating away from these more speculative names shouldn't change an investing thesis.