Please ensure Javascript is enabled for purposes of website accessibility
Log In Help Join The Motley Fool
Free Article Join Over 1 Million Premium Members And Get More In-Depth Stock Guidance and Research
By Billy Duberstein - Apr 16, 2021 at 8:06AM

Get ready for a frenzy of acquisitions in the red-hot U.S. cannabis market.

U.S. cannabis multistate operator Trulieve Cannabis (TCNNF -0.21%) has firmly established itself as the most profitable cannabis operator in the country, thanks to its dominant market share in Florida. Last year, Trulieve grew revenues 106%, while making fat gross margins of 74% and adjusted earnings before interest, taxes, depreciation, and amortization (EBITDA) margins just over 48%. And despite the hugely punitive tax burdens on all cannabis producers, Trulieve even made $63 million in GAAP net income.

Trulieve has a solid balance sheet. Cash and equivalents totaled $146.7 million as of December 31, against $130 million in long-term debt. However, the company also has an additional $139 million of notes payable, finance lease liabilities, and construction-finance liabilities, although those may be backed by specific assets. There's also another $29.6 million in operating lease liabilities, if one chooses to count that as debt.

Trulieve has a high-profit business model and solid balance sheet, so it may be a surprise that it just raised a lot of money through a new equity issuance. Here's why it could signal a huge amount of growth and acquisition activity for the company in 2021. 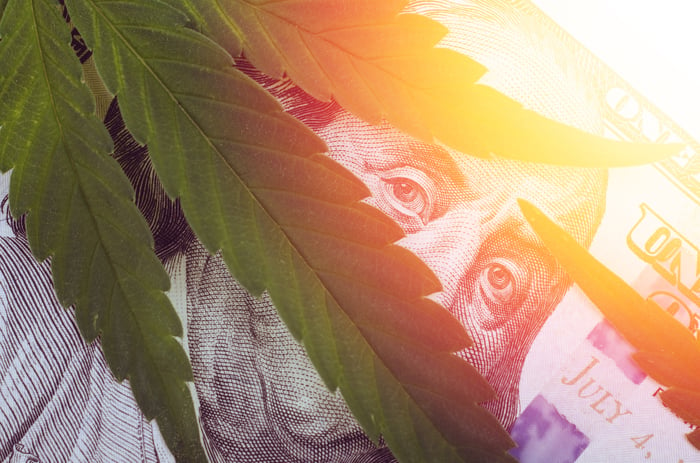 On April 12, Trulieve closed on a 5 million share offering at 50 Canadian dollars ($39.63 U.S.) per share. Additionally, underwriters of the deal bought their full allotment option of an additional 750,000 shares. That's a pretty good sign of confidence. After underwriting discounts and commissions, Trulieve brought in $227.9 million from the sale.

While Trulieve did sell stock that's down about 20% from its all-time highs, the stock is still up 31% on the year and a whopping 341% over the past 12 months. 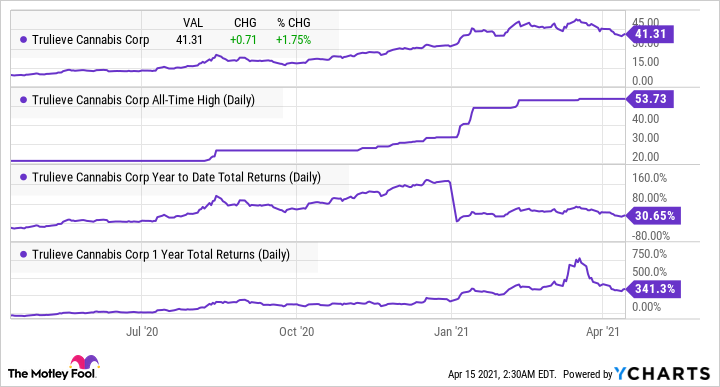 What will Trulieve use its millions for?

Trulieve just announced two new acquisitions around the time of the stock sale, but these were relatively small, compared to the amount raised.

On April 5, the company announced the acquisition of Keystone shops, which has three dispensaries in the densely populated Philadelphia area. That follows last year's purchases of dispensary-owner Solevo and cultivator PurePenn.

Solevo's three dispensaries are located in the Pittsburgh area, so the new Keystone acquisition will give Trulieve footholds in both of Pennsylvania's major cities. Pennsylvania is an attractive market with similar characteristics to Florida, which is currently medical-only and with limited licenses. 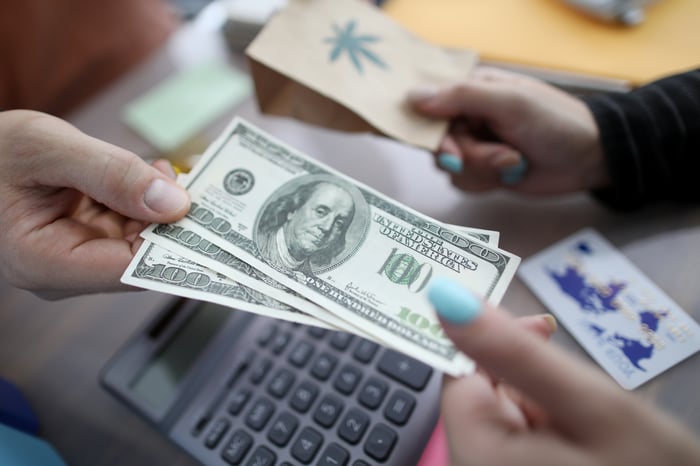 Those are very small cash outlays when compared to the massive $228 million just raised by the company. So what's Trulieve thinking?

Even though Trulieve is among the most profitable companies in the cannabis industry, it's still not generating meaningful free cash flow. After paying 60% of pre-tax income out as taxes, the company spent all of its remaining $100 million in operating cash flow on capital expenditures (capex) last year, with another $41 million to construction-financed expenditures and $30 million on acquisitions. As the cannabis industry consolidates, acquisitions are probably going to be a regular occurrence, so they should be thought of as extra growth capex, as well.

Of course, much of that capital expenditure can be chalked up to investments in growth, as depreciation was only about $24 million. If Trulieve weren't growing, it would likely be cash flow positive. But Trulieve is growing fast, opening 28 Florida dispensaries last year and increasing its count in the state by more than 50%, while also expanding into Pennsylvania. 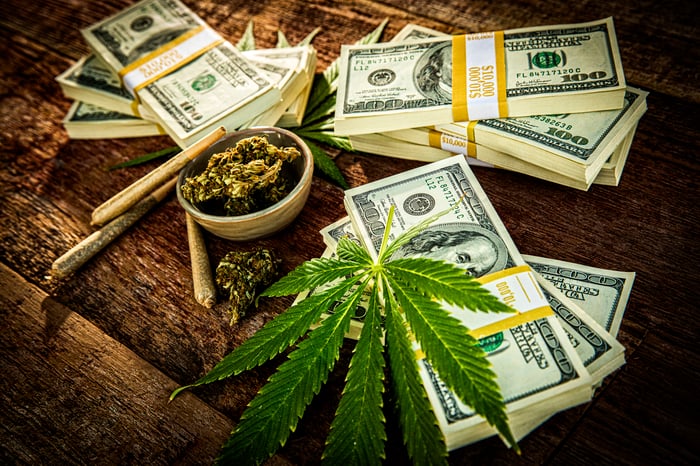 Trulieve continues to open dispensaries in Florida at a furious pace, having already rolled out nine in 2021. West Virginia operations have gone from zero to nine dispensary permits in a matter of months, and the company is planning big expansions for its Pennsylvania and Massachusetts cultivation operations this year, as well. That's all going to take a lot of capital, but Trulieve could probably handle those expansions if it continues its torrid pace of growth and high margins.

Nevertheless, an even more aggressive expansion could be in the offing, with a flurry of states legalizing cannabis since last November. Arizona, New Jersey, Montana, South Dakota, and Mississippi all voted to legalize cannabis via ballot measure in the November elections (Mississippi for medical use only), while New York, New Mexico, and Virginia have all passed cannabis legalization measures through their state legislatures in 2021. Trulieve doesn't have a presence in any of those states yet.

With so much legalization happening all at once, well-funded cannabis companies have many options for growth, either organically or via acquisition. So even though Trulieve is generating more cash than its competitors, it may still have more growth opportunities than it has cash.

While it's unfortunate that shareholders are getting diluted, Trulieve's stock trades for about 20 times trailing EBITDA. Considering that cannabis companies still must borrow at double-digit interest rates due to cannabis being illegal at the federal level, Trulieve's stock may now be the lowest-cost capital available.

With the industry growing at a furious pace, I'm guessing management sees an opportunity to become a truly nationwide -- or at least east coast leader in short order, rather than just the dominant player in Florida. I'd be looking for a lot more expansion initiatives from Trulieve throughout 2021, with a large-scale acquisition of another publicly traded MSO a distinct possibility.