Please ensure Javascript is enabled for purposes of website accessibility
Log In Help Join The Motley Fool
Free Article Join Over 1 Million Premium Members And Get More In-Depth Stock Guidance and Research
By Jim Halley - Apr 17, 2021 at 6:33AM

Horizon Therapeutics's shares are up almost 200% over the past 12 months, buoyed by mind-boggling sales of its new blockbuster drug.

Horizon Therapeutics (HZNP 1.35%) has seen explosive revenue growth this year, and with it, the company's stock has risen from $30.40 two years ago to more than $90 today. In the fourth quarter, the company reported revenue of $745.3 million, an increase of 105% year over year and a 17% increase over the $636.4 million of revenue reported in the third quarter. The company specializes in therapies for rare, autoimmune, and severe inflammatory diseases. Its lead drug, Tepezza, for thyroid eye disease (TED), earned $820 million in revenue last year, its first on the market.

Here are three reasons to add Horizon to your portfolio, and one not to. 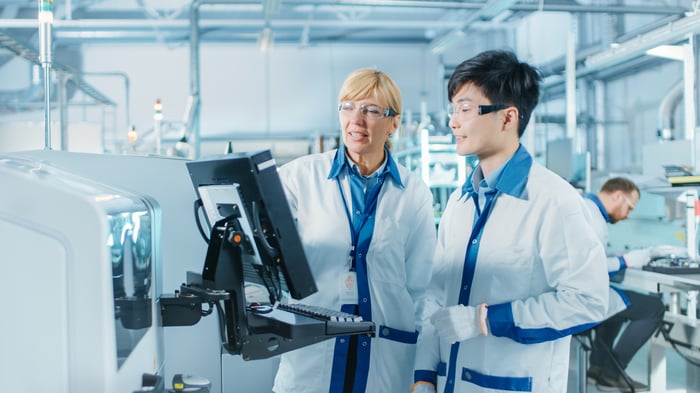 A pipeline that's about to pop

Horizon Therapeutics has 14 programs in its pipeline, led by expanded label usages for its biggest sellers: Tepezza and gout therapy Krystexxa. Both drugs enjoyed double-digit sales growth in the fourth quarter, with Krystexxa up 33% and Tepezza up 19.7% over the third quarter. That doesn't even include what Viela Bio (VIE) is bringing in, with four therapies in nine development programs. Horizon completed its $3.05 billion deal to purchase Viela in March.

The $820 million Tepezza brought in last year was just the start. The drug is delivered intravenously, but Horizon's is working with Halozyme (HALO 1.09%) on administering a version of the drug that could be dosed via subcutaneous injection. This would make it an easier, more accessible, sell.

Earlier this year, the company's production of the drug was halted as Horizon's manufacturer for the drug, Catalent (CTLT -0.25%), was forced, because of Operation Warp Speed, to focus on manufacturing COVID-19 vaccines. Production of Tepezza is back on track now, though. The company says the drug should bring in more than $1.275 billion this year and could eventually bring in as much as $3.5 billion a year as its label expands.

Horizon CEO Tim Walbert said the company not only likes Viela's biologics pipeline, but its staff's experience in research and clinical development. The revenue coming in from Tepezza and Krystexxa makes it easier to be patient while funding more research and development.

Horizon had forecasted that adjusted EBITDA for 2021 would be between $1.14 billion and $1.18 billion, but added that that number would be reduced by $140 million by the Viela deal. Even with the expenses associated with the purchase, the company looks to grow adjusted EBITDA this year.

However, if you look at Horizon's forward P/E of 25.74, it is lower than the industry average of 34.05. But those are based on estimated future earnings -- the company's current price could keep many investors away.

Horizon is profitable and has increased revenue 189.6% over the past five years. It's not too late to get in on future stock gains, but it makes sense to wait for a dip in the stock's price, particularly if it again falls below $85 a share.

Does 2021's Best Biopharma to Work for Belong in Your Portfolio?