Please ensure Javascript is enabled for purposes of website accessibility
Log In Help Join The Motley Fool
Free Article Join Over 1 Million Premium Members And Get More In-Depth Stock Guidance and Research
By Rick Munarriz - Apr 17, 2021 at 7:05AM

I feel the need, the need for speed. These stocks are picking up the pace on their top lines.

Growth stocks historically slow over time, so it's always exciting when you see companies going the other way. Find a promising company that is growing faster than it was before and good things typically happne.

HubSpot (HUBS 4.32%), fuboTV (FUBO 0.00%), and Corsair Gaming (CRSR 0.61%) are three stocks that are stepping on the accelerator these days. Let's see why you can race to the finish line with stocks that are flooring it right now. 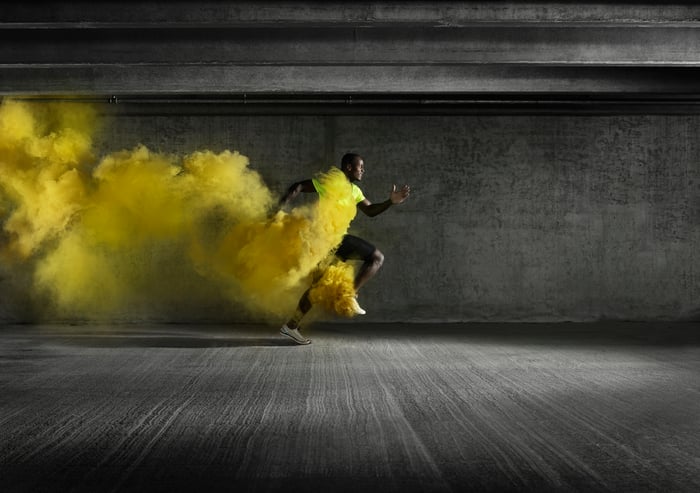 HubSpot went public in late 2014 as a provider of cloud-based inbound marketing services. Revenue inched higher in 2015. It's been all downhill after that. Here's how annual top-line growth has clocked in for HubSpot in through its first six years as a public company.

Something interesting started to happen halfway through 2020. Revenue rose 24.7% in the second quarter, followed by 31.5% and then 35.4% top-line increased in subsequent reports. HubSpot's revenue growth in its latest quarter is actually its largest burst in nearly three years.

It's not a fluke. HubSpot's guidance calls for 31% to 33% growth for all of 2021. Even at the low end it will end HubSpot's streak of decelerating growth, and this is a cloud tech leader that has historically been conservative with its crystal ball peeks. Late last year it was eyeing just 26% to 27% in revenue growth for the fourth quarter that it would go on to crush with a better than 35% pop.

The market has a problem warming up to fuboTV. The live TV streaming service is doing some pretty neat things to stand out in an otherwise cutthroat niche. It's been acquiring fantasy sports and gambling companies to cash in on its "sports first" audience. Its subscriber base widened by 73% in 2020. It's generating a stunning $8.47 a month in ad revenue per member, and that's on top of the premium subscriptions for the service. In an interesting content grab fuboTV recently acquired exclusive live streaming rights to some World Cup qualifying matches.

Despite all of the positives, fuboTV shares have surrendered more than two thirds of their peak value. A lack of profitability, an expected seasonal dip in subscribers, and a once-problematic valuation could be weighing on market support. One thing that fuboTV is getting right through the stock's sell-off is pick up the pace. FuboTV saw pro forma revenue rise 73% in the third quarter. It followed that up with 98% growth for the fourth quarter, and the midpoint of its guidance calls for 100% year-over-year growth for the quarter that ended last month. Sooner or later the market's going to reward accelerating growth.

Making diehard gamers looks good in more ways than one is fueling a surge in Corsair Gaming. The peripherals maker that makes stylish high-performance PC components for the do-it-yourself crowd is riding the coattails of the streaming revolution.

Between Corsairs's memory products and liquid cooling kits that glow inside glass-encased PCs to decks that live streamers rely on to enhance the production quality of their videos Corsair is at the intersection of a lot of hot trends.

It's all paying off for Corsair. Revenue soared 55% last year after a 17% advance in 2019 and a mere 10% uptick the year before that. Corsair is warning that growth will slow substantially in 2021, but any gamer knows that underselling your potential is the best way to take your competition by surprise.

HubSpot, fuboTV, and Corsair Gaming are living up to their billing as growth stocks. Good things happen when there's some weight on the accelerator.

This Software Company Could Post Double-Digit Growth Next Year