The automaker will launch a new electric-only sub-brand in 2022 with a small SUV similar to the RAV4.

Toyota is establishing a new sub-brand, called Toyota bZ, to distinguish fully electric vehicles among its mainstream Toyota-brand offerings. The company said that "bZ" stands for "beyond Zero,' emphasizing that the company's goal is to provide its electric-vehicle customers with added value beyond the zero-emissions designation.

Seven of the upcoming 15 new BEVs will be Toyota bZ models, the company said. Some or all of the remainder will likely be models for the company's Lexus luxury brand, though Toyota didn't share specifics.

Toyota on Monday unveiled a "concept" version of the first bZ model, a compact crossover SUV called the bZ4X Concept, at an auto show in Shanghai. (Here, "concept" means that some small details could change before production begins, but the vehicle on display is very close to the vehicle that the company plans to build.) 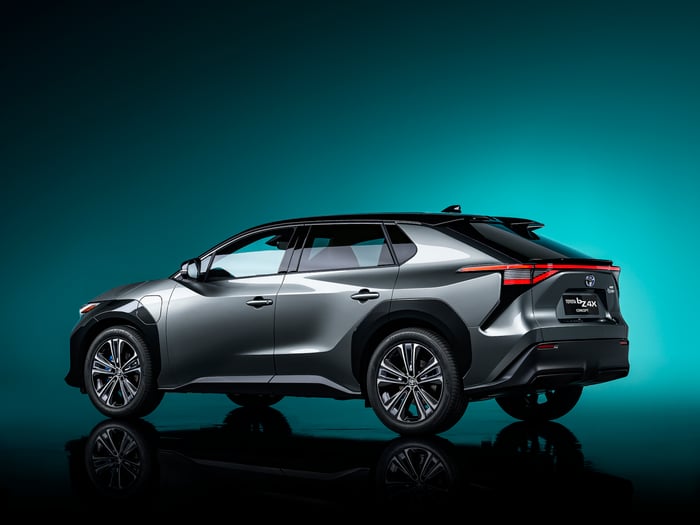 The Toyota bZ4X Concept previews an electric vehicle jointly developed with Subaru. It'll go on sale around the world in about a year, Toyota said. Image source: Toyota Motor.

While it's similar in size and shape to the company's huge-selling RAV4 crossover, Toyota emphasized that the bZ4X will be built on an entirely new electric-only modular vehicle architecture developed jointly with Subaru (FUJHY -1.87%). Toyota will manufacture the bZ4X in Japan and China; it will go on sale in Japan, China, the United States, and Europe in mid-2022.

Toyota didn't share details of the bZ4X's range or battery size, though it did say that the vehicle will have all-wheel-drive capability enabled by a new system developed with Subaru's off-road expertise.

Toyota said that its total lineup of electrified vehicles, including hybrids and fuel-cell electrics, will reach about 70 models worldwide by 2025.