Please ensure Javascript is enabled for purposes of website accessibility
Log In Help Join The Motley Fool
Free Article Join Over 1 Million Premium Members And Get More In-Depth Stock Guidance and Research
By Alex Carchidi - Apr 20, 2021 at 7:09AM

They're both innovating in attractive areas where there's no competition on the radar.

There are two plays that every biotech investor should know. The first is to buy stock in a company that's very new but that is targeting an unexploited and niche market, typically in the form of a rare and untreated disease. It's a risky move, but when it pays off, it pays off big. In contrast, the second strategy is to invest in an older company that's on the verge of approval with a product targeting a similar market, which is much less risky, but potentially less rewarding.

Today, I'll be discussing one stock for each of these plays. If finding the 10-bagger of tomorrow is up your alley, buckle up. 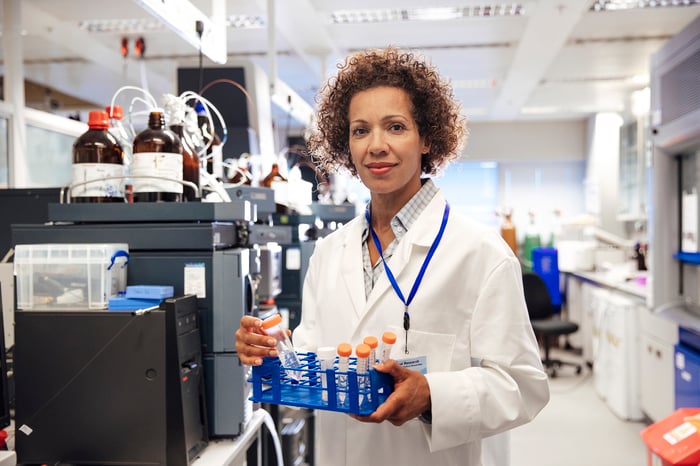 Edgewise Therapeutics (EWTX 1.51%) is a small and nimble biotech that's fresh off its initial public offering (IPO) late last month. The company has a tightly focused pipeline targeting the muscular disorder space, and its lead program, EDG-5506, is a muscle stabilizer drug intended to treat conditions like Duchenne muscular dystrophy and Becker muscular dystrophy. So far, EDG-5506 has been shown to dramatically reduce markers for muscle damage in animal models in preclinical testing, but there's still a lot of work to be done before it can be tested in human patients with the disorder.

These dystrophies are lucrative to treat, as there are currently no therapies for them on the market, and the company may be eligible for development aid from the government in the form of an orphan drug designation. Edgewise EDG-5506 is still in its phase 1 clinical trials, and the company also has three other programs in preclinical testing. So, much of its future is riding on how much progress it can show with the funds that it has on hand.

Right now, it has around $202 million in cash from the IPO, which is a tidy sum for its age. Overall, the biggest reason to consider buying this stock right now is that it's at the very start of its growth journey, which could be very substantial. Especially if Edgewise can get the early-stage data it needs to get a buy-in from larger collaborators or a special designation from regulators, the company will grow in value for as long as it can make progress in the clinic.

Unlike Edgewise Therapeutics, Humanigen (HGEN -7.34%) is a more mature company, boasting a handful of late-stage clinical trials in its field of immuno-oncology. But aside from one program, it doesn't focus on making drugs that target cancers directly. Instead, the company's headliner pipeline projects are intended to stop a sometimes-deadly immunotherapy side effect called cytokine storm. In a nutshell, that means its drugs could become must-buy emergency tools for oncology clinics that want to use cutting-edge therapies with as little risk to patients as possible.

Given that immunotherapies have become more and more common over the last decade, there will likely be an increasing demand for therapies like Humanigen's. But there's another major catalyst for growth in the anti-cytokine storm therapy market: COVID-19. Severe coronavirus infections are associated with cytokine storms, and the company is moving fast to provide a solution. So far, there's no other approved products in the space, which makes its project all the more compelling.

Its antibody therapy lenzilumab was shown in a phase 3 clinical trial to reduce the risk of hospitalized coronavirus patients needing ventilators or dying by 54%. That's great news, and it also means that the drug could be given emergency use authorization in a few months. So, investors could start to see new revenue from sales of lenzilumab before the end of 2021, which is a strong argument for purchasing the stock now.