Please ensure Javascript is enabled for purposes of website accessibility
Log In Help Join The Motley Fool
Free Article Join Over 1 Million Premium Members And Get More In-Depth Stock Guidance and Research
By Rich Duprey - Apr 21, 2021 at 9:45AM

Sports wagering has enjoyed phenomenal growth over the past year.

Sports betting is one of the fastest growing areas of online gambling, which itself was all that managed to keep casinos afloat during the pandemic, and New Jersey has quickly become the sports betting capital of the country.

Both FanDuel and DraftKings (DKNG 0.86%) dominate the space, owning nearly two-thirds of the market share between them, but data from analytics firm M Science shows world-class casino operator MGM Resorts (MGM 3.63%) is quickly gaining ground on the leaders as more consumers migrate to its mobile betting platform. 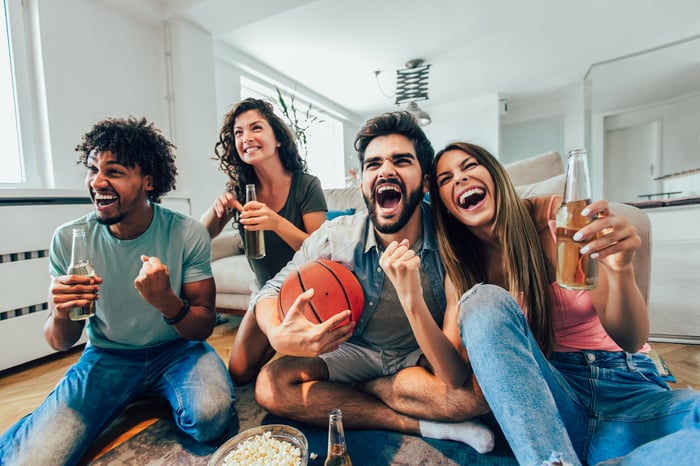 At the end of March, BetMGM had a nearly 16% market share and was the only sports betting and online gambling outfit that had steadily grown over the past year.

To see if MGM can keep the momentum going, and whether it might overtake DraftKings or Flutter Entertainment's (PDYPF -2.45%) FanDuel, let's use the wisdom of crowds by turning to Motley Fool CAPS, the 60,000 active member-driven investor community that translates informed opinion into stock ratings of one to five stars.

Based out of Dublin, Ireland and trading over-the-counter with very little volume in the U.S., CAPS players haven't had the opportunity to weigh in on FanDuel parent Flutter Entertainment just yet.

However, it is far and away the leader in sports betting and internet gambling, and says it generates more revenue than its next two biggest competitors combined. It also owns properties including PokerStars, BetFair, FOX Bet, and TVG, an online horse and greyhound racing television network.

A year ago FOX Bet had a better than 10% share of the market, but it has since slid to just 2%. Flutter, though, is considering an IPO in the U.S. for the FanDuel daily fantasy sports and sports betting operation, but it expects just a small percentage of the business will actually be made available.

DraftKings is the second biggest sports betting outfit in the country and has been deemed a "must-own" stock by Wall Street if an investor wants to capture the enormous potential this market represents.

It went public a little over a year ago through a reverse merger with a special purpose acquisition company, or SPAC, and is now active in a dozen states, more than any other player. That positions it to benefit from what analysts are calling a "megatrend" for the coming decade.

There are 21 states with some form of sports betting, but it could become legal in almost 40 states if all of the measure under consideration in state legislatures were passed.

That could be why DraftKings has garnered such high praise from the CAPS community. Some 96% of those rating the daily sports fantasy and sports wagering outfit believe it will outperform the market and over 97% of the All-Star players weighing in think it will as well.

DraftKings stock is down 20% from the high it hit last month even as it has quadrupled over the past year. With analysts forecasting 30% annual earnings growth over the next five years, this sports betting leader will still be in the mix.

No doubt the BetMGM online gaming app is being weighed down by the baggage it's had to carry for MGM Resorts physical casinos. With their business shut down for a good portion of last year and operating now with only limited capacity, MGM's full potential isn't being realized. That's not the case with the resort operator's betting platform, though.

M Science data shows BetMGM is surging, and has been for the past year, recording monthly gains in market share that is now accelerating. It's gone from 0.7% a year ago to over 15% today and has notched double-digit increases for the past two months.

Part of the growing popularity of BetMGM is the report operator has tied its use to its loyalty program M life Rewards, allowing members to earn credits for bets placed, whether they're online or in person at one of its casinos sportsbooks. MGM's Borgata is the third biggest sportsbook in New Jersey, generating some $13.4 million in year-to-date sports wagering revenue.

While more than 82% of CAPS players rating MGM think it can outperform the market, especially after its casinos are allowed to fully operate again, there continues to be that overhang, even in Macao, China, the world's largest casino market.

Sports betting may continue to be the foundation of the empire it is building.