The market seemed to defy logic in late January, when the WallStreetBets subreddit became a platform for organizing retail investors against short-sellers. In the frenzy of actions that followed, a number of companies that seemed long past their primes saw their share prices spike temporarily, despite a lack of any significant improvements to their underlying businesses. And those surges didn't just affect well known companies. Virtually any stock with a high percentage of its shares sold short had the potential to be pumped up with dramatic short-term gains as retail traders attempted to create short squeezes.

Ligand Pharmaceuticals (NASDAQ:LGND) was one of the lesser-known stocks that benefited from all of this. There are several reasons to believe the drama is over for the biopharmaceutical. But that doesn't mean there aren't still reasons to buy the stock. 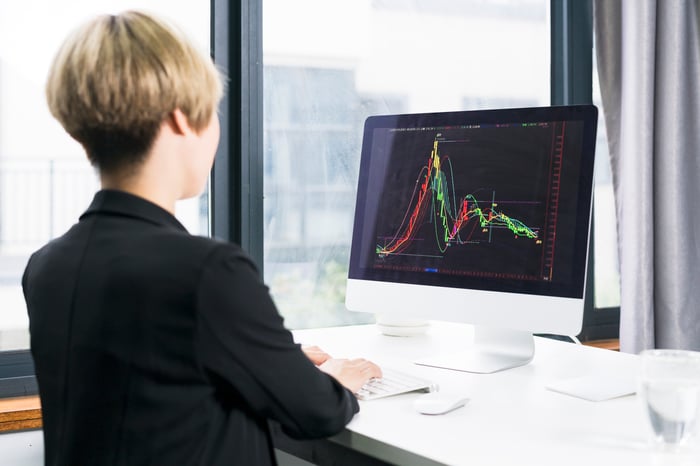 When someone sells a stock short, they are betting its price will decline. The mechanics can seem complicated, but it's relatively straightforward. Being "short" means that an investor has borrowed stock they don't own, and then sold it in the hopes that they'll be able to buy it back at a cheaper price later in order to return it to the entity from whom they originally borrowed it.

If the stock price goes down, that scenario plays out as planned and the short-seller profits. If the stock price goes up, the trader still has to buy back the shares to return them, and therefore loses money. When a lot of short-sellers are in positions where they're going to lose money on a specific stock, it can create a buying frenzy as they seek to close their positions and limit their losses, which pushes the stock's price up still further.

That's called a short squeeze, and it's what happened earlier this year to Gamestop and AMC Entertainment, as well as some lesser-known companies like Ligand Pharmaceuticals.

From 2014 through the middle of 2018, about 20% of Ligand's outstanding shares were sold short. That rocketed to 67% over the next year. The jump got the attention of the Reddit crowd, whose relentless buying more than doubled the stock's price from where it began 2021. Though the feedback loop of the short squeeze ran out of fuel and Ligand's stock price headed back downward, it is still up 45% year to date, but the percentage of shares outstanding that are sold short has dropped to less than 10%.

Ligand's goal is to be a high-growth business driven by royalty contracts. During February's earnings call, CEO John Higgins outlined four key areas of strength for the company: its antibody discovery platform, its work with Gilead Sciences (NASDAQ:GILD), acquisitions, and financial performance. Let's consider them one by one.

OmniAb, the company's antibody discovery platform, uses artificial intelligence and genetic engineering to produce fully human antibodies from animals. More than 40 biopharmaceutical companies and universities are customers, using these antibodies in research. Management expects a Chinese company to receive the first ever approval of a drug developed using the OmniAb platform this year.  Antibodies are in high demand; the success rate of medicines developed with them is nearly twice that of small-molecule drugs.

Capitsol is another Ligand product. It's designed to improve the stability and solubility of drugs. The ingredient is a key component in Gilead's Veklury (remdesivir) treatment for COVID-19. It's widely used in drug development, where Amgen, Eli Lilly, Merck, Pfizer, and Bristol-Myers Squibb are also customers.

Growth through acquisitions has been a core part of Ligand's business strategy over the years. The company bought OMT (the developer of OmniAb) five years ago, and CyDex Pharmaceuticals (which owned Captisol) a decade ago. In the past year, management stuck to that strategy, acquiring Pfenex, which had developed a valuable protein-expression platform, and buying the assets of Icagen, including an ion-channel platform. Both are expected to bolster Ligand's antibody business.

And finally, there's the company's financial performance. It grew revenue 55% to $186.4 million in 2020, while adjusted net income was $4.55 per share, up from $3.09 in 2019. Ligand expects to continue adding more partners and collecting more milestone payments this year. In fact, management raised its 2021 guidance to $291 million in revenue and $6.15 in adjusted EPS, which would represent annual increases of 56% and 35%, respectively. With that type of performance, you might be surprised to find shares trading at only 23 times adjusted 2021 earnings.

3. Management is willing to buy back shares

Since 2018, Ligand has reduced the number of shares outstanding by 22%. During November alone, the company repurchased nearly $5 million in stock at $84 per share, significantly below where it currently trades. 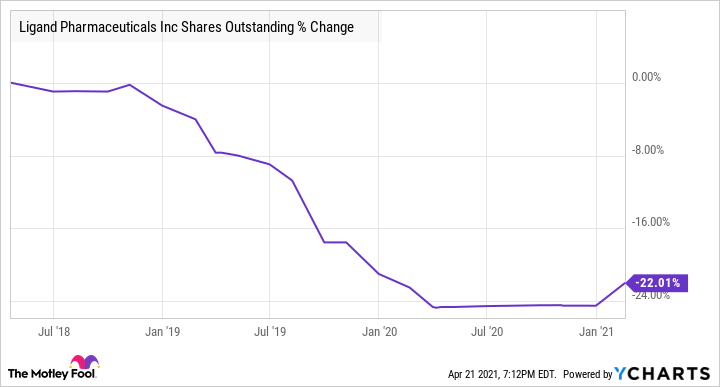 Though the company has recently expressed more interest in spending on acquisitions and retiring debt, Ligand still has considerable excess cash, and management believes shares are significantly undervalued. The recent deals and impressive financial results, plus management's clear willingness to deploy cash on share buybacks, are likely to dampen any further interest in shorting the stock.

Ligand's stock price in early 2021 took a roller-coaster ride. That said, the company has been consistent in its execution. It has delivered revenue and profit growth, and appears ready to add partners and royalties as products hit the market. With a forward price-to-earnings ratio that's half its growth rate, it's easy to argue that Ligand stock is cheap.