On May 6, investors will find out how the COVID-19 pandemic affected the meat-substitute maker's first-quarter 2021 results.

Beyond Meat (BYND 7.18%), the leading maker of plant-based meat substitutes, is slated to report its first-quarter 2021 results on Thursday, May 6, after the market close. An earnings call is scheduled to follow at 5 p.m. EDT.

Investors will probably be approaching the company's report with cautious optimism. In the last two quarters, revenue growth was anemic, and both the top and bottom lines missed Wall Street's expectations. Moreover, the company's facing a tough comparable, as revenue soared 141% year over year in the first quarter of 2020. That result was driven in part by consumers beginning to stockpile food following COVID-19-pandemic-driven stay-at-home orders being issued last March across much of the United States.

So where does the optimism come in? Beyond Meat's food-service business should start to recover from being torpedoed from the global crisis. States across the country, as well as countries around the globe, have been increasingly opening up their economies. Moreover, last quarter, the company announced two big partnerships -- with McDonald's and Yum! Brands (which owns KFC, Pizza Hut and Taco Bell) -- and investors are enthused about the long-term growth potential from these collaborations. 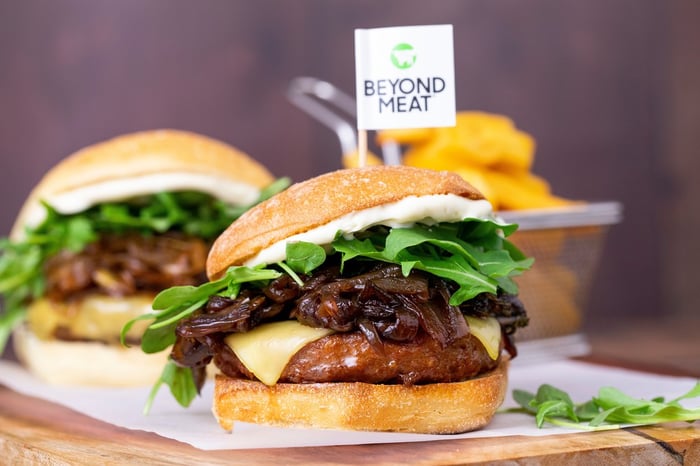 If Beyond Meat's revenue increases in the ballpark of 17% year over year (which equates to 12% sequential growth), as analysts expect, that would be its best revenue performance since the second quarter of 2020. In that quarter, revenue surged 69% year over year to $113.3 million, driven by consumers loading up on frozen protein sources during the early stages of the pandemic.

Beyond Meat's bottom-line results have been moving in the wrong direction and that dynamic is expected to continue in the first quarter, as the above chart shows. There are a few reasons for this: The company is investing in capital-intensive growth initiatives, it has increased promotional activities intended to entice more new consumers to try its products, and the pandemic has hurt efficiencies.

It would be a good sign to see at least a little improvement in the food-service results.

The stock market looks ahead, so any post-earnings release move in Beyond Meat's stock will probably hinge more on the company's Q2 outlook (assuming it issues one) than its Q1 results, relative to Wall Street's expectations.

For the second quarter of 2021, Wall Street is currently modeling for revenue of $143.5 million, representing growth of 27% year over year. On an adjusted basis, analysts expect Beyond Meat's loss to widen to $0.11 per share, from $0.02 per share in the year-ago period.