Please ensure Javascript is enabled for purposes of website accessibility
Log In Help Join The Motley Fool
Free Article Join Over 1 Million Premium Members And Get More In-Depth Stock Guidance and Research
By Selena Maranjian - Apr 24, 2021 at 10:43AM

You might be surprised how achievable this lofty goal is.

It's fairly easy to go from having $1 million to being broke. You might buy one fancy house or several modest ones. You might buy a fancy car, fly first class on a trip around the world, and prepay college tuition for all your kids. You might even just spend a crazy weekend in Las Vegas.

It's harder to go in the other direction, though, turning a net worth of $0 into a net worth of $1 million. It takes longer, too. But the important thing to understand is that it can be done. Here's how you can do it. 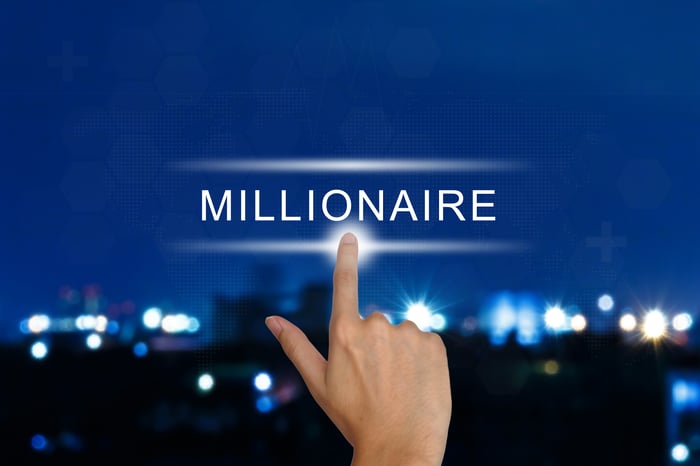 It's really all just a matter of math. Perhaps obviously, you'll get to a million dollars by saving and investing -- fairly aggressively and very regularly. The table below shows how long it will take you to reach approximately $1 million if you're saving and investing various sums each year. It assumes a growth rate of 8% in order to be somewhat conservative, since the average annual return of the stock market is close to 10% over many decades.

So how are you going to aim for that average annual growth rate of 8%? The best way, arguably, is to just invest in a good low-fee index fund, or a few of them. Here are a few index-based exchange-traded funds (ETFs) that can serve you well:

Over relatively short periods, such as 10 or even 20 years, the S&P 500 or broader markets might not average as much as 8%, and they might average more. There's no way to know. So try to hope for the best but plan for the worst.

It can help to be aggressive in your saving. If you're able to sock away $10,000 per year, see if you can do $12,000 instead. The earliest dollars you invest will have the longest time in which to grow for you, so it's not crazy to consider taking on a side hustle for a while, to earn extra early dollars. If you're carrying high-interest-rate debt, be sure to pay that off before investing, because you won't get ahead trying to earn 8% or 10% in the stock market while paying 20% or 25% annual interest on debt.

Once you have a good plan in place, stick with it. The most important factor in your success will be your determination.