Please ensure Javascript is enabled for purposes of website accessibility
Log In Help Join The Motley Fool
Free Article Join Over 1 Million Premium Members And Get More In-Depth Stock Guidance and Research
By Dave Kovaleski - Apr 24, 2021 at 9:10AM

Don't be fooled by the dip; this remains a great company in a growing industry.

It's been a great year for financial stocks -- the sector is up roughly 18% in 2021, second only to energy. So when you see a financial-services company like MarketAxess Holdings (MKTX 0.69%) among the worst performers on the S&P 500 -- down about 8% year to date through April 21, and now 3% more since it reported earnings Thursday -- it tends to raise a red flag. Why is it down relative to its competitors? 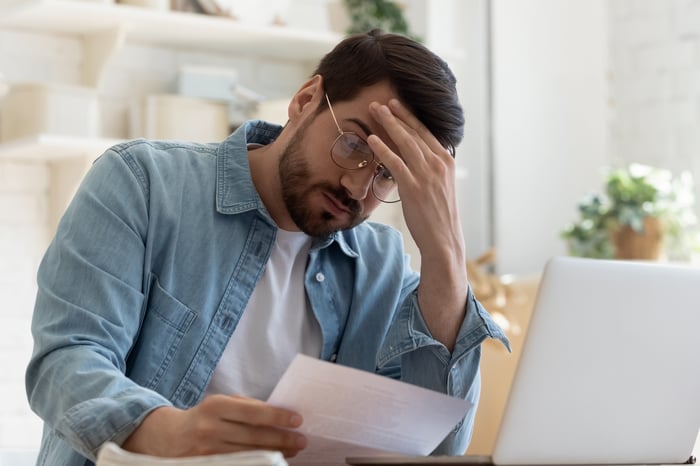 Strong revenue in the first quarter

Despite the stock's slump, MarketAxess, which provides an electronic platform for fixed-income securities trading, reported strong earnings for the first quarter. The company posted record revenue of $195 million, up 16% year over year. Operating income rose 14% to $103 million, while net income was $80 million, or $2.11 per share, up 8% year over year.

The performance was driven by record trading volume of $246 billion on MarketAxess' Open Trading platform, a 20% improvement from the previous year. The company was able to increase its market share of trading for U.S. high-grade credit to 20.5%, up from 20%, and U.S. high-yield credit to 15.6%, from 12.2%. This led to higher revenue, as MarketAxess gets a fee every time there is a trade on its platform. The company makes about 90% of its income from these fees.

"Market share gains are driving the volume and revenue growth as electronic trading continues to advance in fixed-income markets around the world," chairman and CEO Rick McVey said. "We are seeing positive signs in new product areas, and in all geographic regions, as we invest to support long-term growth. Trading automation continues to accelerate with both our investor and dealer clients."

So why is the stock down, given the company's strong performance?

While expenses increased 18.1% year over year, it was due mainly to higher head count as the company added new positions to keep up with its growth. There were also higher costs related to the acquisition of MuniBrokers, an electronic platform for municipal bond traders. The deal, which closed in April, will expand MarketAxess' muni trading capabilities beyond the U.S. to Europe, the U.K., and Singapore.

Both of these moves should be accretive to earnings and expand the company's growth, as its debt is relatively low and its margins are high, with an operating margin of around 54%.

More likely, the drop in share price was related to what a lot of tech stocks experienced in the quarter, a pullback after a long growth surge. MarketAxess has been in growth mode for the past decade, with a total return over that time of more than 3,000% and an annualized return of 41% -- without a single negative return year. Its price-to-earnings ratio reached a quarter-end high of 72 at the end of 2020. Now it is back at around 66, which is still higher than where it has historically been the past five years or so.

But this is a fintech with significant growth potential, as the first-quarter revenue numbers showed. As the market leader in electronic credit trading and one of only a few major players, MarketAxess is gearing up for a sustained run. Electronic trading will only grow in popularity, given the accelerating trends, and volumes should remain high.

So don't be scared off by the dip in the first quarter. MarketAxess is a great company in a growing industry with lots of growth ahead of it.